We are starting off with bright sunshine but chilly temperatures on this Sunday morning. Readings are generally in the lower and middle 30s across North and Central Alabama. A nice warm-up is in store, and you will notice winds picking up out of the southeast by mid-morning gusting to 20 mph at times through the day. Those winds are responding to surface high pressure over West Virginia this morning and a strong upper-level trough that is pushing our way from the west.

FOR YOUR SUNDAY: Skies have been mostly sunny, but clouds will increase rapidly by mid-afternoon and become mostly cloudy across the area by early evening ahead of an approaching cold front. Highs this afternoon will be in the upper 50s across North Alabama, near 60F along I-20, and in the lower 60s over South Central Alabama. 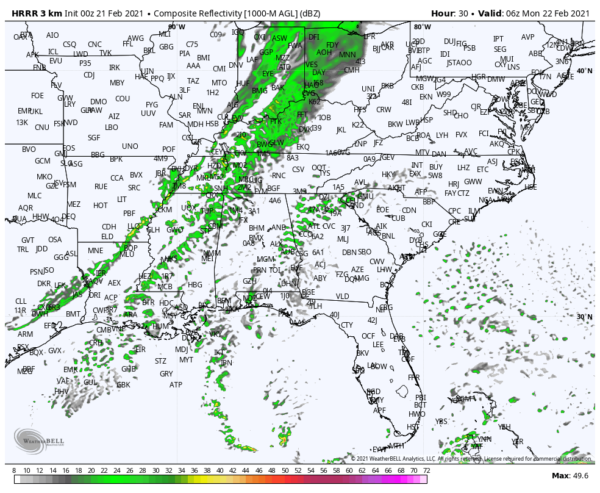 SHOWERS LATE TONIGHT: Before it is over, we may have three distinct bands of showers overnight. The first will be approaching Northwest Alabama by 9 p.m., with additional showers forming in the moisture advection over Southeast Alabama. The main line of showers will be along the front, which will be near Memphis shortly after midnight. Showers will be possible through the overnight hours across the entire state. Rainfall amounts will be light, less than one-quarter of an inch. Overnight lows will be in the lower 50s. Instability values will be minimal, and no thunder is expected.

MONDAY INTO MIDWEEK: The showers should be out of Central Alabama before noon. Cooler and drier air will move in behind the cold front. After morning lows in the 40s, highs on Monday will be in the 50s. We return to the 60s on Tuesday on Wednesday with a good supply of sunshine both days. Clouds will increase by late Wednesday ahead of our second cold front. A few showers will return Wednesday night into early Thursday morning.

END OF THE WEEK/WEEKEND: The showers will exit by noon Thursday. There are some differences in timing according to the models, so there is a bit of uncertainty here. The latest modelling indicates that another wave of more widespread rain will arrive Thursday night into Friday morning. Thursday highs will be in the upper 50s. Lows Thursday night will be in the 30s. Friday looks dry for now. Highs will be in the upper 50s. Saturday will be dry most of the day but a few showers will move into western Alabama by late in the day, mainly north of I-20. Clouds and rain will linger into Sunday with rain moving into the state Sunday night.

IN LIKE A LION? It is worth noting yesterday afternoon’s GFS did indicate that the rain will change to freezing rain and snow Sunday night across North and Central Alabama. While it is likely an outlier, it’s just worth noting.

BEACHCAST: It is the time of year when thoughts start turning to the weather along the beautiful beaches of Alabama and Northwest Florida. Highs in the 60s, lows in the 40s and 50s all week. Showers tonight and again Thursday. Readings will be approaching 70F by week’s end. Water temperatures are in the upper 40s. Rip current risks are expected to be moderate all week.

ADVERTISE WITH US: Deliver your message to a highly engaged audience by advertising on the AlabamaWX.com website. The site enjoyed 20 MILLION page views in the past 12 months. Don’t miss out! We can customize a creative, flexible, and affordable package that will suit your organization’s needs. Contact me, Bill Murray, at (205) 687-0782, and let’s talk.

WEATHERBRAINS: This week, the panel will entertain NHC Director Ken Graham on a special Monday morning show that will be recorded at 9 a.m. Check out the show at www.WeatherBrains.com. You can also subscribe on iTunes. You can watch the show live at live.bigbrainsmedia.com or on James’ YouTube Channel You will be able to see the show on the James Spann 24×7 weather channel on cable or directly over the air on the dot 2 feed.

ON THIS DATE IN 1971: Massive tornado outbreak in the Delta region of northeastern Louisiana and Mississippi. The first major tornado touched down that day at about 2:50 p.m. in Louisiana and crossed into Mississippi. 46 were killed by this twister, which struck the towns of Dehli and Inverness. 121 people lost their lives that day, including 110 in Mississippi. Three of the tornadoes caused 118 of deaths. Three of the storms were F4s. 1,600 were injured. Follow my weather history tweets on Twitter. I am @wxhistorian at Twitter.com.