Departing rain showers made a perfect backdrop for the beautiful Protective Stadium in downtown Birmingham last night as the new United States Football League kicked off its season. The inaugural game, between the Birmingham Stallions and the New Jersey Generals, was played in fine conditions as the rain left the area before kickoff. And an exciting game it was, with the Stallions mounting a drive in the final two minutes to win the game. Tripleheader at Protective today as all of the league’s regular-season games will be played here. But today is Easter the holiest of days for Christians and a revered holiday around these parts. My very best wishes to those observing Passover, Ramadan, and Easter.

EARLY FOG: Skies cleared last night in the wake of the afternoon rains, and dense fog has formed in many areas. Be careful if you have to be driving early this morning before the fog dissipates. Dense fog advisories are in effect for all of North and Central Alabama.

RAIN AND STORMS TODAY: An active split flow in the jet stream pattern is keeping our weather active as well, with frequent, fast-moving shortwaves in the southern stream. Yesterday’s rain and storms were a result of one of those disturbances, as so will today’s be. Rain and storms are already breaking out early this morning over northern sections of Alabama, and rain and storms will increase through the morning hours, continuing through the afternoon. It won’t rain all day, but you should see a couple of waves of rain and storms at different times. The rain should move out by mid to late afternoon. Highs today will be in the upper 60s northwest, with readings between 70-72F across a wide part of the rest of North and Central Alabama. Upper 70s to near 80-degree readings will be measured in the southern part of the area and South Alabama. 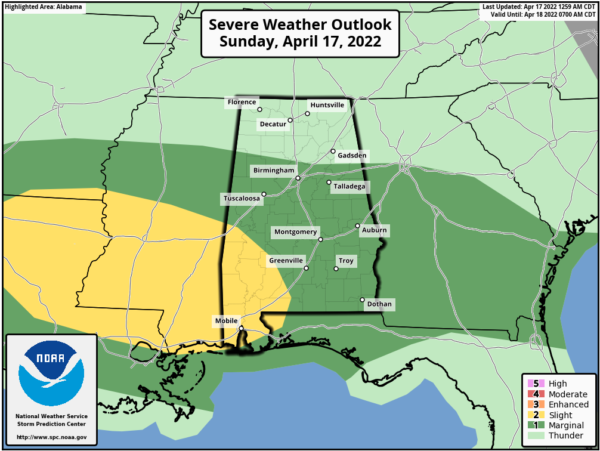 SEVERE THREAT TODAY: There is a slight risk (level 2 out of 5) across the southwestern part of Alabama, with a marginal risk (level 1 out of 5) south of a line from Vernon and Fayette to Pelham to Lafayette. The main threat will be damaging straight-line winds and some severe hail in areas. There is a low-end tornado risk from northern Louisiana through Central Mississippi into extreme Southwest Central Alabama, including parts of Choctaw, Washington, Clarke, and Marengo Counties. So not a big threat, but something that bears monitoring between noon and the early morning hours on Monday.

WAIT, STORMS INTO MONDAY MORNING: Yes. Another batch of showers and storms will enter northern Alabama before midnight. Storms will swing through the Birmingham metro area between 1 and 3 a.m. There is some chance these storms could exhibit severe characteristics including hail and high winds. Overnight lows will be in the 50s over the northwestern half of the state, with 60s to the southeast.

RIDGING FOR THE WEEK AHEAD: High-pressure ridging will build in quickly behind the departing shortwave that will be responsible for today and tonight’s rain and storms. Look for clearing skies Monday with a high near 70F, near-total sunshine and upper 60s to lower 70s Tuesday, and a warming trend through the remainder of the week. 80s will be common by Thursday, with highs in the middle 80s next weekend for football and…

TALLADEGA: The NASCAR guys will be tearing around the track in Talladega next Sunday, and the weather looks great. Partly cloudy skies and very warm conditions, with temperatures in the 80s for the big race. Lows Sunday morning will be in the balmy 60s.

TURNING THE PAGE on the calendar, the following week looks like rain and storms return on Monday the 21st. Dry conditions will follow and look like they will be the norm through the remainder of that week.

BEACHCAST: Once we get past today, it will be a superb week to visit the beautiful beaches of Alabama and Northwest Florida. Highs in the 70s all week with lows in the 50s Tuesday and Wednesday morning. After that, lows will be in the 60s into the weekend. Water temperatures are running in the upper 60s.

TRAGEDY ON DAUPHIN ISLAND: A teenaged girl from Mississippi passed away this week in a Mobile hospital after being airlifted from Dauphin Island after being rescued from a rip current. Over 100 people lose their lives every year because of rip currents, including several on average along the beautiful beaches of Alabama and Northwest Florida. Check out the NWS Rip Current Safety Toolkit at weather.gov/safety/ripcurrent

TROPICS: Interestingly, this week is the anniversary of the first tropical storm to be named in April, Ana back on April 20, 2003. Arlene occurred in April 2017, the most recent named storm in the fourth month. And it could happen again this year. A surface trough over the Bahamas is causing widespread shower and thunderstorm activity. A surface low may form by Monday, but it will be in a hostile environment thanks to strong wind shear. There is a small chance that it could become a subtropical or tropical storm. If it does, it would be named Alex.

WEATHERBRAINS: This week, the panel will entertain Chance Hayes, the Warnings Coordination Meteorologist at the NWS Tulsa. He will actually conduct a SKYWARN spotter training session on the show. There will be lots of interesting conversations also about the tornado emergency issued by the NWS Memphis Friday night for the Jonesboro AR area. Check out the show at www.WeatherBrains.com. You can also subscribe on iTunes. You can watch the show live at live.bigbrainsmedia.com or on James’ YouTube Channel You will be able to see the show on the James Spann 24×7 weather channel on cable or directly over the air on the dot 2 feed.

ON THIS DATE IN 1944: Weather forecasters played a huge role in planning the Allied invasion of Normandy. The first decision was what time of year to stage the invasion. Examination of historical weather records indicated that the best odds for favorable conditions would exist in June. A prelmnary date of May 31st was chosen with weather to determine the exact date. A joint Allied meteorological team consisting of British and American forecasters was established in April with orders to begin creating trial forecasts for the invasion. On this date, the forecasters made their first official presentation of a 5-day forecast to the Allied Commanders. A correct weather forecast would be critical to the success of the invasion on June 6th.Follow my weather history tweets on Twitter. I am @wxhistorian at Twitter.com.

7:00 AM | ***Winds can gust to 50 mph from later tomorrow into tomorrow night surrounding arrival and passage of a strong cold front*** — Arcfield Weather