Saturday was a gorgeous day across Alabama. It started off chilly, with plenty of 30s along with some lower and middle 40s. The coldest reading in the state was 34F, measured at Valley Head and Vinemont. Several spots checked in with 35F, including Gadsden and Haleyville. It was 39F at Tuscaloosa, 40F at Birmingham, and 42F at Anniston. Under crystal clear blue skies, temperatures warmed nicely into the upper 60s and lower 70s in most locations. About the only thing that marred the day at all was some smoke from a prescribed burn to the south of Tuscaloosa. Readings this morning are not as cool, mainly in the middle 40s to lower 50s, but the day will be just as beautiful. 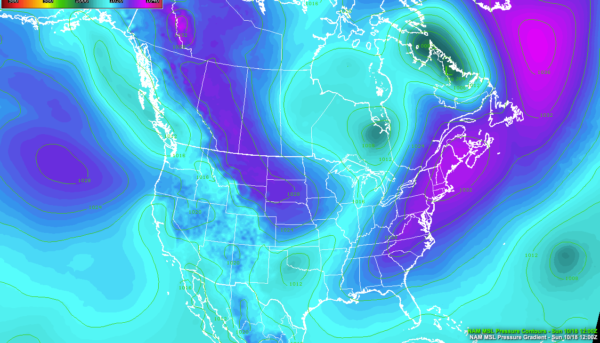 ON THE WEATHER MAPS: A broad upper-level trough covers much of the United States this morning, leading to cool temperatures across the Rockies, Midwest, and much of the East. At the surface, big high pressure over the Northeast is ridging all the way down the Appalachians into the Southeast. A surface low is straddling the Red River between Texas and Oklahoma. A strong low-level jet that was present overnight from Texas into the Great Lakes has diminished this morning, but some residual gusty winds may work their way to the surface early today across western Alabama.

SUNDAY PERFECTION: If you liked yesterday, you will love today as well. Mostly sunny skies are greeting the day with those comfortably cool readings. The ridge will break down enough this morning, which will allow southeasterly winds to return, and moisture levels will start to rise again. By the time the afternoon is out, high temperatures will top out in the middle 70s North, and upper 70s Central. Lows tonight will be in the upper 50s generally area-wide with those higher dewpoints in place.

SETS THE STAGE…for a nearly perfect week. It will be warm, increasingly humid, but dry through the workweek. Skies will be partly cloudy each day Monday through Thursday, with highs in the lower 80s each day. Lows will warm into the lower 60s by Wednesday morning after upper 50s for Monday and Tuesday. Humidity levels will be on the rise as well, with dewpoints back up in the uncomfortable range by Wednesday.

WEEKEND OUTLOOK: By Friday, the ridge will have given up enough control to allow a few showers and storms to return to the Alabama landscape. At the same time, a cold front will be approaching from the northwest. Showers and storms will be likely Friday night, and they will continue into Saturday as the front runs out of steam across Alabama. Highs on Saturday and Sunday will be limited to the 70s.

VOODOO COUNTRY: Another front will make a run at the area early in that following week, but it should be mainly dry. It will set the stage for dry conditions during the remainder of the extended forecast period through the first couple of days of November. Temperatures after the second front will fall back to the upper 60s and lower 70s, right around normal for late October and early November in Alabama.

TROPICS: We warned that the tropics were not done yet, and indeed it appears they aren’t. A surface low about 4000 miles southeast of Bermuda is tracking slowly southwestward and has a pretty good chance to become a tropical or subtropical storm in the coming days. It will probably be with us much of the week before it moves on out to the northeast. We still will be watching for a tropical system to form over the western Caribbean. It likely will become a tropical storm and probably a hurricane, moving it over Cuba and the Bahamas. Its eventual track is uncertain, as the ridge cold build back to the north of the system and force it back to the southwest again. But if it does, it will likely weaken. Right now, no U.S. impact is expected.

BEACHCAST: It should be another gorgeous week along the beautiful beaches of Alabama and Northwest Florida. Lows will be in the upper 60s, with highs in the lower 80s through midweek along with a good supply of sunshine each day. Showers and storms will return by Friday into the weekend, but it will remain warm. Water temperatures are still in the middle 70s. The rip current risk will be high much of the week.

NATIONALLY: The first accumulating snow of the season fell across the Arrowhead of Minnesota yesterday afternoon and evening. Winter weather advisories are in effect for much of Montana where 3-7 inches of snow will fall between now and Monday afternoon.

DANCING WITH THE STATS: We are one wet day and the remnants of Hurricane Delta from a dry month at Birmingham. 2.23 inches of rain so far for October, with around another one-half inch to go, which will put us short of the normal of 3.44.
ADVERTISE WITH US: Deliver your message to a highly engaged audience by advertising on the AlabamaWX.com website. The site enjoyed 19.6 MILLION page views in the past 12 months. Don’t miss out! We can customize a creative, flexible, and affordable package that will suit your organization’s needs. Contact me, Bill Murray, at (205) 687-0782, and let’s talk.

WEATHERBRAINS: This week, the panel was busy, putting two shows in the book in advance of James’ vacation this week. The first featured Penn State researcher Dylan Steinkruger, talking about Artificial Intelligence and tornado warning guidance. Then, the show that will be released Monday night featured Dr. Mike Farrar, one of the leading weather model experts in the world. Check out the show at www.WeatherBrains.com. You can also subscribe on iTunes. You can watch the show live at live.bigbrainsmedia.com or on James’ YouTube Channel You will be able to see the show on the James Spann 24×7 weather channel on cable or directly over the air on the dot 2 feed.

ON THIS DATE IN 1906: Developer Henry Morrison Flagler built opulent resorts along the East Coast of Florida, connected by his Florida East Coast Railway. Flagler’s railway was being extended from Miami to Key West. Construction crews began work on the massive project in 1903. Despite warnings from local residents who knew the signs of the approaching hurricane, the workers remained in their houseboats on the evening of the 17th as the storm lunged toward South Florida. were living on houseboats and in camps through the Keys. One of the flatboats was ripped from its moorings at Long Key about 7:30 a.m. on the 18th and swept out to sea where the boat was smashed to pieces, drowning over 100 workers. More workers died when another steamer sank. Over 130 FEC workers were killed by the hurricane. The tragedy was eerily predictive of the deadly 1935 Labor Day Hurricane which caught hundreds of veterans working on bridges that would link Lower Matecumbe Key with No Name Key and complete the Overseas Highway, which paralleled the FEC from Miami to Key West. At least 252 veterans died. The Overseas Railroad would finally be completed in 1912. Follow my weather history tweets on Twitter. I am @wxhistorian at Twitter.com.