Happy Father’s Day and Happy Juneteenth everyone! Heat is the weather story across Alabama over the next week to ten days. A sprawling ridge of high pressure will remain in control of our weather for much of the foreseeable future. Let’s see how hot it might get.

A COMFORTABLE START: Temperatures this morning across the northern and central parts of Alabama are in the upper 50s to middle 60s. These readings are some 5-10 degrees below normal and are thanks to a trough of pressure over the northeastern United States that has delivered a refreshing load of drier and slightly cooler air down the East Coast and into the Deep South. Low temperatures are near record territory across the Mid-Atlantic, Northeast, and Ohio Valley. 40s are being recorded in places like Charleston WV this morning. Highs this afternoon will be in the mid to upper 80s over North Alabama, with readings near 90F across Central Alabama. Overnight lows tonight will be in the 60s again, but those readings are going to be rising in coming days as moisture levels rise.

THE WEEK AHEAD: As the high-pressure system flexes its muscle across the eastern half of the country, the mercury will be soaring underneath it. North and Central Alabama will see temperatures in the middle 90s Monday afternoon, with readings approaching 100F by Tuesday, Wednesday, and Thursday. Regional radars will get most of the week off across the area. A few showers and storms may show up Thursday and Friday afternoon, but they will be very isolated and far between. Rain chances will increase over South Alabama during the weekend.

LONGER RANGE LOOK: It appears that the pattern will change just enough during the last week of June to allow higher rain and storm chances across the area. But the end result will be below normal rainfall totals across the area over the next two weeks.

VOODOO TERRITORY: The period leading up to the Fourth of July looks wetter and cooler. I am sure we will be ready for that by then.

BEACHCAST: The week ahead will be hot and dry along the beautiful beaches of Alabama and Northwest Florida. Highs will be in the upper 90s to near 100F. Water temperatures are in the middle 80s. 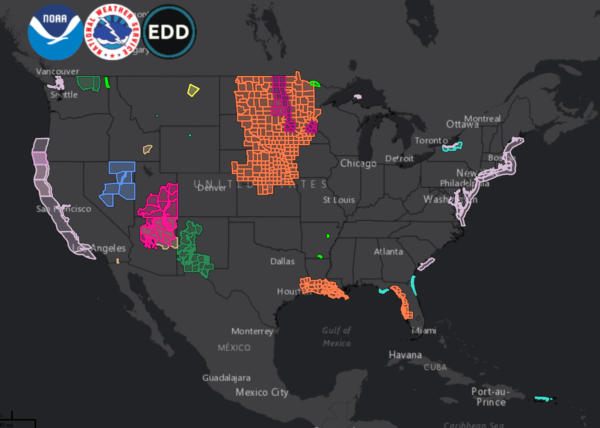 NATIONALLY: Heat advisories and excessive heat warnings cover much of the Northern Plains and Upper Midwest. Meanwhile, there are frost advisories in northeastern Nevada.

DANCING WITH THE STATS: 101F at Mobile yesterday was a record by 1 degree. The 100 degree reading at Pensacola tied the record for the date.

WEATHERBRAINS: This week, the panel will entertain. Check out the show at www.WeatherBrains.com. You can also subscribe on iTunes. You can watch the show live at live.bigbrainsmedia.com or on James’ YouTube Channel You will be able to see the show on the James Spann 24×7 weather channel on cable or directly over the air on the dot 2 feed.

ON THIS DATE IN 1972: Hurricane Agnes moved ashore in the Florida panhandle as a weak Category 1 storm. The highest wind reported on the Gulf Coast was a gust to just 56 mph at Apalachicola, Florida. The $10 million in damage in the Florida Panhandle was just a drop in the bucket. Agnes’ main damage would come two days later as the remnants of the storm brought tremendous rains and flooding to parts of the Northeast. Richmond VA was hard hit. On June 22, Agnes’ torrential rains deluged parts of Pennsylvania. The state capital of Harrisburg was inundated and the governor’s mansion flooded. 19 inches of rain deluged Wilkes-Baare PA, forcing the Susquehanna River over its 38-foot-high dikes. Hurricane Agnes’ five-day romp through the Atlantic seaboard made the storm the costliest natural disaster in the United States at that time. Damage was estimated at $3.5 billion and 134 deaths were reported from Florida to New York. Agnes would produce more damage than all tropical cyclones in the previous six years, including Camille.