A big winter storm is in store for much of the Northeast Corridor over the next two weeks as the system currently impacting Alabama wraps up into a strong nor’easter. The system will bring the heaviest snows of the season to the Megapolis between Washington, D. C., and Boston. Here in Alabama, it’s a turn to colder starting later today.

ON THE WEATHER MAPS: This morning, we find a ridge over the western United States, with a broad ridge over the eastern half of the country. The western ridge will amplify strongly over the next couple of days, and the trough over the eastern U.S. will deepen. At the surface, low pressure is near Vincennes, Indiana, along the Indiana/Illinois border. This low is tracking eastward and weakening. A new surface low will develop along the North Carolina coast. This low will deepen rapidly as it tracks up the East Coast, becoming a powerful nor’easter. By Tuesday, an extremely deep trough will extend from eastern Canada to North Carolina. A strong northwesterly flow will funnel cold air from southern Canada into the Southeast.

BIG SNOWS FOR THE MID-ATLANTIC AND NORTHEAST: Up to foot of snow could fall late tonight through early Tuesday in places like Washington, D.C., Philadelphia, and new York City, as well as interior New England, which high amounts will fall over parts of West Virginia, western Maryland, and eastern Pennsylvania. 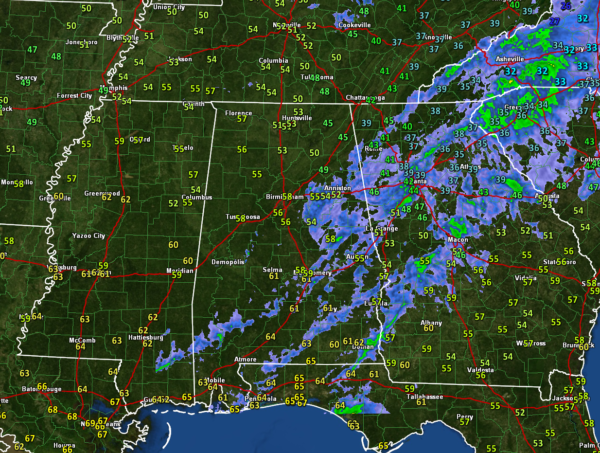 THIS MORNING ACROSS ALABAMA we find some clearing in the wake of the overnight showers as drier air aloft works its way across the state. Most of those showers have pushed to along and southeast of I-59 early this morning. There will be a few light showers later today ahead of the main cold front. Temperatures are in the middle and upper 50s across most of North and Central Alabama. The only 40s are found over Northeast Alabama. It’s windy, with winds gusting to 25 mph at times. Skies will become cloudy once again as we go through the afternoon hours. A strong cold front will push through the area this afternoon, reaching I-59 by mid-afternoon. Temperatures will quickly fall into the 40s behind the front. By Monday morning, temperatures will be near freezing over the Tennessee Valley, with middle 30s in the I-20 Corridor, and upper 30s over South Central Alabama.

BLUSTERY MONDAY: Tomorrow will mostly cloudy, windy, and sharply colder, with high temperatures struggling to get out of the 30s over the northern half of the state. Lows will be in the 20s Monday night. The gusty northwesterly winds will continue until early Tuesday and there will be a few snow showers over eastern Tennessee, western North Carolina, down into extreme Northeast Alabama.

TUESDAY AND BEYOND: Tuesday and Wednesday will be dry with highs mostly limited to the 40s on Tuesday, and moderating highs in the upper 50s on Wednesday. By late Thursday, low pressure will be forming across the Red River Valley between Texas and Oklahoma. Highs will be in the lower and middle 60s on Thursday, and showers won’t probably show up until Thursday night.

FRIDAY SHOWERS: Showers will overspread the state on Friday. After morning lows in the middle and upper 40s, highs will top out near 60F. It will be hard to scare up any instability across the area, but there could be just enough across West Central Alabama for some thunder by mid-afternoon. The rain will move out of the state Friday night. Precipitation amounts will range between one-quarter inch and 1.5 inches by Saturday morning. Overnight lows will be in the 40s.

WEEKEND OUTLOOK: It will be colder on Saturday and Sunday, with clearing skies. Highs will be in the 30s and 40s. Lows Sunday morning will be below freezing across the entire area.

VOODOO COUNTRY: The GFS hints at some freezing precipitation just to our north and northwest across parts of the Mississippi Delta and Tennessee Around the 10th and 11th. A lot will happen between now and then, but that’s a possibility.

BEACHCAST: A mild Sunday is in progress along the beautiful beaches of Alabama and Northwest Florida. Highs this afternoon will be in the middle 70s. It will be breezy and colder tonight and Monday. Lows tonight will be in the 40s, and Monday’s highs will struggle to get out of the lower 50s. Tuesday and Wednesday will be in the 50s by day and 30s by night. 60s will return by Thursday. Rain and storms will return Friday, with highs approaching 70F. Things will cool down slightly by the weekend. There will be fairly large waves and high-risk currents through tonight. Water temperatures are near 60F.

ADVERTISE WITH US: Deliver your message to a highly engaged audience by advertising on the AlabamaWX.com website. The site enjoyed 20 MILLION page views in the past 12 months. Don’t miss out! We can customize a creative, flexible, and affordable package that will suit your organization’s needs. Contact me, Bill Murray, at (205) 687-0782, and let’s talk.

WEATHERBRAINS: This week, the panel will entertain Dr. Louis Uccellini, the head of the National Weather Service. It promises to be an interesting show!. Check out the show at www.WeatherBrains.com. You can also subscribe on iTunes. You can watch the show live at live.bigbrainsmedia.com or on James’ YouTube Channel You will be able to see the show on the James Spann 24×7 weather channel on cable or directly over the air on the dot 2 feed.

ON THIS DATE IN 1992: Hundreds of people were buried and killed in the worst avalanches in recent times in eastern Turkey. The village of Gomec, Turkey was one of the hardest hit when over half of its population was killed along with 132 Turkish soldiers in an avalanche that buried the town. Follow my weather history tweets on Twitter. I am @wxhistorian at Twitter.com.