Skip to content
The heat of the past few days will recede a bit over the next week. It will start to return by the Fourth however, which is where this forecast is heading.

SATURDAY RECAP: It was another day of oppressive heat across Central Alabama. The mercury managed to reach 100F at Tuscaloosa. It was 101F at Demopolis. Birmingham hit 97F. Anniston only reached 90F. A few strong storms developed during the afternoon. There were a couple of severe thunderstorm warnings, but nothing significant. 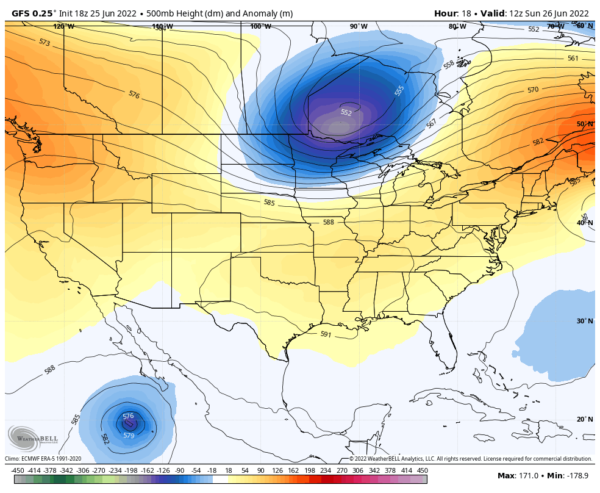 ON THE WEATHER MAPS: Upper-level high pressure remains in control across much of the United States. But our weather maker is an upper low sliding through the Great Lakes. This upper low will push a cold front toward the state today. This front will trigger showers and storms to our northwest that will edge into the state later today and tonight. The storms will be on a weakening trend through the overnight hours, but will re-energize Monday afternoon. The front will stall near the Gulf Coast on Tuesday. Showers and storms will remain a part of the forecast through Thursday in areas mainly along and south of I-20. Northern areas may be drier through midweek. That will change as the front comes back north by Thursday.

WEEKEND OUTLOOK: Another front will settle down into the area by Sunday, increasing rain and storm chances again. This should set the stage for a dry and warm Fourth of July.

BEACHCAST: Showers and thunderstorms will be a part of the daily routine along the beautiful beaches of Alabama and Northwest Florida. Highs will be in the upper 80s, lows in the middle 70s. Water temperatures are in the upper 80s. We will be watching the rip current threat during the week, with the potential for a tropical depression forming over the norther Gulf. Don’t worry, it won’t cause any other issues along the beeches as it heads toward southeastern Texas.

TROPICS: We are tracking two areas of interest in the tropical Atlantic. First, a tropical wave about 1,400 miles east of the southern Windward Islands has shown some promise and some of the global models are picking up on that idea. The general idea is that the potential storm would enter the southeastern Caribbean around midweek. The consensus is that the storm will move west-northwestward across the southern Caribbean. Some of the intensity guidance suggests it may be a category two hurricane, but a track just above the South American continent would keep it from developing significantly I think. The NHC Is monitoring this old frontal system that will move through our area tonight. Once it gets into the northern Gulf, it will become a good candidate for a tropical depression to form. And if it does, it will move toward the northwester Gulf and Texas.

DANCING WITH THE STATS: 3.54 inches of rain fell in one hour at the Tallahassee Airport yesterday, the third-highest hourly total there.

WEATHERBRAINS: This week, the panel will entertain Mark Sudduth of HurricaneTrack.com. Check out the show at www.WeatherBrains.com. You can also subscribe on iTunes. You can watch the show live at live.bigbrainsmedia.com or on the new WeatherBrains YouTube Channel You will be able to see the show on the James Spann 24×7 weather channel on cable or directly over the air on the dot 2 feed.

ON THIS DATE IN 1954: a killer 8-10 foot wall of water called a seiche (pronounced saysh) swept eight unsuspecting fishermen off the Montrose Harbor pier to their deaths. The seiche was caused by an outflow of cold air rushing out of a fast-moving line of thunderstorms speeding southeast across southern Lake Michigan in excess of 60 m.p.h. The cold outflow caused a rapid rise in air pressure that pushed a slowly-building bulge of water toward the southeast shore of the lake. As a result, water levels dropped on the Chicago shore and rose on the Michigan/Indiana side. The surge then moved back to the Chicago shore as a large wave, taking nearly 90 minutes to make the return trip. Follow my weather history tweets on Twitter. I am @wxhistorian at Twitter.com.