IT’S FOGGY OUT THERE! Fog is limiting visibility to less than ¼ mile in many spots across North and Central Alabama this morning. Be careful if you have to drive early this morning. The fog should begin to lift by 9 a.m.

IMPROVED SUNDAY WEATHER: After a cloudy, rainy Saturday, today will feature some improved weather after the fog burns off. Expect some sunshine later this morning before clouds beginning to thicken this afternoon. Readings will range from the upper 50s North to middle 60s in the I-20 Corridor to the upper 60s across southeastern portions of the area. Moisture will begin surging into the area again late today and tonight and showers will arrive across West Alabama by late in the day. A low-pressure system will track from southwest to northeast across the state tonight and rain will overspread the area again. Drier air will wrap in behind the low as it passes overnight, leading to clearing skies. The low will spin up some gusty winds the evening and overnight into early Monday, so fog won’t be a problem. Lows by morning will range from 35-45 degrees from northwest to southeast.

MONDAY AND TUESDAY The start of the new work week will be dry as high pressure builds across the state and region. Lows Monday night will be below freezing northwest of I-59 with lower and middle 30s elsewhere. Highs on Monday will be chilly, with upper 40ss Northwest and lower and middle 50s elsewhere. Tuesday highs will run about 5 degrees warmer.

RAIN RETURNS TUESDAY NIGHT: Our next weather maker will be another strong trough that will be closing off across the Plains States. A cold rain will overspread the area Tuesday night into Wednesday morning. Most of the rain will be gone by Wednesday afternoon.

SIGNIFICANT WINTER STORM: This system will go on to become a significant winter storm for the Mid-Atlantic and Northeastern United States. Widespread heavy snows will fall in the area from West Virginia across Pennsylvania into the Northeast Corridor between NYC and Boston. There could be some 2-foot amounts before this one is done across parts of the Mountaineer and Keystone States. 5-10 inches could call between NYC and Boston.

INTO THE WEEKEND: Thursday, Friday, and most of Saturday will be dry before our next weather maker brings showers back for Saturday evening. This precipitation should be gone by Sunday afternoon. Seasonally cool temperatures will continue, with highs in the 40s Thursday, and 50ss Friday and Saturday.

LOOK AT CHRISTMAS: The 23rd will feature snows across the Four Corners region of the Southwest, as well as over the Northwest and the Great Lakes. Rain will develop over the Arklatex that day and spread into Alabama by late in the afternoon. The frontal system responsible for the rain will stall across the area on Christmas Eve, keeping most of that day wet, with lingering rains even as Santa makes his run. Temperatures should be relatively mild, in the 50s for highs, with 40s and 50s for lows.

VOODOO COUNTRY: Another wet weather system will come to Alabama for the 27th and 28th. 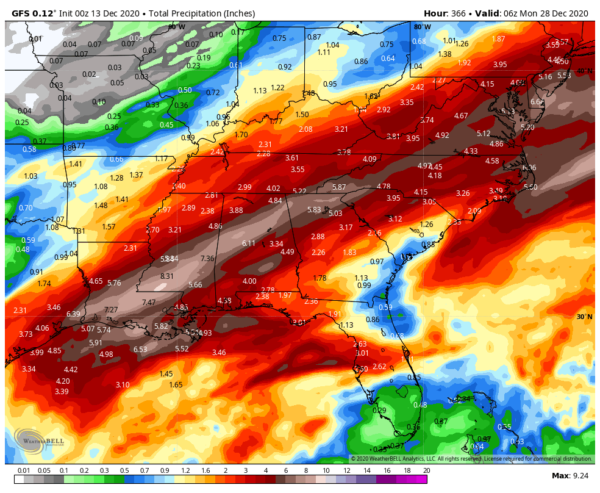 RAINFALL AMOUNTS: Over the next two weeks, it appears that much of North and Central Alabama will pick up 3-7 inches of rain, with the heaviest amounts in the I-29 Corridor.

BEACHCAST: A few showers until Monday afternoon and then dry until late Tuesday. Rain will be likely until Wednesday evening. It will then be dry through the weekend. The week will be mild, with highs in the 60s. Lows will be in the 30s and 40s. There will be a high rip current risk through tonight. Water temperatures are in the upper 50s.

WEATHERBRAINS: Last week’s show featured an interview with Sean Potter, who has a book out about Cleveland Abbe, America’s First Weather Forecaster. Check out the show at www.WeatherBrains.com. You can also subscribe on iTunes. You can watch the show live at live.bigbrainsmedia.com or on James’ YouTube Channel You will be able to see the show on the James Spann 24×7 weather channel on cable or directly over the air on the dot 2 feed.

ON THIS DATE IN 1977: Twenty-nine people including fourteen University of Evansville basketball players and coach Bobby Watson were killed when their plane crashed shortly after takeoff in dense fog from the Evanville, Indiana Airport. Follow my weather history tweets on Twitter. I am @wxhistorian at Twitter.com.