Much of Central Alabama got a decent soaker Saturday morning as the cold front moving into the state got a bit of oomph from low pressure moving along the front. Thee front made a lot more progress into the state that expected and the slow-moving low and front lies over East Alabama this morning. It is responsible for the lingering clouds that we are experiencing this morning. 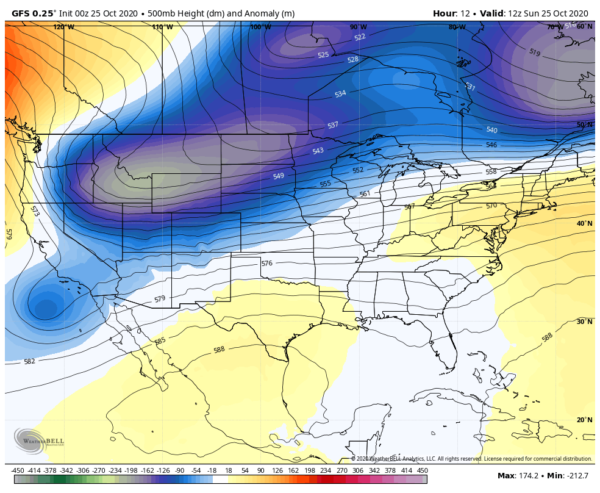 ON THE WEATHER MAPS: In the upper atmosphere, we see a deepening trough over the western United States, with a stubborn ridge of high pressure over the eastern third of the country. At the surface, that weak surface low is near Anniston, with a trailing front through the Wiregrass. High pressure over the Mid-Atlantic is waiting to assert itself. More about that in a minute.

HERE’S THE LATEST ON TD 28: Our tropical depression is located over the western Caribbean, about 250 miles south of Cuba. It is moving slowly to the northwest. It is over very warm, high oceanic heat content water. Wind shear is low over the western Caribbean. So strengthening should occur and it will likely become a tropical storm early this afternoon. It will be a strong tropical storm by the time it reaches the southern Gulf of Mexico late Monday night. It will go on to become a hurricane for a while Tuesday before increasing wind shear and decreasing water temperatures begin to take their toll. By Wednesday afternoon, it should be a strong tropical storm, just south of the Southeast Louisiana coast. It should make landfall somewhere between Grand Isle and the Mouth of the Mississippi River evening with a likely second landfall near the Alabama/Mississippi border around 10 p.m. Turning northeast and accelerating, the center will likely be into Central Alabama just by 4 a.m. and be out of the state just after noon Thursday.

THE UNCERTAINTY: The models seem to have a good handle on this system, but the error cone shows us that the center could still cone inland across a wide swath of the Gulf Coast from Cameron, LA to Panama City, Florida. I would think though that any shift in the track will probably be to the east, along the Alabama and Florida Panhandle coast.

GULF COAST IMPACTS: Rain will arrive along the Gulf Coast Tuesday afternoon from southeast Louisiana to Northwest Florida. Heavier ran will begin arriving Wednesday morning along the coast from Southeast Louisiana to Panama City. The heaviest rain will arrive on the coasts of Alabama, Mississippi, and Southeast Louisiana Wednesday afternoon. Winds will become gusty by Wednesday morning from SE Louisiana to Northwest Florida, and inland over Mississippi and Alabama. Tropical storm force winds will reach the coast near and east of the center, likely between Morgan City and Biloxi late Wednesday afternoon. Winds will reach 25-35 mph with gusts to 50 mph over Southeast Louisiana, including New Orleans Wednesday evening. Winds of 25-30 mph with gusts to 45 mph will spread well inland over southeastern Mississippi up into Alabama Wednesday night and early Thursday morning. Waves will begin increasing by Tuesday afternoon across the Alabama and western Florida Panhandle coasts, reaching 10-13 feet on Wednesday. The rip current risk will be through the roof along the beautiful beaches of Alabama and Northwest Florida. Tornadoes will be a possibility, but it is too early to tell how significant this threat will be. We will get to inland impacts as part of the forecast.

FOR YOUR SUNDAY: Today will be a mostly cloudy day across the area with the low tracking away slowly to the northeast. There will also be a little patchy fog early this morning. There could be a tiny peek of sunshine late in the day in spots. Highs will be in the lower and middle 70s. Lows tonight will be in the upper 50s with some more patchy fog and clouds.

SUNSHINE RETURNS FOR MONDAY: Tomorrow will be a nice day with a good supply of sunshine. High temperatures will make it into the middle and upper 70s.

TUESDAY WILL BE DRY: But cloudiness could be on the increase again as moisture starts to spread over the state from what will be Tropical Storm Zeta. Highs will still reach the upper 70s to the lower 80s with partial sunshine. Rainfall will reach South Alabama Tuesday evening and showers will start moving into Central Alabama

WEDNESDAY: We will be tracking Zeta as it approaches landfall. Skies will again become cloudy and rain will overspread the state. Highs will be in the lower and middle 70s. It will become breezy with southeasterly wind averaging 10-16 mph with gusts to 20 mph. Rain will become heavy at times Wednesday night into early Thursday across Central Alabama with winds increasing to 25-30 mph near the approaching center of the weakening tropical storm with gusts to 40-45 mph

THURSDAY: The tropical storm will quickly to a tropical depression as it moves through Alabama Wednesday night. It will be moving through Northeast Alabama Thursday morning and should be out of the state by noon. Rain should end quickly after the center passes and winds will die down soon after as well.

WEEKEND OUTLOOK: Cooler and drier air will move into the state as high pressure retakes control. Highs will return to more normal levels for late October and early November, with highs in the upper 60s. Lows will be in the upper 40s.

REST OF THE TROPICS: Epsilon is racing out to the northeast this morning and will become post-tropical tonight.

AND IT’S NOT OVER YET: Another tropical system will form in the Caribbean the first week of November. It will likely become a hurricane. It will most likely cross Cuba and the Bahamas.

GULF COAST WEATHER: Nice weather through Monday, but things will deteriorate Tuesday and be rough on Wednesday. Thursday will feature improving conditions with nice weather into the weekend. Weekend highs will be in the 70s, with low in the 50s. The rip current risk will be very high starting Tuesday and continuing through Thursday. Water temperatures are in the lower 70s.

WEATHERBRAINS: The crew gets back to work this week with a great show coming up Monday night talking about lightning with Guest WeatherBrains Chris Vagasky and Ron Holle. Check out the show at www.WeatherBrains.com. You can also subscribe on iTunes. You can watch the show live at:
http://live.bigbrainsmedia.com/. You will be able to see the show on the James Spann 24×7 weather channel on cable or directly over the air on the dot 2 feed.

ON THIS DATE IN 1997: A major snowstorm pounded Colorado, Kansas, and Nebraska. 51 inches of snow fell at Coal Creek CO. Four feet of snow fell over a wide area. Stapleton Airport picked up 21.9 inches of snow. 19.3 inches of snow fell at Goodland KS to establish a new 24-hour snowfall record for that location. The Denver Broncos nearly missed their flight to of all places – Buffalo, because of a huge storm that had dumped nearly 22 inches of snow on the Mile High City. Known for its snow, Buffalo was actually sunny and mild as the Broncos struggled to get to the airport. Follow my weather history tweets on Twitter. I am @wxhistorian at Twitter.com.