High-temperature records have been falling to the west of Alabama for the better part of a week, but we have stayed just out of the reach of the most extreme heat. Things will be heating up during the week ahead, with quite a few 90s in-store, but can we elude the record books? Let’s see…

ISOLATED SHOWERS ON SATURDAY: A little more clouds helped hold temperatures in check a bit, but readings were still around 5 degrees above normal for mid-May. Central Alabama readings included 85F at Anniston, 87F at Birmingham, and 88F at Tuscaloosa. Even though the showers were widely spaced, a couple did find their way over a rain bucket, including one that dropped 0.06 inches at the Birmingham Shuttlesworth International Airport, and 0.15 inches at my house off Acton Road. But the big winner was Tuscaloosa, where 1.44 inches fell Friday evening, most of it in 30 minutes.

FOR YOUR SUNDAY: We’re starting off with a little patchy fog in spots this morning. Temperatures are in the 60s. We are under a northwesterly flow aloft, which can sometimes send thunderstorm complexes hurtling our way from the Midwest, especially in May. One such complex s bubbling over Iowa this morning. That complex will run out of steam before it gets to Alabama. The only thing you can expect today other than partly cloudy skies and hot temperatures in the upper 80s is a few widely scattered showers like yesterday. One or two of them could grow into thunderboomers.

MONDAY STORMS: At least after one little trough and one little cold front rolls through early tomorrow. A few showers and storms may accompany the front as it pushes through Central Alabama. The storms could be strong to severe over eastern and southeastern sections of the state tomorrow. Damaging winds will be the threat.
NICE DAY TUESDAY: Tuesday should be a mostly sunny day with warm highs in the upper 80s.

THEN MERCURY RISING: 90s will become commonplace around Alabama by Wednesday, continuing until the next trough comes along, which should be late Friday into Saturday. You know what that means, more in the way of showers and storms in time for the weekend. The highest rain chances will be on Sunday. Temperatures will fall back into the 80s for highs for the weekend and the first part of the following week. But 90s won’t be far behind. 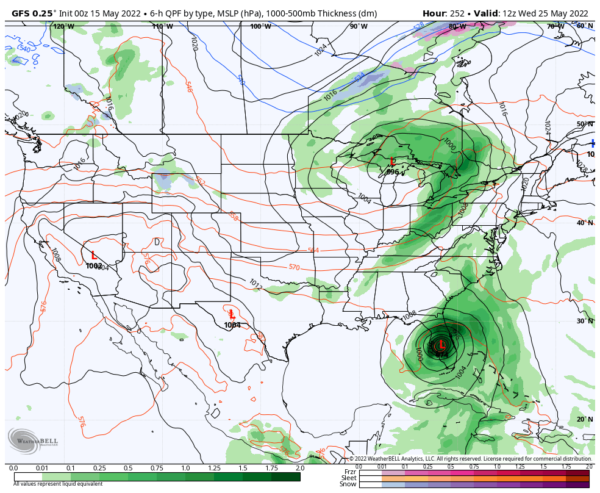 TROPICAL TROUBLE: The GFS model is known for spinning up spurious tropical systems in the western Caribbean and Gulf of Mexico in May. But every once in a while, one of them happens. Think Tropical Storm Barry in 2019. Anyway, the model has been very consistent in bringing a strong tropical storm out of the Caribbean and into the Gulf of Mexico. Conventional wisdom and most of the modeling say it will go toward Central Florida if it develops at all, perhaps as a strong tropical storm. But recent runs have had it all over the map from New Orleans to the Big Bend of Florida, to Key West. Stay tuned!

BEACHCAST: Scattered thunderstorms today and tomorrow along the beautiful beaches of Alabama and Northwest Florida, but they will be hard to find the remainder of the week. It will be hot this week, with highs in the 90s and lows in the middle 70s. You will think it is July at the beach! Water temperatures are still refreshing through, in the upper 70s. That is too warm for May though, which could spell trouble down the road.

DANCING WITH THE STATS: Texas has been cashing in on the high temperatures records, but parts of New England did on Saturday as well. 83F at Caribou ME beat their old record for the date by 2 degrees.

LUNAR ECLIPSE TONIGHT: A total lunar eclipse will occur tonight and it will be visible in eastern North America, including Alabama. Unlike a solar eclipse, no special viewing precautions are necessary. During totality between 10:29 and 11:54 p.m., the moon turns a dark orange or red, which is often referred to as a “blood moon.” As sunlight passes through our atmosphere, the green, blue and violet portion of the light spectrum is filtered out while yellow, orange and especially red bend around the earth and onto the moon’s surface giving it the reddish color. Lunar eclipses only occur during a full moon. The May full moon is known as the Flower Moon simply because it’s the time of the year when wildflowers are in full bloom.

WEATHERBRAINS: This week, the panel will entertain the long-time editor of the Monthly Weather Review. That venerable publication turns 150 this year and we’re in a mood to celebrate! Check out the show at www.WeatherBrains.com. You can also subscribe on iTunes. You can watch the show live at live.bigbrainsmedia.com or on James’ YouTube Channel You will be able to see the show on the James Spann 24×7 weather channel on cable or directly over the air on the dot 2 feed.

ON THIS DATE IN 1968: Iowa’s most destructive tornado in the 20th century struck Charles City during the late afternoon, killing 13 people and causing $30 million in damage. Follow my weather history tweets on Twitter. I am @wxhistorian at Twitter.com.