It was a Jekyll & Hyde kind of day across North and Central Alabama yesterday. Heavy rain and thunderstorms ruled the morning, but fortunately, these parts of the state did not see significant severe weather. There was some wind damage and a few tornado warnings across South Alabama. Behind the morning storms, skies cleared fairly rapidly and temperatures warmed nicely. The warming low-level atmosphere combined with cold temperatures aloft to produce moderate instability and storms formed again by mid-afternoon ahead of the cold front. There were some impressive reports of hail, including baseball-sized hail in Clarke and Monroe Counties between 3-4 p.m. There were also several reports of wind damage from the fast-moving storms, including a tree on a home in Mountain Brook, and trees reported down near Lincoln and Cropwell, east of Birmingham. Skies cleared even more quickly behind the afternoon storms. 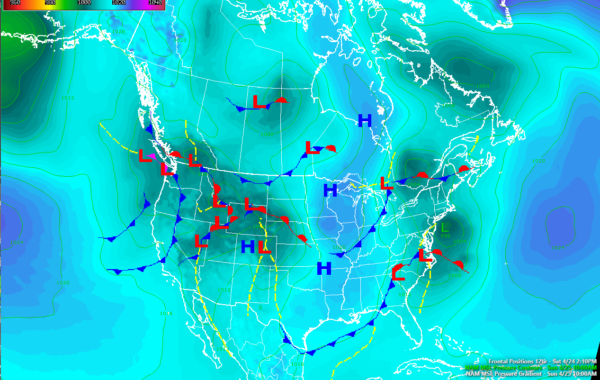 ON THE WEATHER MAPS: The upper-level trough that caused yesterday’s rain and storms is east of Alabama this morning, leaving us in a northwesterly flow. The cold front is approaching the Mouse’s House in Central Florida this morning. It was windy overnight, with a wind advisory in effect for much of Central Alabama through early this morning. Skies are partly cloudy this morning, with temperature readings in the upper 40s and lower 50s. The Alabama sky will feature plenty of stratocumulus clouds, but they won’t overcome a strong Spring sun and afternoon readings will rise into the lower and middle 70s. Tonight will be a coolish night with lows in the middle and upper 40s under clear skies.

THE WEEK AHEAD: The average highs for the last week of April range between 77 and 78 degrees in Birmingham. The highs for this week will be five degrees or so above normal, at least through Thursday. High pressure will be in control of Alabama’s weather and will hold a frontal system at bay by midweek. Skies each day will be partly cloudy and highs will range between 80 and 85 degrees. Lows will be in the 50s and lower 60s.

WEEKEND OUTLOOK: Picking up where we left off on Thursday, a frontal system that has been knocking on the door of Alabama will finally push into the state late on Thursday. Showers and storms will push into the state Thursday afternoon and evening. Like recent events, instability will be better over southern sections. For the time being, it appears any severe weather threat will be over southern Mississippi and Alabama. A few showers will linger into Friday. Temperatures will fall back into the 70s for Friday and the weekend.

VOODOO TERRITORY: Another storm system will impact Alabama on Thursday the 6th and Friday the 7th. This system also looks similar in severe weather potential to the last couple of systems.

BEACHCAST: Great week to be at the beach this coming week with plenty of warm temperatures to go around. Highs will be in the 70s and 80s throughout the week ahead. Rain will not retain to the beautiful beaches of Alabama and Northwest Florida until late Thursday into the weekend. Rip currents will be a problem today though. Water temperatures are in the middle 60s.

DANCING WITH THE STATS: 2.88 inches of rain fell yesterday at Mobile, establishing a new record for the date. The old record has stood since 1937.

WEATHERBAND: The American Meteorological Society has created a club for all of us! The weather enthusiasts of the world! You will connect with weather enthusiasts and experts alike. Special Weather Band items will identify you with the community. You’ll get special discounts on WeatherWise magazine and other merchandise as well as a special newsletter! Join today! https://amsweatherband.org/index.cfm/weatherband/membership/

ADVERTISE WITH US: Deliver your message to a highly engaged audience by advertising on the AlabamaWX.com website. The site enjoyed over 27 MILLION page views in the past 12 months. Don’t miss out! We can customize a creative, flexible, and affordable package that will suit your organization’s needs. Contact me, Bill Murray, at (205) 687-0782, and let’s talk.

WEATHERBRAINS: This week, the panel will remember the horrible tornado outbreak of April 27, 2011, in Alabama and Mississippi. Check out the show at www.WeatherBrains.com. You can also subscribe on iTunes. You can watch the show live at live.bigbrainsmedia.com or on James’ YouTube Channel You will be able to see the show on the James Spann 24×7 weather channel on cable or directly over the air on the dot 2 feed.

ON THIS DATE IN 1910: Birmingham experienced its latest snowfall on record along with crop-killing cold. Read more about it in a story on the AlabamaWX.com blog. Follow my weather history tweets on Twitter. I am @wxhistorian at Twitter.com.