Saturday was a nice day across Central and North Alabama, a nice start to the Memorial Day weekend. Highs in the middle 80s and lower than normal humidity made for a comfortable day. Today will be similar, but humidities levels are rising, and it will feel humid by afternoon. Highs will be in the upper 80s. After lows this morning in the upper 50s to lower 60s, lows tonight will be in the 60s.

FOR YOUR MEMORIAL DAY: That humidity will be solidly in place tomorrow for your holiday. High temperatures will rise into the upper 80s. We can’t rule out an isolated shower or storm, but the chances will be small. Highs will once again be in the upper 80s.

REST OF THE WEEK: High pressure will continue to ridge across the Southeast through midweek. It will be warm to hot, with highs in the upper 80s to the lower 90s. A few scattered storms will return by late Thursday or Friday. We will be watching a front trying to sag in from the north, which could increase those rain chances a bit.

WEEKEND SNEAK PEEK: High pressure will ridge back in over the weekend as the front stalls out and washes out. It will be dry and warm. 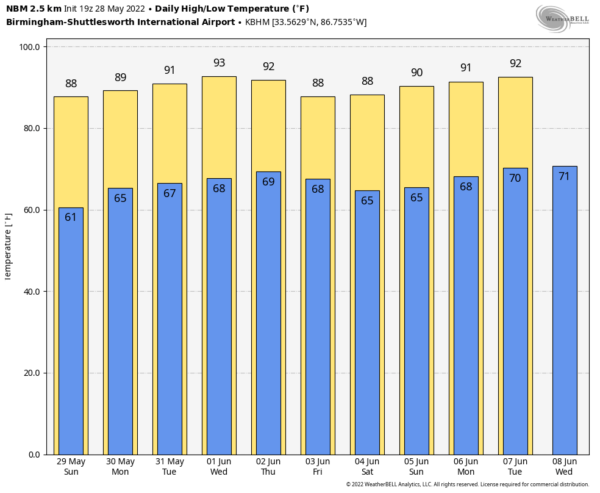 EYE ON THE TROPICS: The disturbance in the eastern Pacific became Tropical Storm Agatha on Saturday. The system will become a hurricane today. It could eventually become a 100 mph hurricane before it makes landfall along the southern coast of Mexico Monday evening. It will be moving north-northeastward, crossing a thin land bridge over southern Mexico, and if the system or its remnants hold together during the crossing of the mountainous terrain.

COULD AGATHA BECOME ALEX? The remnants of Agatha or the vorticity associated with it could spin up a tropical depression or tropical storm over the southwestern Gulf, or perhaps the northwestern Caribbean. The global models seem to be in agreement that something will form, but will it affect Central Florida, or South Florida, the Florida Straits, and Cuba? In any case, it doesn’t seem that it will happen until Thursday or Friday.

BEACHCAST: It looks like isolated showers and storms will impact the beautiful beaches of Alabama and Northwest Florida each day this week. The rain chances along the coast could increase by Thursday, especially if there is a tropical storm or hurricane in the southern Gulf. While any storm that should develop will not bring wind or widespread rain to the beaches, it could cause some rough surf. A low rip current risk should continue today and Monday but will become moderate by Tuesday and the rest of the week. Water temperatures are in the upper 70s.

NATIONALLY: Severe weather is possible today across the northern Plains into the Upper Midwest. The best chance for damaging winds and large hail will extend from Minnesota through eastern South Dakota and into Nebraska.

DANCING WITH THE STATS: A trace of snow was recorded at Newark NJ yesterday. But t wasn’t cold. How can that be? It was hail, which goes into the record books as snow.

WEATHERBRAINS: This week, the panel will entertain Bob Henson, who will be talking about famous TV meteorologists. . Check out the show at www.WeatherBrains.com. You can also subscribe on iTunes. You can watch the show live at live.bigbrainsmedia.com or on James’ YouTube Channel You will be able to see the show on the James Spann 24×7 weather channel on cable or directly over the air on the dot 2 feed.

ON THIS DATE IN 2004: Harper County, Kansas was not the place to be during the 2004 tornado season. On May 12, a huge, slow moving supercell thunderstorm produced at least ten tornadoes across the county. The strongest was an F4 twister near the town of Harper. Dramatic video was captured of a tornado lifting a house near the town of Attica and disintegrating it in midair. The residents of the house were fortunately in their basement and were not injured seriously. Then just seventeen days later, another supercell storm produced as many as nine additional tornadoes across the county. Fortunately, no fatalities were reported during either set of tornadoes. Follow my weather history tweets on Twitter. I am @wxhistorian at Twitter.com.