The two components of our Sunday weather maker are sort of splitting to our north and south today, leaving much of Central Alabama dry. North Alabama got some light rain overnight, and South Alabama did as well, but the central part of the state was left mainly high and dry. There are a few showers out there this morning, but today may end up mostly dry. Highs this afternoon will top out in the lower 50s over North Alabama, with middle 50s across Central Alabama, and upper 50s to the south. There will be some clearing toward sunset, with partly cloudy skies overnight and lows in the 30s.

MIDWEEK TRANSITION: A strengthening upper-level trough will be traversing the Plains on Wednesday, helping a cold front gather steam, and pulling moisture into Alabama from the Gulf. Clouds will increase by Wednesday afternoon and a few showers will move into the state Wednesday night. Rain will increase during the overnight hours as a surface low moves across the state. There shouldn’t be any thunder involved, as there just won’t be any instability to speak of. Temperatures will climb into the upper 50s Wednesday afternoon, falling back into the 40s during the evening before rising a bit after midnight. Then it will be a straight freefall through the morning and afternoon hours on Thursday. And That’s when it gets interesting.

JUST IN TIME FOR CHRISTMAS EVE: As those temperatures fall on Christmas Eve morning, precipitation may continue. And it may be cold enough for some wintry precipitation over parts of North and North Central Alabama. There is not a good consensus about where and what form that precipitation might take, but it would most likely be light snow. One solution has a wintry mix developing Thursday morning over the Northwest. Another has rain changing to snow during the day across the northern half of the state. That’s solution makes a good deal of sense, so we will be watching for that possibility. Temperatures will be falling through the 40s and into the 30s during the day. 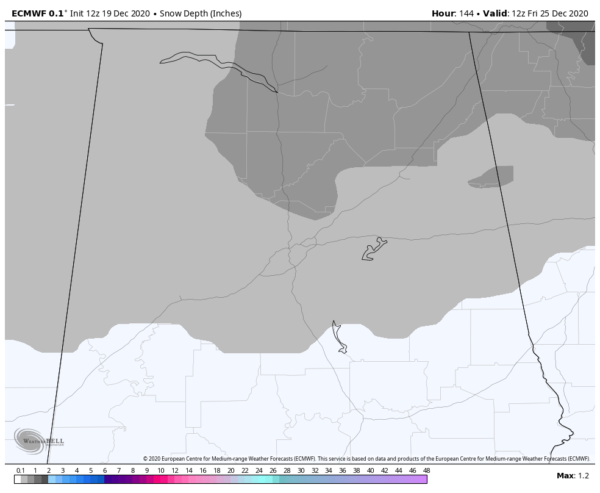 Snow forecast from the European Model for 6 a.m. Christmas morning

ACCUMULATION? If everything comes together perfectly, parts of North and North Central Alabama could see a dusting to one half inch of snow. While that is not a forecast at this point, it is a possibility, and something we will be watching.

WHITE CHRISTMAS: The official definition of a White Christmas would be one inch of snow on the ground at 7 a.m. on Christmas morning. For Birmingham, there has never been a White Christmas by the classic definition. There have been a couple of White Christmases in North Alabama, including one in 1963 where leftover snow from the 23rd and 24th was hanging on that morning in places like Huntsville and Muscle Shoals. There was another in 1929 across parts of North Alabama as an inch of snow remained on the ground from the snow that fell on the 22nd and 23rd. There was a widespread snow across North Alabama on Christmas Day in 2010, but it wasn’t a White Christmas by definition in North or Central Alabama. Could we have one in 2020? It will be fun to watch. After lows in the lower and middle 20s Christmas morning, Highs will be limited to the 30s over the northern half of the state.

THE WEEKEND: Saturday and Sunday will be dry and cool with highs in the 40s on Saturday and 40s and 50s on Sunday. Rain will return on Sunday night.

VOODOO TERRITORY: Rain will return for New Year’s Eve it appears. It should be gone by midday on New Year’s Day.

BEACHCAST: A few showers along the beautiful beaches of Alabama and Northwest Florida through this afternoon as low-pressure tracks into the Florida Panhandle. Rain returns late Wednesday into Christmas Eve. High s will be in the 60s until then, with 50s into the weekend. Lows will be in the 40s through Wednesday morning, with 50s Thursday morning, before falling back into the 30s into the weekend. Water temperatures are running in the middle 50s. Rip currents will not be a problem in the coming days.

NATIONALLY: A White Christmas is a pretty sure bet for much of the Intermountain West, as well as the Upper Midwest, including places like the Arrowhead of Minnesota, parts of Wisconsin, Illinois, and Michigan, as well as areas from Pennsylvania into New York from this week’s heavy snow. The wild card will be the snow across the South, including Alabama.

DANCING WITH THE STATS: The 12.3 inches of snow at Boston on Thursday was a record for the date.

WEATHERBRAINS: This week, the panel will entertain the world’s leading expert no tornadogenesis, Dr. Paul Markowski from Penn State University. Check out the show at www.WeatherBrains.com. You can also subscribe on iTunes. You can watch the show live at live.bigbrainsmedia.com or on James’ YouTube Channel You will be able to see the show on the James Spann 24×7 weather channel on cable or directly over the air on the dot 2 feed.