ANOTHER BEAUTIFUL DAY, BUT A QUICK TRANSITION: Saturday was a gorgeous day across Alabama with lots of bright blue skies. High temperatures across Central Alabama ranged from 60F at Alex City and Auburn to 68F at Demopolis. It was 61F at Anniston, 62F at Birmingham, and 67F at Tuscaloosa. Today will be even better, with temperatures running some 10-15 degrees higher than those of today. A balmy south wind will bring the warmer readings. Skies will be blue once again, with some clouds sonly showing up late in the day. Winds will be picking up this evening as the ridge of high pressure to our east strengthens. Winds will be picking up overnight, increasing the moisture import, and showers will break out overnight to our west. Those showers and some thunder will enter western sections of the state early on Monday morning. Lows tonight will be in the 50s for the most part, with some 40s over the southeastern parts of the area.

FOR YOUR MONDAY: The upper ridge will do its best to keep the showers and storms limited to areas north of I-20 through the day on Monday and into Tuesday. Clouds and precip on Monday will limit highs to the 70s, but with less rain on Tuesday, highs will approach 80 degrees. Lows will be in the 50s.

WEDNESDAY/THURSDAY STORMS: BY Midweek, a strong shortwave passing to our north will spin up low pressure to our west that will track northeastward. Showers and storms will increase during the day and into the overnight, and a line of strong storms will push into the state during the overnight. There is a chance that some of these storms will be strong to severe. The better chance will be to our west over parts of Arkansas, Louisiana and Mississippi, but the strength of the cold front may keep the storms strong overnight. It will become windy on Wednesday, with highs in the lower 80s. The rain and storms will end Thursday afternoon. Highs on Thursday will be in the 70s.

THE WEEKEND: The respite from the rain and storms will be short-lived though as another system approaches from the west. Rain and storms could re-enter Alabama as soon as Friday night with chances for rain and storms in the forecast through the weekend.

RAINFALL AMOUNTS FOR THE WEEK It looks like most areas will see around two inches of rain the coming 7-10 days.

THE FOLLOWING WEEK: It looks like we could have a week without rain in the following week. Warm temperatures as well.

BEACHCAST: It will be a mild week along the beautiful beaches of Alabama and Northwest Florida, with highs in the 70s and lower 80s, and lows mainly in the 60s. It will be dry through Wednesday, with rain and storms likely Thursday. Rain and storm chances will decreae but will conitune into the weekend.

WEATHERBRAINS: This week, the panel will talk about an important topic in the industry: sexual harassment. Check out the show at www.WeatherBrains.com. You can also subscribe on iTunes. You can watch the show live at live.bigbrainsmedia.com or on James’ YouTube Channel You will be able to see the show on the James Spann 24×7 weather channel on cable or directly over the air on the dot 2 feed. 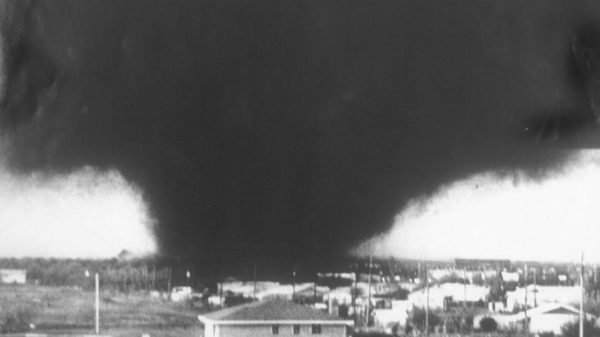 ON THIS DATE IN 1979: Three very intense thunderstorms produced a devastating outbreak of killer tornadoes and large hail in the Red River Valley of western north Texas and southern Oklahoma, including the Wichita Falls and Vernon areas. The three major tornadoes were all giants, each producing damage paths that were at least 35 miles wide. The worst was at Wichita Falls. The final tragic toll: 56 dead and 1916 injured. 40 of the fatalities occurred in Wichita Falls, in spite of excellent warnings. Follow my weather history tweets on Twitter. I am @wxhistorian at Twitter.com.