Showers and thunderstorms developed in the heat and humidity of an Alabama July afternoon yesterday as temperatures approached 90 degrees. A few spots got some decent rainfall. Flash flood warnings were required for parts of Talladega and Cherokee Counties. EMA did report some flooding. I picked up .33 inches of rain at my location in Vestavia, which added nicely to the 1.00 inch I recorded during a loud thunderstorm Friday evening.

RAINFALL FOR THE MONTH: The Birmingham Airport has recorded 6.24 inches of rain for the month so far, and we could add to that total today. The average rainfall for July at BHM is 5.42 inches. In fact, July is the second wettest month of the year in the city of Birmingham, behind March which averages 5.66”. Areas northwest of I-59 have received the least rainfall, which has led to increasing dryness and drought conditions.

SUNDAY CHANCES: The best chances for showers and storms today will be over the northern third of the state, in proximity to a stationary front just to our north. It looks like areas south of US-278 will be mainly dry today, but never underestimate the power of an Alabama summer atmosphere to gin up decent afternoon cloudbursts. Highs will be in the middle to upper 80s North, but will soar into the lower and middle 90s Central.

THE WEEK AHEAD: The week ahead should sport slightly higher than average rainfall chances, but no washouts by any means. Each day should feature a good supply of sunshine with scattered to numerous afternoon and evening showers and storms. Highs will be in the lower 90s each day. Lows will be in the lower 70s.

WEEKEND OUTLOOK: The GFS thinks that rain chances ramp down a bit by Friday into the weekend as the ridge strengthens a bit over the state.

BEACHCAST: Looks like fairly tranquil summertime conditions along the beautiful beaches of Alabama and Northwest Florida, with a good supply of hot sunshine each day. Just a small chance of an isolated storm. Highs will be in the upper 80s to near 90F. The water temperatures won’t be much cooler. Lows will be in the upper 70s. The rip current risk should be low.

NATIONALLY: More record heat over the Pacific Northwest today. The forecast high at Pasco WA is forecast to hit 110F today, which will be a record for the date if it happens. It will be 2 degrees short of their all-time July record and 5 degrees of their all-time high. These record highs will migrate eastward this week, moving into the northern Rockies tomorrow and northern Plains on Tuesday. By Wednesday, the focus of the heat will be over the Great Lakes, moving into the Northeast on Thursday and Friday.

DANCING WITH THE STATS: 108F at Burns OR yesterday was one of the more remarkable readings. 110F at Pendleton OR was nothing to sneeze at either.

TROPICS: Some signs that we might see the Atlantic Basin heating up by the middle of the month. Could this be a 130 mph Danielle out around the 15th heading toward Mexico? 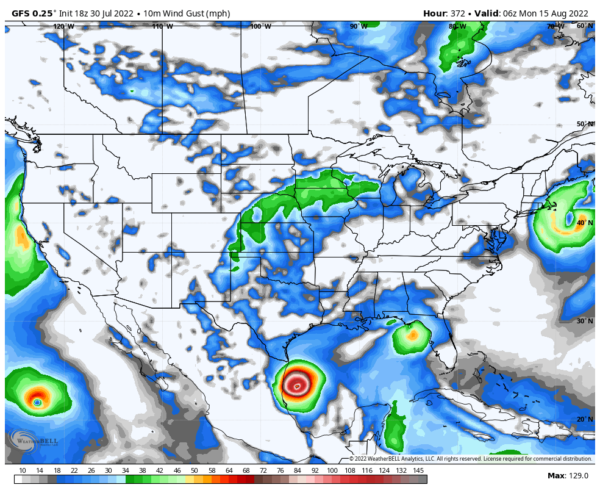 WEATHERBRAINS: This week’s show is already in the can, having been recorded Thursday night. We talked about rogue waves with writer Ally Hirschlag and debated whether there are too many severe thunderstorm warnings with meteorologist Matthew Cappucci. Check out the show at www.WeatherBrains.com. You can also subscribe on iTunes. You can watch the show live at live.bigbrainsmedia.com or on James’ YouTube Channel You will be able to see the show on the James Spann 24×7 weather channel on cable or directly over the air on the dot 2 feed.

ON THIS DATE IN 1976: This week’s flooding in Missouri and Kentucky was reminiscent of some of the more famous flash floods in American history. One of the worst of those occurred on this date in 1976. Up to 12 inches of rain was dumped in Big Thompson Canyon in Colorado as it was filled with revelers over the Centennial Celebration of Colorado Statehood. A 20 foot wall of water swept down the Canyon, killing 144 people. Follow my weather history tweets on Twitter. I am @wxhistorian at Twitter.com.