It is that one day of the year that has 25 hours, thanks to our falling back an hour overnight at the end of daylight saving time. Most of your devices will compensate for the time change, but if you have any manual clocks, they still need to be changed this morning unless you have already done it. It is also a good time to change the batteries in your smoke detectors, carbon monoxide detectors, and weather radios.

SATURDAY REWIND: The storms that caused all of the havoc Friday afternoon and evening to the west of Alabama weakened as they pushed eastward overnight. That was good news for us. In fact, the main cold front and its attendant drier air won’t even make it to Birmingham. That is because the big powerful trough driving the system abandoned the front and ran away to the northeast. Rainfall amounts were unfortunately light. Clouds hung tough overnight and a little patchy fog developed in spots and dewpoints remained high, in the 60s.

THE WEEK AHEAD: A big area of high pressure over the Great Lakes will take control of the weather over the eastern half of the nation, giving Alabama some fine weather and perhaps pushing a little tropical mischief toward the Southeast coast. More about that in a minute. Monday through Wednesday will be nearly perfect, with highs in the 80s Monday and Tuesday, and 70s on Wednesday. Lows will be in the 60s Monday night and 50s the rest of the work week. A cold front will arrive late Thursday or early Friday, and this one will live up to its name in the temperature department. It will be moisture-starved, however, and rain chances will be slim.

COOLER FOR THE WEEKEND: Much colder air will spread into Alabama and the Deep South in time for the weekend. Lows Friday night will drop into the 30s with widespread frost. Northern areas may see a freeze. Sunday morning lows will be close to freezing across the entire area. Highs will be in the 50s Saturday and Sunday.

COOL INTO THANKSGIVING WEEK: Looks like a decent low-pressure system and rainmaker will push through Alabama around Thursday the 17th. The rain is good news. It will be followed by a reinforcing shot of cold air that will carry us into Thanksgiving week on the cool and dry side. 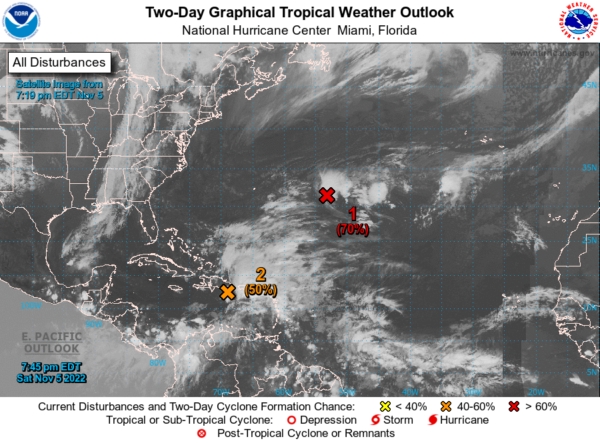 TALKING TROPICS: Martin lost tropical characters at midweek and the last advisory was written on Thursday. Lisa finally fell apart yesterday, but not before making me eat my words that it would not get into the Gulf of Mexico. Now, our attention will turn to the southeastern Atlantic, near the Bahamas, where a subtropical or tropical storm is likely to form this week. The developing high to the north that we have talked about will force the storm eastward. Where it ends up is up in the air, but there is a good chance it gets pushed back toward Florida. There is even a chance it might skirt the coast up past Georgia and South Carolina before turning out to sea. The Euro painted a picture that carries a weaker system into the Gulf of Mexico. In case any case, the upper trough approaching with the cold front will turn the storm to the northeast or absorb it. Our next named storm will be Nicole. Owen and Paula will be up next.

BEACHCAST: Another flawless week of weather along the beautiful beaches of Alabama and Northwest Florida. A little patchy fog this morning, but otherwise mostly sunny through much of the week ahead. 80s for highs today and Monday, falling back into the upper 70s through Friday. Cooler for the weekend behind the cold front, with the 60s for highs over the weekend. Lows will be in the upper 60s until next weekend when the 40s will become common. Water temperatures are in the lower 70s. Low rip current risk this week.

DANCING WITH THE STATS: 1.61 inches of rain at Memphis yesterday was good enough to be the best ever for the date. Not enough to raise the Mississippi a bunch perhaps, but they could use the rain too.

WEATHERBRAINS: This week, the panel will entertain Paul Iniguez from the NWS Phoenix who will be talking about a new heat scale that he was behind. There will be a couple of special guests as well including one with an unbelievable story from Hurricane Ian. Check out the show at www.WeatherBrains.com. You can also subscribe on iTunes. It’s now easier than ever to watch the show live at