It was a tale of two skies across North and Central Alabama on Saturday. Over the northwestern part of the area, clouds increased during the day and a few showers start moving across the area by late afternoon. Those showers increased as evening fell, with even a few rumbles of thunder thrown in.

FOR YOUR SUNDAY: We are starting off in the upper 40s and lower 50s across the area this morning with the band of showers and isolated thunder sinking steadily southward through the pre-dawn hours. The main band should be south of I-59 shortly after lunchtime. Scattered showers will continue across North Alabama until the cold front moves through during the afternoon. High temperatures will be in the middle and upper 50s over the northern half of the state, with lower 60s limited to the South Central part of Alabama. Winds will become gusty behind the cold front by later afternoon and into tonight. Temperatures overnight will fall into the 30s over the northern half of the state, ranging between 33-41 from Muscle Shoals to Montgomery. A few of the normally colder locations will reach freezing.

DRY START TO THE WEEK: The week will start with dry weather for Alabama, with sunny and cool conditions for Monday and partly cloudy weather for Tuesday. Highs Monday will be in the 50s, returning to near 60F on Tuesday as southerly winds kick back in. Lows Tuesday morning will be a couple of degrees colder than those of tomorrow morning.

MIDWEEK STORM SYSTEM: By Wednesday, low pressure will be developing east of the Rockies and this will set the stage for another round of showers and storms across the South. We could see a shower or two across the state Wednesday, but rain chances will be low. Highs will make into back into the middle 60s. By Thursday morning, the low will be in eastern Oklahoma, As the low moves into southern Missouri, a band of showers and storms will be moving across the Mid-South, across Arkansas, Louisiana, western Tennessee, and Mississippi. It appears that severe weather will be possible across areas to the west of Alabama during the day Thursday, and the storms will work their way into western Alabama during the night. They should be weakening as they come into the state, but strong storms are still possible. The rain will end from the northwest on Friday, but a few showers will develop as the big bowling ball of an upper low slowly traverses the Ohio Valley. Temperatures on Friday will barely rise above the overnight minimums and a cold northwest wind will make things even more uncomfortable. A few snow showers could flirt with northeast Alabama Friday night, but it shouldn’t be an issue. Friday night lows will be in the 30s.

THE WEEKEND: Saturday will feature clearing and colder weather. It will still be windy, with northwesterly winds gusting to 25-30 mph at times. Highs will struggle to get out of the 40s but should reach the lower 50s across at least the southern half of the area. Sunday should be slightly warmer in the afternoon after a chilly morning.

VOODOO TERRITORY: Our next storm system will come in around Tuesday the 17th. Another will quickly follow on the 19th. This is another system that could bring severe weather to the area. 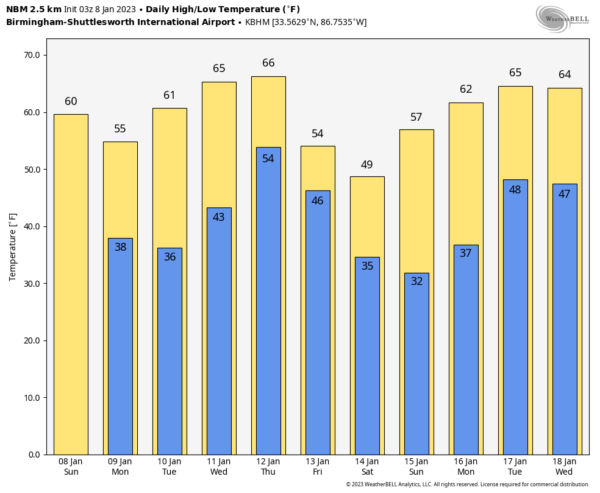 BEACHCAST: A slight chance of showers tonight along the beautiful beaches of Alabama and Northwest Florida, but that will be the last chance until the bigger storm system arrives on Thursday. Then, it appears severe weather might be in the cards for the coast, so we will be watching that. Highs all week will be in the 70s except for tomorrow when 60s will prevail behind the front, and over the weekend behind the second stronger front. Water temperatures are in the upper 50s. The rip current risk looks to be low into the early part of the week.

NATIONALLY: Additional waves of moisture are going to be impacting California over the next few days and while the precipitation they will bring is welcome, the impacts are not. More flooding is expected in California’s Central Valley, where heavy rains from a system that will move out today but be followed by another system tonight through Tuesday. Some areas could pick up 6 inches of rain. A winter storm warning is in effect through Wednesday morning for the Sierras, where up to 30 inches is expected. Area ridgetops could see winds of 100-130 mph!!

DANCING WITH THE STATS: The NWS in Birmingham has now identified 13 tornado tracks from the severe weather event on Jan. 3-4. The total now stands at 7 EF-0, 5 EF-1, and 1 EF-2. Damage at Smith Lake in Walker County is still being reviewed to determine whether it was due to a tornado or thunderstorm winds.

ADVERTISE WITH US: We have some prime availabilities for the coming year and can put an affordable package together for your business or organization. Contact me, Bill Murray, at (205) 687-0782, and let’s talk.

WEATHERBRAINS: This week, the panel interviewed Elyse Smith and Carl Lam from Buffalo, two TV mets who went through their Christmas Blizzard there. A social scientist from the University of Buffalo joined them to help untangle the factors that led to the event being so deadly. Check out the show at www.WeatherBrains.com. You can also subscribe on iTunes. You can watch the show live at live.bigbrainsmedia.com or on James’ YouTube Channel You will be able to see the show on the James Spann 24×7 weather channel on cable or directly over the air on the dot 2 feed.

ON THIS DATE IN 2014: Alabama was in the deep freeze as the nation shivered under the effects of the media described “Polar Vortex”. Single digits were common across the Tennessee Valley. Lows across the state on this frigid morning included 4F at Huntsville, 5F at Decatur, 7F at Birmingham, 8F in Anniston, and 10F in Tuscaloosa. It was 2F at the Bankhead National Forest station. The coldest value observed was -3F at Harvest. The Birmingham low smashed the previous record of 11F. Mobile also set a record for the date. It was just a cold month overall. And we all know what followed on January 28th. Follow my weather history tweets on Twitter. I am @wxhistorian at Twitter.com.