Freeze warnings continue this morning across the parts of Central Alabama where there has not already been a season-ending freeze. Morning lows will end up in the middle 20s across North Alabama, upper 20s to near 30F across Central Alabama, with middle 30s over the South. Even the beautiful beaches of Alabama and Northwest Florida are chilly, with morning lows in the middle 30s.

RUDE AWAKENING: After readings in the 80s Tuesday, Wednesday, and Thursday, today was a rude awakening. The cold front pushed through the northwestern third of the state during the morning hours, dropping temperatures quickly into the 40s where they hovered all day. By late afternoon, 30s were common over the northwestern corner of the state. Today’s readings won’t get out of the 40s over the northern half of Alabama, with lower 50s over South Central Alabama. Skies should be mostly sunny today. It will be windy at times today, especially this morning. Tonight will be a degree or two warmer than last night, with lows in the upper 20s to lower 30s across North and Central Alabama. Colder north of course.

TO THE WEATHER MAPS: The upper air charts across North America this morning reveal that low pressure covers much of the continent, with distinct troughs over the Desert Southwest and over the eastern Great Lakes. The eastern trough will quickly exit the Northeast by tomorrow, with the western trough moving into the Lone Star state of Texas where it will take on a negative tilt showing it has a little oomph to it. It will manage to pull a good bit of moisture up into the Deep South. Some instability will edge up into coastal sections along the Gulf Coast, and severe weather will be possible along the coasts of Texas and Louisiana, but just thunder along the Mississippi, Alabama, and Northwest Florida coasts.

HERE IN OUR PART OF ALABAMA: Clouds gradually return to the area on Monday as that low-pressure trough to the west gets its act together. It could be breezy at times, and even windy, especially over North Alabama where we might see some gusts to 40 mph Monday afternoon and evening. Rain arrives in western Alabama Monday night and takes its time, giving much of us a few hours of rain into Tuesday, which is great news, considering the amount of dryness we have experienced recently. The Drought Monitor shows plenty of abnormal dryness and even some level 1 and 2 drought conditions across the state. Still, rainfall amounts don’t look too generous, with most areas picking up less than one-half inch. Lows Tuesday morning will be in the 40s, and daytime highs in the 50s. Easterly winds will be breezy on Tuesday as well, averaging 6-16 mph and gusting to over 20 mph at times.

COLD AIR SNOW: In the cold air back over Oklahoma and Arkansas, snow will be likely Monday night into early Tuesday, and there could be some significant amounts. The Sooner State could see 4-8 inches with 1-3 into western and northwestern Arkansas.

MIDWEEK AND BEYOND: Midweek into the weekend looks fairly uneventful with dry conditions and cool temperatures. A Gulf system may bring rain to the beaches Thursday night into Friday, but North and Central Alabama should be dry. 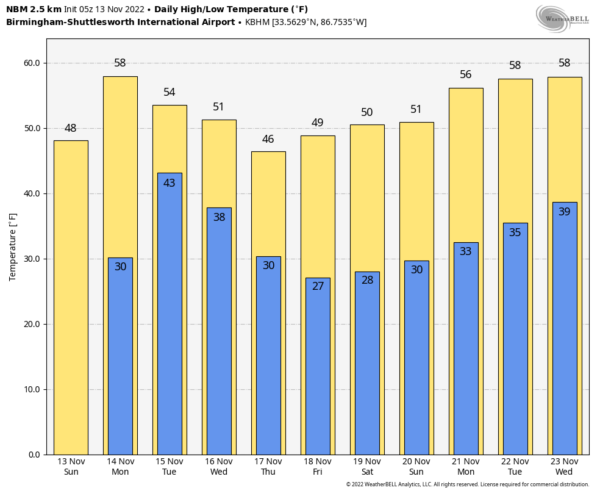 VOODOO COUNTRY: It looks like the extended forecast period in days 8-14 may be dry and cool, with a warm-up coming back just in time for the Iron Bowl. The big game should be dry, but the rain will return on Sunday or Monday.

BEACHCAST: The weather word along the beautiful beaches of Alabama and Northwest Florida is cool. Highs will be in the 50s and 60s except on Tuesday when that stronger system will bring some 70s in. Lows will be in the 40s and 50s. Rain and some storms will be likely Monday night into part of the day Tuesday. The water temperature is 70F. There may be a little higher rip current risk by Tuesday into Wednesday.

NATIONALLY: Not much going across the Fruited Plain with those Freeze Warnings across the Sunbelt accounting for most of the colors on the watch, warning, and advisory map.

DANCING WITH THE STATS: 1.2” inches of snow at Cincinnati, OH was enough to set a new record for November 12th.

IS HURRICANE SEASON OVER? It was an active finish to the 2022 Atlantic Hurricane Season with 3 hurricanes forming in November. The last time that happened was in 2001. A scan of the next 2 weeks off the deterministic GFS doesn’t reveal any systems that threaten to become tropical cyclones over the Atlantic, Caribbean, or Gulf of Mexico. According to Dr. Phil Klotzbach at Colorado State University, the number of named storms is pretty near normal with 14. The number of hurricanes is actually a little above normal at 8.

WEATHERBRAINS: This week, the panel will be talking about GIS and its importance in meteorology. Check out the show at www.WeatherBrains.com. You can also subscribe on iTunes. You can watch the show live at live.bigbrainsmedia.com or on James’ YouTube Channel You will be able to see the show on the James Spann 24×7 weather channel on cable or directly over the air on the dot 2 feed.

ON THIS DATE THREE YEARS AGO: A historically cold air mass shattered record lows across Alabama. Birmingham dropped to 18F, beating the previous mark by 4 degrees. Muscle Shoals, Huntsville, and Decatur established new record lows for the date at 19F, 17F, and 17F respectively. The coldest reading in the state was 13F at a coop reporter station in Hamilton in Marion County. 14F was reported in Haleyville and Vinemont. Follow my weather history tweets on Twitter. I am @wxhistorian at Twitter.com.