RADAR CHECK: There are various pockets of shower and thunderstorm activity across Alabama this afternoon… some of the more numerous ones are across the east and southeast counties, and between Tuscaloosa and Muscle Shoals. They are moving east/southeast, and the heavier storms are capable of producing strong gusty winds, heavy rain and frequent lightning. 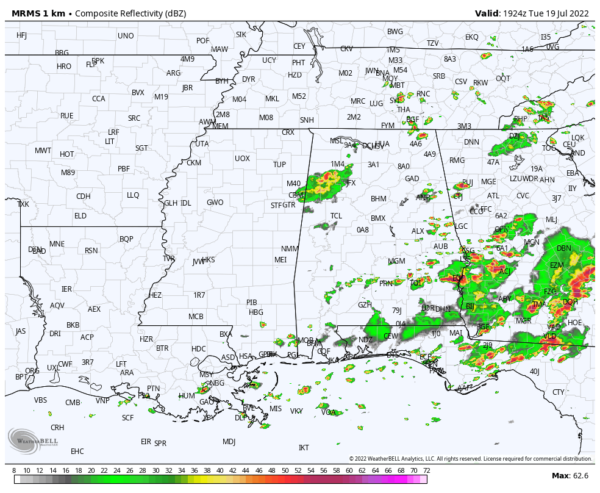 Away from the storms, the sky is partly sunny with temperatures mostly in the 86-92 degree range.

REST OF THE WEEK: We don’t expect much change tomorrow through Friday… a mix of sun and clouds each day with scattered showers and thunderstorms, most active between about 2:00 and 10:00 p.m. SPC has much of the state in a severe weather risk Thursday afternoon in their “Day 3” outlook for the potential for wet microbursts… local areas of strong winds that can bring down trees and power lines. The central counties are in a “slight risk” (level 2/5)… most of the rest of the state is in a “marginal risk” (level 1/5). 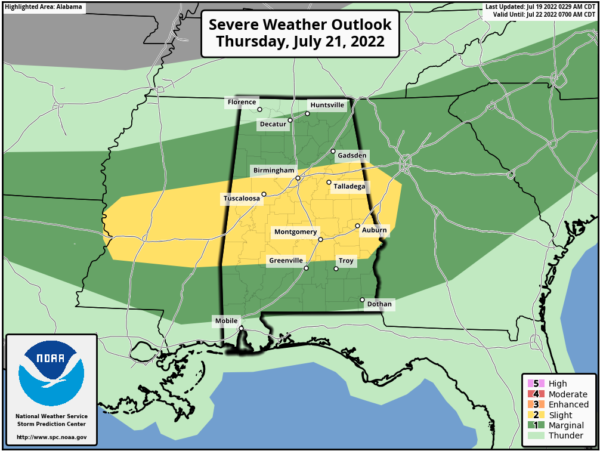 Highs will be generally in the low 90s.

THE WEEKEND AND NEXT WEEK: The classic summer pattern continues, although heat levels will be a bit higher, and afternoon storm coverage a bit lower as the upper high strengthens over the region. Partly sunny days, highs mostly in the mid 90s. The dog days of summer. See the daily Weather Briefing video for maps, graphics, and more details. 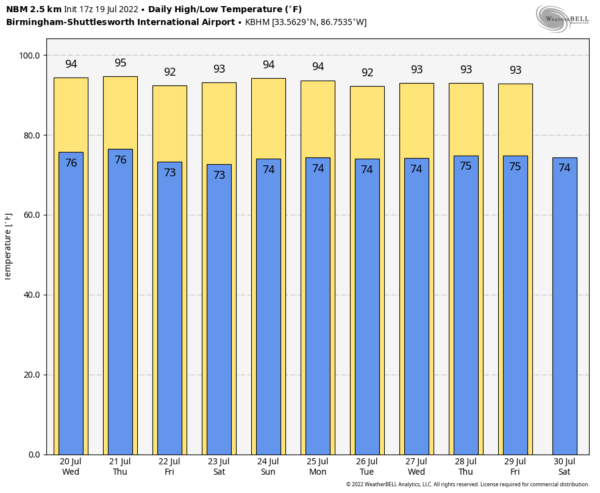 TROPICS: Another very quiet day across the vast Atlantic basin. Tropical storm formation is not expected through the next five to seven days.

ON THIS DATE IN 1886: The 1886 Atlantic Hurricane season was a very active year with ten hurricanes, seven of which struck the United States. During the evening hours of July 18th, a category one storm made landfall near Homosassa Springs, Florida. Damage was slight as the area was thinly inhabited. The hurricane weakened to tropical storm status south of Gainsville and emerged on the eastern side of Florida, south of Jacksonville during the morning hours of the 19th. This was the fourth hurricane to make landfall in the United States.

ON THIS DATE IN 2006: A derecho impacted a sellout crowd of almost 44,000 St. Louis Cardinals fans, packed into the new Busch Stadium. Winds of about 80 mph whirled around the St. Louis area, sending the fans running for shelter. The winds knocked out power and broke windows out of the press box. Nearly two minutes after the winds began at 100 mph, they stopped, and it started to rain. In all, about 30 people were injured at the stadium.