RADAR CHECK: Again today we have random, scattered showers and storms in progress across Alabama. Some of the heaviest rain at mid-afternoon was over the northeast quarter of the state, and over some of the southern counties. Stronger storms are producing heavy rain, strong gusty winds, small hail, and gobs of lightning. Additional showers and storms could form anywhere over the next 7-10 hours; most of the activity will end by midnight. Away from the storms, we have a mix of sun and clouds with temperatures in the 86-90 degree range, which is below average for mid-August in Alabama.

TOMORROW/THURSDAY: The weather won’t change much. Occasionally cloudy both days with scattered to numerous showers and thunderstorms likely, most active between noon and midnight. Odds of any one spot seeing rain both days are 60-70 percent, and afternoon highs will be mostly in the upper 80s.

FRIDAY AND THE WEEKEND: Drier air begins to creep into North Alabama Friday; best chance of scattered storms will be over the southern half of the state. Then, over the weekend, a decent part of the state will be dry with slightly lower humidity levels, and slightly cooler nights. Some cooler spots over North Alabama could reach the low 60s early Saturday and Sunday morning. Isolated showers can’t be totally ruled out (this is August, after all)… but they should be few and far between, and confined mostly to the southern counties. Highs over the weekend will remain between 87 and 90 degrees.

NEXT WEEK: The weather will remain relatively dry Monday and Tuesday with only isolated showers; scattered showers and storms begin to increase over the latter half of the week as moisture levels rise again. Highs will be close to 90 most days… there is no sign of any excessive heat issues for the next ten days or so. See the daily Weather Briefing video for maps, graphics, and more details. 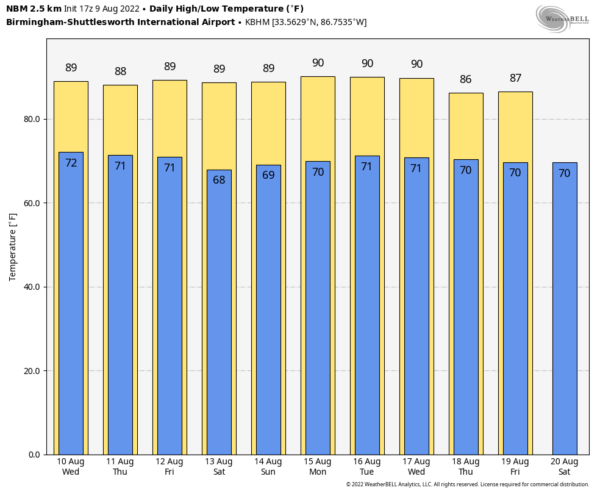 TROPICS: Shower and thunderstorm activity remains disorganized associated with a tropical wave located a few hundred miles southwest of the Cabo Verde Islands. While some gradual development of this system is possible over the next several days, environmental conditions are forecast to become less favorable by this weekend. This system is expected to move westward to west-northwestward at 15 to 20 mph across the tropical Atlantic during the next several days.

NHC now gives the system a 30 percent chance of development over the next five days. If anything happens to form, most likely it will turn north well before reaching the U.S. 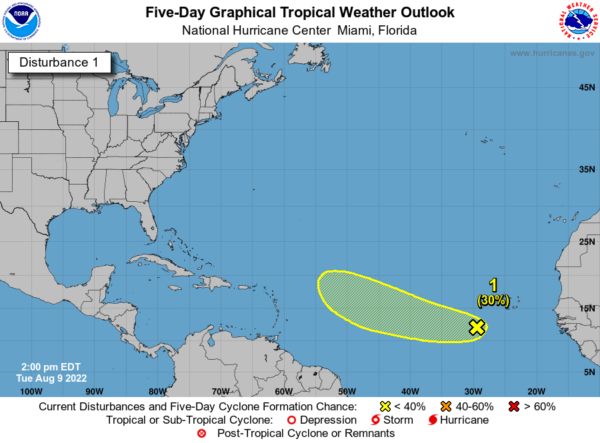 ON THIS DATE IN 1969: An F3 tornado hit Cincinnati, Ohio, killing four persons and causing fifteen million dollars property damage. The tornado moved in a southeasterly direction at 40 to 50 mph.