RADAR CHECK: Random, scattered showers and thunderstorms are developing over the northern half of Alabama this afternoon, otherwise the sky is partly sunny with temperatures mostly in the upper 80s. Storms have been more widespread today over the southwest counties, where heavy rain was falling along the Alabama Gulf Coast at times this morning. Like recently days, storms this afternoon are slow movers and are producing heavy rain, gusty winds, and lots of lightning. Most of the showers and storms will dissipate by 10:00 tonight. 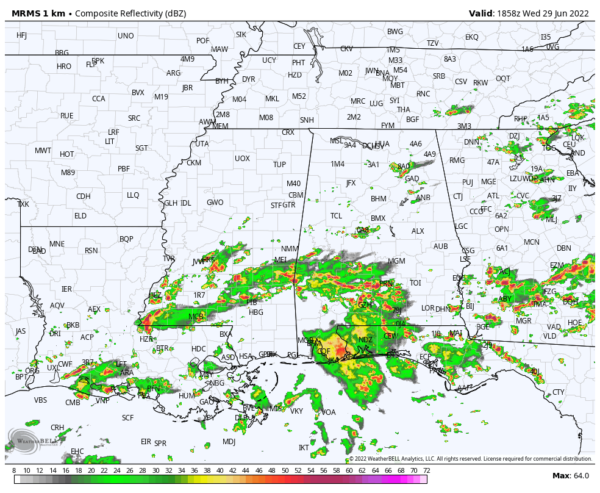 REST OF THE WEEK AND THE HOLIDAY WEEKEND: The overall weather pattern just won’t change much through early next week. A weak stationary front near I-59 will dissipate tonight, and all of Alabama will be in a humid airmass with high precipitable water values. This means the daily round of random, scattered showers and thunderstorms. They will be most active from about 2:00 until 10:00 p.m… and odds of any one spot seeing rain each day through the weekend is 45-55 percent. Away from the storms, we will have a mix of sun and clouds each day with highs between 86 and 90 degrees for most places.

For those that have outdoor plans for the weekend, it certainly won’t be a wash-out, and you will see a decent amount of sun. The thunderstorms that develop will be random, and no real way of knowing in advance exactly when and where they pop up… you just have to watch radar trends. And, remember, “when thunder roars, go indoors”… lightning is usually the biggest hazard with storms on a muggy summer afternoon.

REST OF NEXT WEEK: Heat levels tick up a bit next week with highs in the low 90s, and afternoon storms will be a little more scattered in nature. But, the same overall pattern will stay in place… classic summer weather for the Deep South. See the daily Weather Briefing video for maps, graphics, and more details.

TROPICS: Showers and thunderstorms associated with an area of low pressure located over the northwestern Gulf of Mexico have increased since this morning but remain disorganized. This system is forecast to move slowly westward and approach the coast of southern Texas and northern Mexico by early tomorrow. Some slow development is still possible and it could become a short-lived tropical depression near the coast before it turns northwestward and moves inland over Texas tomorrow. Regardless of development, heavy rain will be possible along portions of the Texas coast for the next few days. This feature will not impact the Central Gulf Coast (Gulf Shores to Panama City Beach)… it is far to the west. 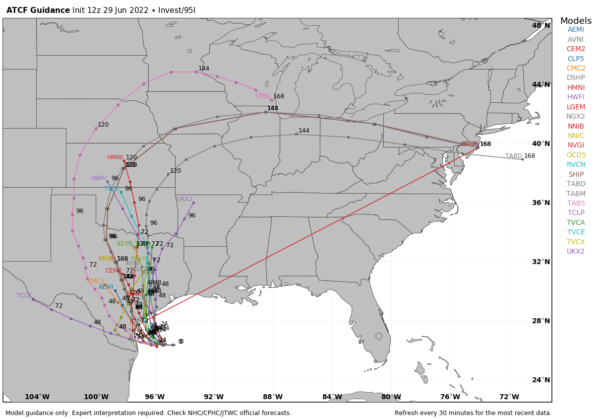 In the far southern Caribbean, Potential Tropical Cyclone 2 is hugging the coast of South America this afternoon. It will move into Central America as a tropical storm Friday night… this system will remain far south of the U.S. 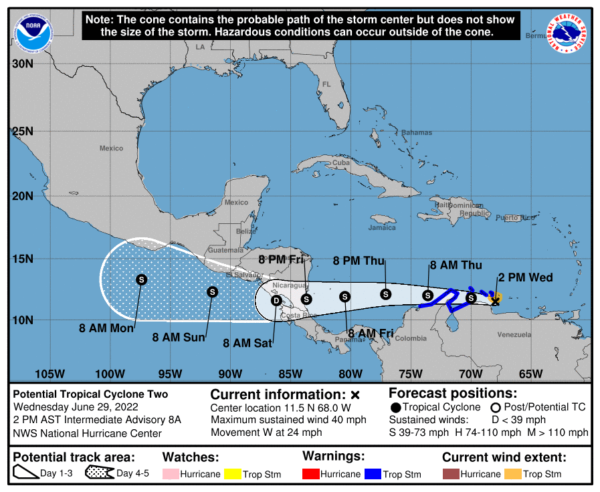 ON THIS DATE IN 1998: “The Corn Belt Derecho of 1998” in the following states NE, IA, IL, IN, KY. A derecho which originated in far southeast South Dakota moved across Illinois during the afternoon and evening and continued as far east as Ohio the next morning. Every county in central Illinois sustained some damage, as these severe thunderstorms passed. Winds gusted in the 60 to 80 mph range, with some localized microbursts producing winds more than 100 mph. Significant damage occurred in the microburst areas, including the towns of Morton, McLean, LeRoy, and Tolono. In Tolono, 22 cars of a southbound 101-car Illinois Central freight train were blown off the tracks. It was unknown how many vehicles were picked up by the wind, but 16 cars were turned over, and another six derailed but remained upright.

ON THIS DATE IN 2012: The Mid-Atlantic and Midwest derecho was one of the deadliest and most destructive fast-moving severe thunderstorm complexes in North American history. The progressive derecho tracked across a large section of the Midwestern United States and across the central Appalachians into the mid-Atlantic states on the afternoon and evening of June 29, 2012, and into the early morning of June 30, 2012. It resulted in a total of 22 deaths, millions of power outages across the entire affected region, and a damage total of $2.9 billion.