SUN AND STORMS: A weak surface front is stalled across Alabama this morning, not too early from I-20. This means most of the showers and storms today, like yesterday, will be over the southern 2/3 of the state, but an isolated shower can’t be ruled out over North Alabama as well this afternoon. Odds of any one spot getting wet today are 35-45 percent along and south of I-20, and 15-25 percent north of I-20 (over the northern third of the state). Otherwise, expect a mix of sun and clouds today with a high in the 86-89 degree range for most places. The average high for June 20 in Birmingham is 90.

The weather won’t change much over the rest of the week as the weak surface front dissipates, and we stay in a very humid airmass. Partly sunny, humid days with “scattered mostly afternoon and evening showers and thunderstorms”. Understand summer storms are random… there is no way of knowing in advance exactly when and where they pop up, and who gets the rain, but any given community will have a good chance of seeing at least one or two downpours between now and Friday. Highs will remain in the upper 80s most days.

FOURTH OF JULY WEEKEND: No real change. A classic summer mix of sun and scattered thunderstorms Saturday through Monday with highs in the upper 80s. Most of the storms will come from about 2:00 until 10:00 p.m… and the chance of any one spot getting wet each day is 45-55 percent. There is a chance some deeper tropical moisture could move into the state from the west (the tropical wave now in the western Gulf); if that happens rain coverage will be higher each day. But, one way or another the weekend won’t be a “wash out”. Understand you will have the chance of a shower or storm just about every day in summer in Alabama. It is just that time of the year.

REST OF NEXT WEEK: We will stick with a persistence forecast; partly sunny days, a few showers and storms during the afternoon and evening hours, and highs back in the low 90s. See the daily Weather Briefing video for maps, graphics, and more details. 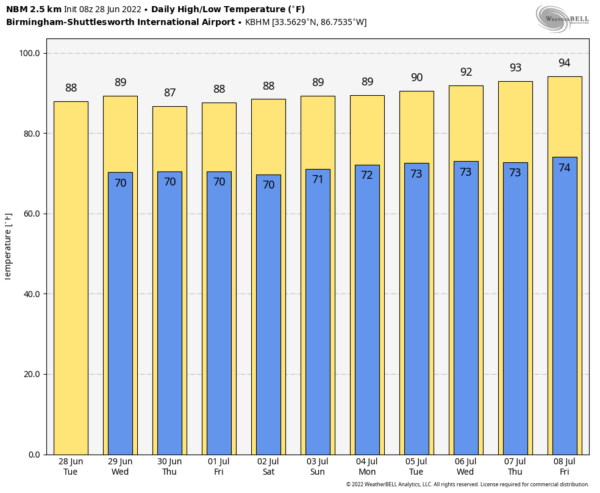 TROPICS: A surface trough of low pressure is located over the north-central Gulf of Mexico. While shower and thunderstorm activity with this system is currently limited, surface pressures have fallen some over the last 24 hours. Some additional development of this system is possible as it moves generally westward at 5-10 mph and approaches the coast of Texas during the next few days. NHC gives it a 30 percent chance of development over the next few days; one way or another it will likely enhance the chance of rain for parts of East and South Texas later this week. 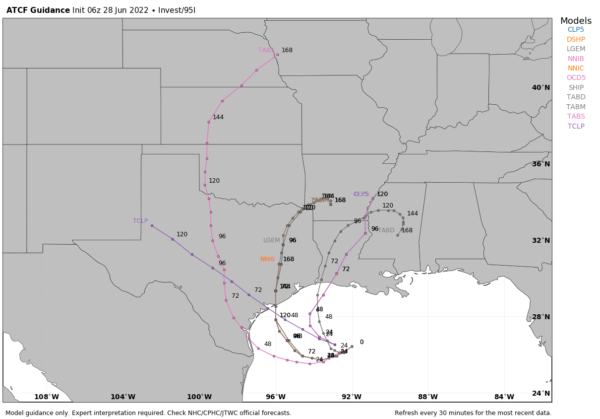 In the Atlantic, “Potential Tropical Cyclone 2” is expected to become a depression or storm later today as it moves through the Windward Islands. This feature will skirt the northern coast of South America as it remains at a very low latitude, and is forecast to make landfall on the coast of either Costa Rica or Nicaragua Saturday morning, possibly as a hurricane. This is far south of the U.S. 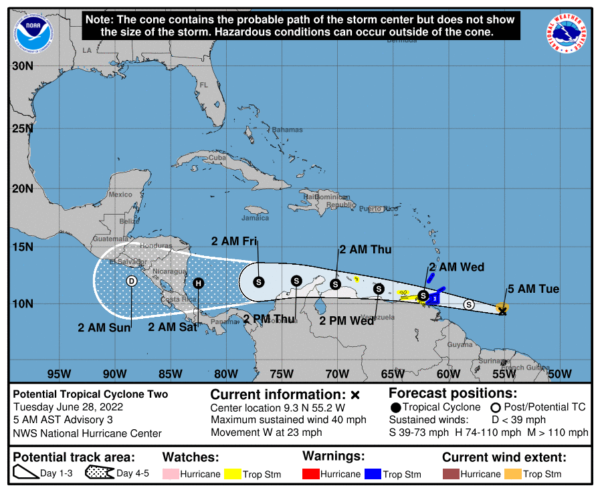 ON THIS DATE IN 1924: An estimated F4 tornado struck the Ohio towns of Sandusky and Lorain, killing 85 people and injuring over 300. This tornado is the deadliest ever in Ohio history.

ON THIS DATE IN 1975: Lightning strikes Lee Trevino and two other golfers at the Western Open golf tournament in Oak Brook, Illinois.