ACTIVE NIGHT AHEAD: As expected, most of Alabama is enjoying a spring-like day today with temperatures in the 70s; a few spots in West Alabama are flirting with 80 degrees. The exception is the northeast corner of the state, where a wedge of cooler air still in place. A cold front will slice into the state tonight, and the risk of severe storms has increased based on the latest model data. SPC has introduced a “slight risk” (level 2/5) for areas north of a line from Northport to Warrior to Guntersville, and a “marginal risk” (level 1/5) extends as far south as Jackson, Fort Deposit, and Opelika. 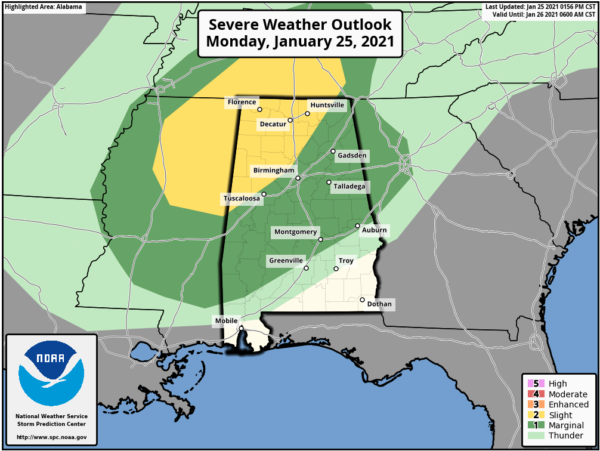 A few storms tonight across the northern 2/3 of Alabama could produce hail and strong winds; an isolated tornado or two is possible as well. The main window for severe storms is from 7:00 this evening until 2:00 a.m. Tuesday. Be sure you can hear severe weather warnings if they are needed tonight.

TOMORROW/WEDNESDAY: The front will stall out tomorrow close to a line from Grove Hill to Montgomery to Lafayette; rain is still possible tomorrow south of the front. The northern half of the state will be mostly dry… a few peeks of sun are possible with temperatures rising to near 70 degrees by afternoon. Then, a wave forms on the stalled front, and rain is likely statewide tomorrow night into Wednesday. Additional rain amounts of 1/2 to 1 inch are likely… severe storms are not expected.

Temperatures could very well fall during the day Wednesday over North Alabama, and some snow is possible over parts of Tennessee in the colder air there.

THURSDAY/FRIDAY: Thursday will be mostly sunny but much colder with a high between 48 and 52. We drop well down into the 20s early Friday morning with a clear sky and light wind… then the sky will remain sunny during the day Friday with a high in the mid 50s.

THE ALABAMA WEEKEND: Saturday looks dry with a partly sunny sky; the high will be close to 60. Then, the next weather system will bring rain into the state Saturday night into Sunday… for now it looks like the main window for rain comes from about midnight Saturday night until 12:00 noon Sunday. Sunday’s high will be in the mid to upper 50s.

NEXT WEEK: The weather looks dry with seasonal temperatures for the first half of the week (highs in the 50s, lows in the 30s)… but rain returns later in the week Thursday night or Friday. See the Weather Xtreme video for maps, graphics, and more details.

ON THIS DATE IN 1940: On the morning of January 25, 1940, the headlines on the Birmingham Age-Herald screamed that more cold was in store for the state. And it had already been very cold. Since an arctic cold wave invaded the state on the night of the 18th, overnight lows had been in the teens or single digits every morning except for the morning of the 23rd when the low was 24F. The average temperature of 21.3 for the seven day period ending January 25, 1940 still stands as the ninth coldest seven day period in Birmingham history.

A Gorgeous Sunday; Dry Until the Weekend

A Gorgeous Sunday; Dry Until the Weekend