QUIET MORNING: Alabama is rain-free this morning; drier air has dropped into northern counties, where temperatures have fallen into the mid 60s in many places. Most of the showers and storms that form this afternoon will be over the southern part of the state, where deep moisture lingers. SPC maintains a “marginal risk” (level 1/5) of severe thunderstorms for Southwest Alabama, where the heavier storms could produce strong winds… 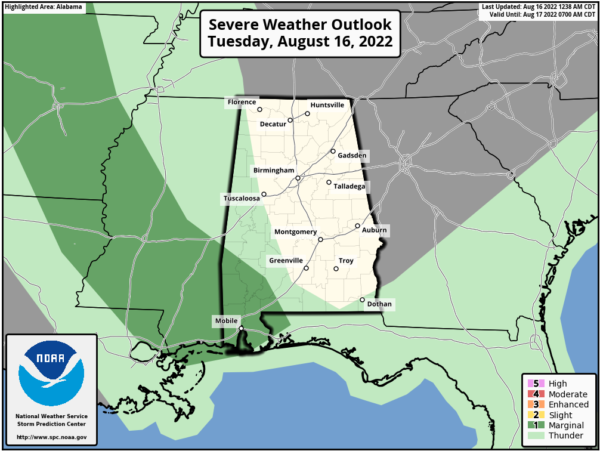 North Alabama will be generally dry, although showers could move in tonight ahead of a disturbance moving down the northwest flow aloft. The high today will be close 90 degrees; the average high for Birmingham on August 16 is 91.

REST OF THE WEEK: Moisture levels rise, and we will have some risk of showers and storms on daily basis tomorrow through Friday. Understand it won’t rain everywhere each day, but odds of any one spot seeing rain over the three day period at least one time is 70-80 percent. Most, but not all, of the showers and storms will come from around noon to midnight, and highs will drop into the mid 80s because of clouds and showers.

THE ALABAMA WEEKEND: Not much change. Look for a mix of sun and clouds Saturday and Sunday with scattered to numerous showers and thunderstorms, mostly during the afternoon and evening hours. Highs will remain below average, generally in the upper 80s. The weekend won’t be a “wash-out”, but a few passing showers are a decent possibility.

NEXT WEEK: Sure looks highs will remain below 90 on most days next week; warm, humid weather continues with the risk of showers and storms on a daily basis. See the daily Weather Briefing video for maps, graphics, and more details. 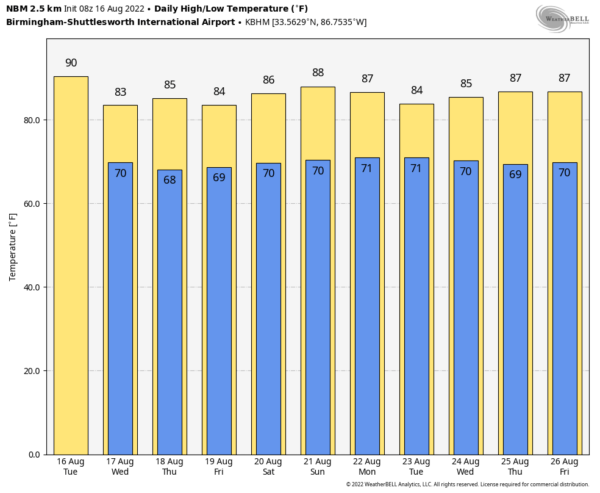 FOOTBALL WEATHER: The high school football season kicks off Friday night for most schools; the weather will be warm and humid, and random storms will be around during the evening hours. No way of knowing in advance the exact locations, but a few games could experience a lighting delay. Temperatures will be in the low to mid 80s at kickoff, falling into the upper 70s by the second half.

TROPICS: A tropical wave currently located over the southwestern Caribbean Sea is forecast to move across Central America during the next few days and emerge over the Bay of Campeche, where an area of low pressure could form on Friday. Some gradual development of this system is possible while it moves northwestward over the southwestern Gulf of Mexico through the weekend.

NHC gives it a 20 percent of development over the next five days. 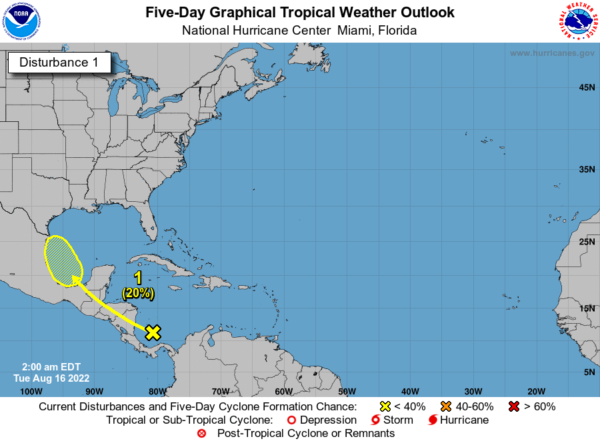 ON THIS DATE IN 1992: A tropical wave in the Atlantic grew into a tropical depression; the next day it would become Tropical Storm Andrew. Further development was slow, as the west-northwestward moving Andrew encountered an unfavorable upper-level trough. Indeed, the storm almost dissipated on August 20 due to vertical wind shear. By August 21, Andrew was midway between Bermuda and Puerto Rico and turning westward into a more favorable environment. Rapid strengthening occurred, with Andrew reaching hurricane strength on the 22nd and Category 4 status on the 23rd. It would go on to be one of the most destructive hurricanes on record in the U.S… striking South Florida August 24, and Louisiana August August 26.