MILD DAY AHEAD: We project a high in the 67-72 degree range across Alabama today with a mix of sun and clouds; the average high for Birmingham on January 11 is 54. Most of the state will be dry, but a few widely scattered showers could show up along the Gulf Coast this afternoon.

STORMS RETURN TOMORROW: A cold front will bring a band of showers and thunderstorms tomorrow… SPC has much of the state in a “slight risk” of severe storms (level 2/5). 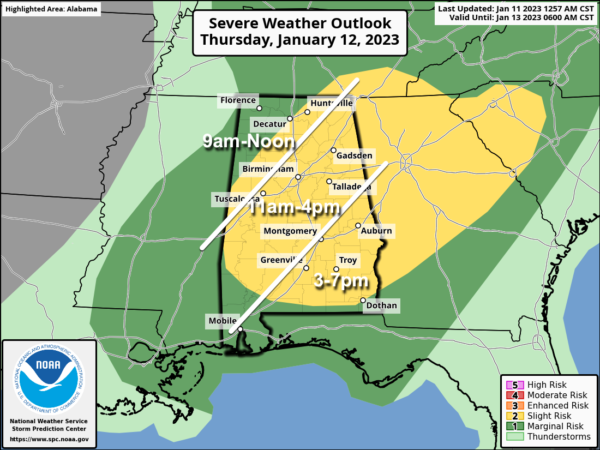 A line of thunderstorms will enter Northwest Alabama tomorrow morning around 8:00… and will pass southward through the state during the day. Tsolated to scattered damaging winds will be the primary severe threat with this mainly linear convection. A brief tornado or two also appears possible with embedded circulations, but the overall threat is low. Rain amounts will be generally around 1/2 inch. Otherwise, the day will be mostly cloudy, mild, and windy with a high in the mid to upper 60s. Gradient winds (not related to thunderstorms) could gust to 35 mph at times.

FRIDAY AND THE WEEKEND: Friday will be breezy and much colder. With a partly sunny sky, temperatures won’t get out of the 40s over North Alabama. And, a few morning snow flurries are possible across the northeast corner of the state, but there won’t be any impact or accumulation. Early morning emperatures will be well below freezing over much of the state over the weekend. The sky will be sunny both days… the high Saturday will be in the 40s and 50s, followed by 50s and 60s Sunday.

NEXT WEEK: The weather looks rather unsettled with multiple rounds of rain and thunderstorms likely… the first one coming Monday night into Tuesday morning. Highs will be mostly in the 60s; See the daily Weather Briefing video for maps, graphics, and more details. 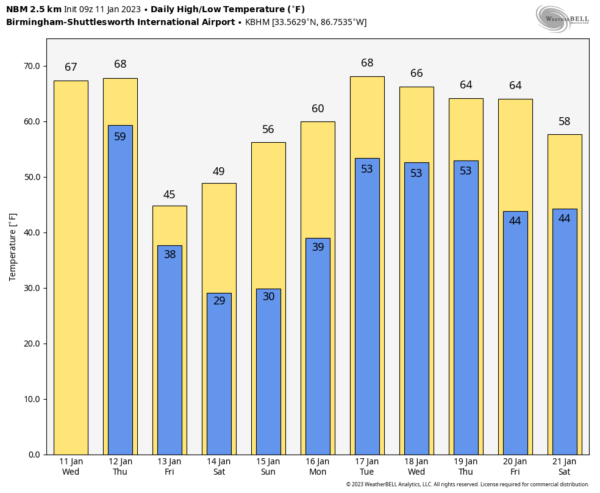 ON THIS DATE IN 1898: An estimated F4 tornado struck the city of Fort Smith, Arkansas, just before midnight. The tornado, which touched down about 100 miles southwest of town, killed 55 people and injured 113 others along its track.

ON THIS DATE IN 1918: A powerful area of low pressure brought snow and bitterly cold temperatures to the Deep South. Birmingham picked up an inch of snow. In far Southeast Alabama, an estimated F3 tornado virtually damaged every building in the town of Webb. The tornado leveled one rural school, killing one teacher and seven students.