RADAR CHECK: A band of strong thunderstorms is lined up from northern Bibb County around West Blocton, through the Birmingham metro, then to near Gadsden and Weiss Lake at mid-afternoon. These storms are producing heavy rain, gusty winds, and lots of lightning. They are moving slowly to the east/southeast, and will slowly diminish after sunset. 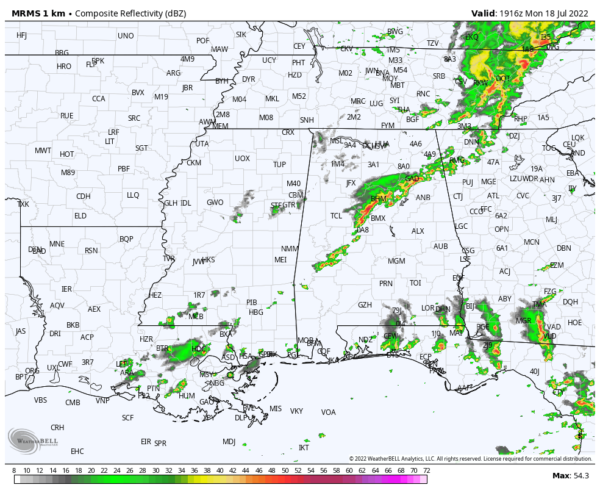 Away from the storms, most of the sun is over the southern half of the state this afternoon where temperatures have reached the low 90s.

REST OF THE WEEK: We will forecast a mix of sun and clouds on a daily basis tomorrow through Friday, with scattered showers and thunderstorms possible each day, mostly from about 2:00 until 10:00 p.m. As usual, the storms will be very random, and it won’t rain everywhere. Odds of any one spot getting wet each day will run in the 35-45 percent range. The high tomorrow will be in the 87-92 degree range, and mostly in the low 90s Wednesday through Friday.

THE ALABAMA WEEKEND: The upper high will build over the region, meaning showers and storms over the weekend should be few in number. Partly to mostly sunny days, fair nights, and highs in the mid 90s.

NEXT WEEK: The upper high will stay pretty much right on top of us through much of next week, meaning hot and mostly dry weather conditions for the state with only isolated afternoon storms. Highs will be mostly in the mid 90s… See the daily Weather Briefing video for maps, graphics, and more details. 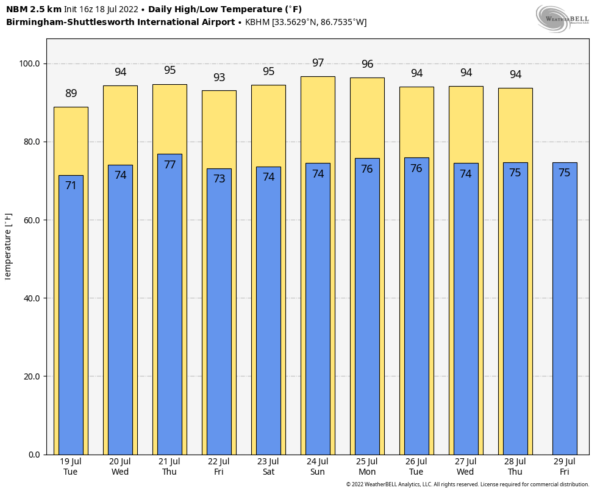 TROPICS: Once again today, the Atlantic basin is very quiet, and tropical storm formation is not expected through the week. Remember, the peak of the season comes in August, September, and early October.

ON THIS DATE IN 1996: Heavy rain in north central and northeast Illinois led to widespread flooding. Aurora reported 16.94 inches of rain, establishing a state record for the most rain in a single day. Other heavy totals included 13.60 inches at Joliet, 9.24 inches in Wheaton, 8.09 inches in DeKalb, and 7.82 inches at Elgin. This event is often called “the second most damaging weather disaster in Illinois History.”

Loo for the next Weather Briefing video here by 6:00 a.m. tomorrow…