RADAR CHECK: Scattered strong thunderstorms are in progress over parts of Central and East Alabama this afternoon… drifting westward. Heavier storms are producing strong gusty winds, lots of lightning, and heavy rain. Otherwise, heat headlines the forecast again today with temperatures in the 90s statewide (except where storms have formed). Scattered storms end this evening, and the sky will be mostly fair tonight with a low in the 70s.

Temperatures rise into the 90s again tomorrow, but scattered storms should be more numerous by afternoon as a weak disturbance rotates around the bottom of the upper high centered just to the north of here. It won’t rain everywhere, but where thunderstorms do form they will be capable of producing strong winds. SPC has now defined a “slight risk” (level 2/5) of severe thunderstorms for areas east of a line from Tuscaloosa to Gardendale to Weiss Lake… a “marginal risk” (level 1/5) covers the rest of the state, with the exception of the northwest counties. 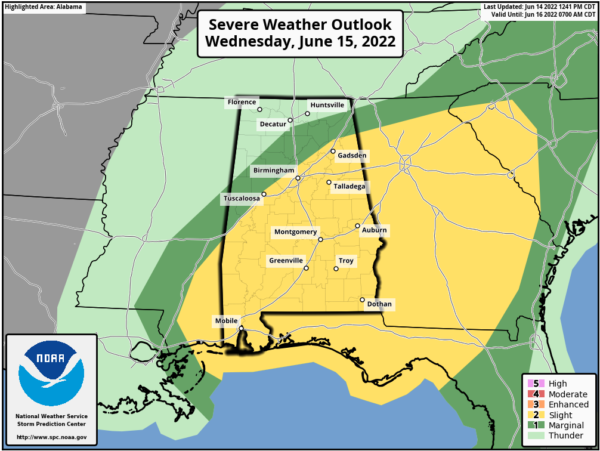 The chance of any one spot seeing rain tomorrow is 30-40 percent, with the higher probabilities south of I-20.

THURSDAY/FRIDAY: Highs stay in the 90s, and a few random, pop-up afternoon and evening showers and storms are possible both days. Again, the rain won’t be widespread, and probabilities for rain at any given point are around 20 percent both days. Highs will be generally in the mid 90s as the June heat wave continues.

THE ALABAMA WEEKEND: A drier airmass will drop into the state Friday night, and we expect a dry weekend with lower humidity levels and cooler nights…. some of the cooler spots across North Alabama could drop into the 50s early Sunday morning. Highs will be mostly in the low 90s both days.

NEXT WEEK: Hot weather continues as the upper high lingers over the region. Highs will remain generally in the 90s, and afternoon storms should be widely scattered… See the Weather Xtreme video for maps, graphics, and more details. 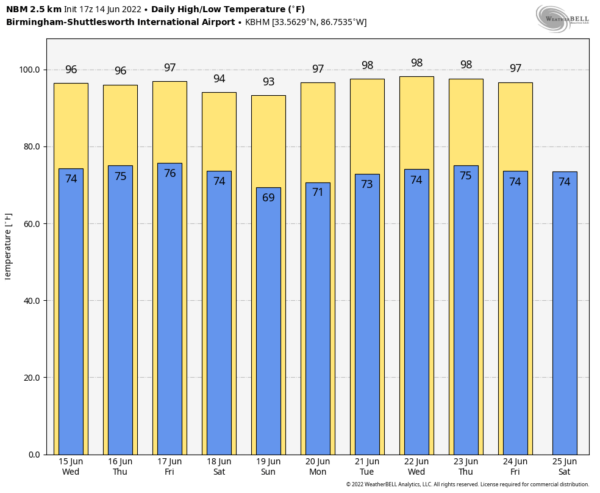 TROPICS: Satellite imagery and surface observations indicate that a small area of low pressure has formed in the southwestern Caribbean Sea, accompanied by disorganized showers and thunderstorms. Further development of this system is possible while it drifts northwestward near the coasts of Nicaragua and Honduras, and it could become a tropical depression later this week if the disturbance remains over water. An Air Force Reserve Hurricane Hunter aircraft is scheduled to investigate this system tomorrow if necessary. Regardless of development, the low could produce periods of heavy rainfall across portions of eastern Nicaragua and eastern Honduras through late this week.

NHC gives the system a 40 percent chance of development over the next five days. If anything forms here, it will most likely wind up in the Bay of Campeche, then drifting westward into Mexico, south of Texas. We see no tropical trouble for the Central Gulf Coast (places like Gulf Shores, Destin, and Panama City Beach) for the next seven days.

ON THIS DATE IN 1903: Major flash flooding along Willow Creek destroyed a significant portion of Heppner, Oregon on this day. With a death toll of 247 people, it remains the deadliest natural disaster in Oregon.