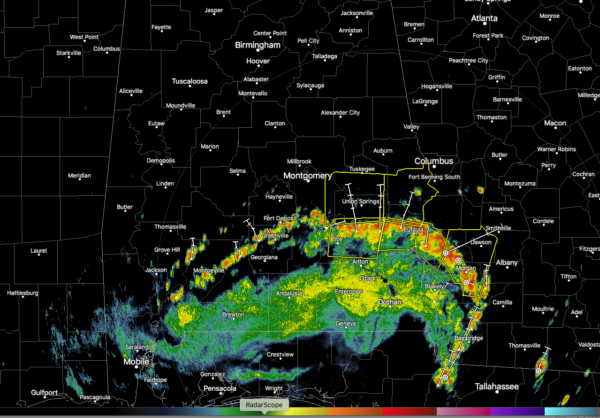 Widespread but disorganized thunderstorms over the Gulf of Mexico are associated with a trough of low pressure over the southwestern Gulf. A line of storms formed over the northern Gulf during the night and moved onshore in the Florida Panhandle this morning.

Strong storms on the leading edge of the larger rain area are moving north, and severe thunderstorm warnings have been issued ahead of it including parts of Pike, Bullock, Macon, Montgomery, Russell, and Barbour Counties.

The leading edge currently extends from Frisco City to Greenville to Troy to Eufaula. It is moving north at about 15-20 mph. It looks like it will weaken with time as me moves away from the Gulf, but if it can hold together it will reach the Montgomery area around 1:30 p.m., the Clanton area around 3:30 p.m. and southern parts of the Birmingham area around 4-430 p.m.

It certainly has enough instability to work with. CAPE values across Central Alabama are rising through the 1,500-2,500 j/kgm2s2 range. There is little wind shear, but the thunderstorm complex is being powered by a cold pool that has developed along the advancing heavy rainfall shield.

Temperatures are now in the lower and middle 80s across the area. Low 70s are common in South Alabama behind the storms. Skies are partly cloudy, but a thick cumulus field is growing and increasing in vertical development. Scattered summertime storms will develop during the afternoon as well ahead of the thunderstorm complex coming through South Alabama. Some of them could become severe during the afternoon and evening hours. Damaging winds and hail will be possible. We probably won’t see any big hail like yesterday, when folks near the Warrior River in western Jefferson County got hail up to 2″ in diameter.

Be alert for the lightning, heavy rain, and gusty winds that will bring down a few trees.