WARM APRIL DAY: Temperatures are in the 78-82 degree range across most of Alabama this afternoon with a partly sunny sky. Clouds will increase over the next few hours, and a band of showers and storms will move into the state late tonight. SPC maintains a “slight risk” (level 2/5) for some of the counties near the Mississippi border late tonight, with a “marginal risk” (level 1/5) as far east as Huntsville, Columbiana, Autaugaville, and Mobile. 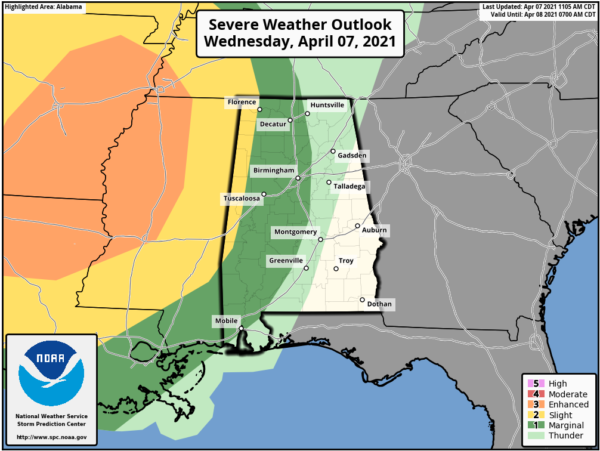 Storms could enter West Alabama as early as 10:00 tonight, but most of the activity comes after midnight, into the pre-dawn hours tomorrow. Some of the thunderstorms could produce strong, gusty winds and small hail. A brief, isolated tornado is possible, but not likely. The storms should be generally weakening as they move through, but everyone still needs to be a in a position to hear severe weather warnings if they are needed. Most of the storms should be out of the state by mid-morning.

The sky becomes partly sunny tomorrow afternoon as a slot of dry air works into the state, and if the sun does break out temperatures will likely soar into the low to mid 80s, making it one of the warmest days so far this year.

FRIDAY AND THE WEEKEND: The active pattern continues. Another wave will bring a chance of showers or storms tomorrow night and Friday. Know that Friday won’t be a wash-out… in fact a decent part of the day will probably be dry. But, the air will be very unstable, and storms that form could produce strong winds and hail. Friday’s high will be in the 75-79 degree range.

Another batch of rain and storms will arrive Friday night into part of the day Saturday, and again we will have some risk of strong to severe thunderstorms. SPC is keeping parts of West Alabama in a “slight risk” (level 2/5) Friday, with a “marginal risk” (level 1/5) for the rest of the state.

It is too early to know the magnitude of the threat Friday night into Saturday morning; we will have a much better idea in about 24 hours. There is a decent chance the best chance of rain and storms will shift into South Alabama Saturday afternoon, with drier conditions for the northern half of the state. The high Saturday will be in the 71-75 degree range.

Then, Sunday looks mostly dry statewide with just some risk of isolated showers over the southeast counties. The sky will be partly to mostly sunny Sunday with a high in the mid 70s…. very close to seasonal averages for mid-April in Alabama.

NEXT WEEK: Forecast confidence is low with a complex pattern in place and great model variability. Monday looks dry, a few showers are possible Tuesday or Wednesday with a weak surface front drifting into the state… for now we don’t see any severe weather signals next week. See the Weather Xtreme video for maps, graphics, and more details. 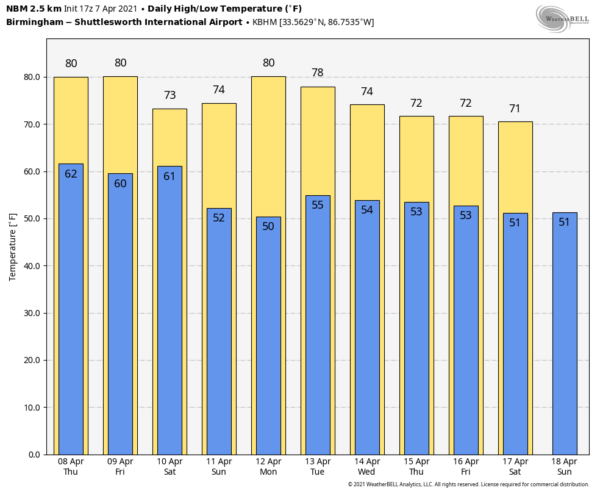 ON THIS DATE IN 2006: Severe thunderstorms moved through Alabama producing over twenty tornadoes, all EF-0/EF-1. EF-1 tornadoes touched down near Gardendale and Roebuck in Jefferson County.