WARM SPRING DAY: Temperatures are mostly in the 78-82 degree range across Alabama this afternoon with a good supply of sunshine. The average high for Birmingham on April 6 is 72. The sky will stay mostly fair tonight with a low in the upper 50s.

The weather stays dry tomorrow with a partly sunny sky… the high will be close to 80 degrees. A band of showers and storms will move into the state late tomorrow night into Thursday morning; SPC has defined a small “slight risk” area (level 2/5) for a few counties near the Mississippi border… with a “marginal risk” (level 1/5) as far east as Huntsville, Rockford, Prattville, and Mobile. This outlook is valid through 7:00 a.m. Thursday. 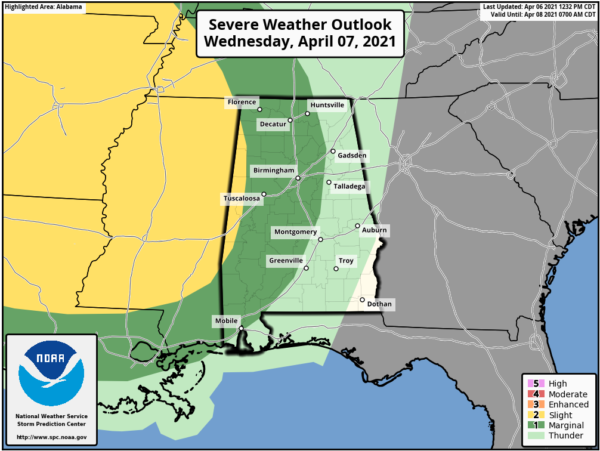 The storms will likely exhibit a slow weakening trend as they move into Alabama, but they will still be capable of producing strong gusty winds and small hail. An isolated, brief tornado is possible, but not likely. The heavier storms will be moving through from about midnight tomorrow night through 10:00 a.m. Thursday.

A slot of drier air will move into the state Thursday afternoon, and some clearing is possible with highs in the 70s.

FRIDAY THROUGH THE WEEKEND: The weather will be unsettled Friday and Saturday with occasional showers and thunderstorms both days. No doubt strong thunderstorms will be possible at times, maybe even a few severe storms, but it is a little too early to define any specific threat level. Rain amounts between tomorrow night and Saturday night will be in the 2-3 inch range for most of the state… some isolated flooding issues could develop. Drier air moves into the state Sunday… the sky becomes partly sunny with a high in the mid to upper 70s.

NEXT WEEK: For now the weather looks generally dry Monday and Tuesday; showers and storms will return at some point over the latter half of the week, but it is very hard to be specific this far out in such an active pattern. See the Weather Xtreme video for maps, graphics, and more details. 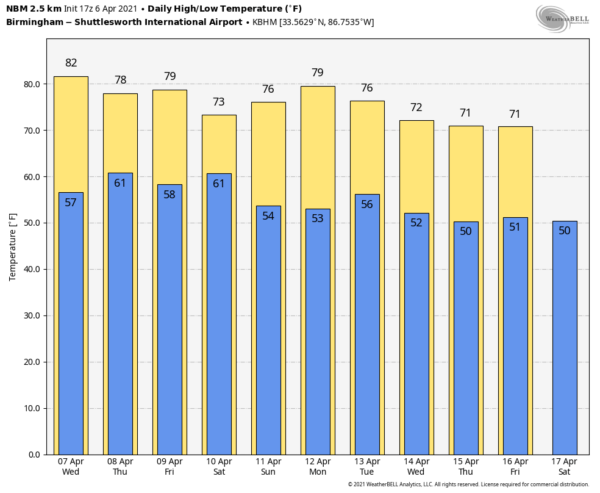 LAST FREEZE? Many are asking if we have experienced the last freeze of the season. Every year I recommend waiting until Apri 15 to plant anything harmed by freezing temperatures. Confidence is fairly high that we won’t see a freeze between now and April 15, but we are seeing signs of colder than average temperatures over the latter half of the month. I would say odds of a major freeze are very low, but a few frosty mornings can’t be ruled out during the latter half of April.

ON THIS DATE IN 1973: A major spring snowstorm dumped 11.6 inches of snow across Denver, Colorado. Most of the heavy wet snow of 10.1 inches fell on the 7th when temperatures remained in the 20s. The low temperature of 5 degrees on the 8th was a new record low for the date and the lowest for so late in the season.