RADAR CHECK: Light to moderate rain is lingering across Southeast Alabama this afternoon, but the severe storms have moved out of the state into North Florida and Georgia, where tornado watches remain in effect. The sky has partially cleared across parts of West Alabama, and temperatures are mostly in the 70s.

TOMORROW: A cold front will bring a line of showers and thunderstorms to the state tomorrow afternoon and tomorrow night, and those storms could be strong to severe. While the deeper moisture has moved out of the state, there will be a high level of instability statewide ahead of the front setting the stage for potential for hail and damaging winds in spots. An isolated tornado can’t be ruled out, although wind fields are not especially favorable for tornadoes.

SPC maintains an “enhanced risk” (level 3/5) of severe storms tomorrow afternoon/evening for places like Birmingham, Huntsville, Tuscaloosa, Anniston, Gadsden, and Fort Payne… most of the rest of the state is in a “slight risk” (level 2/5). 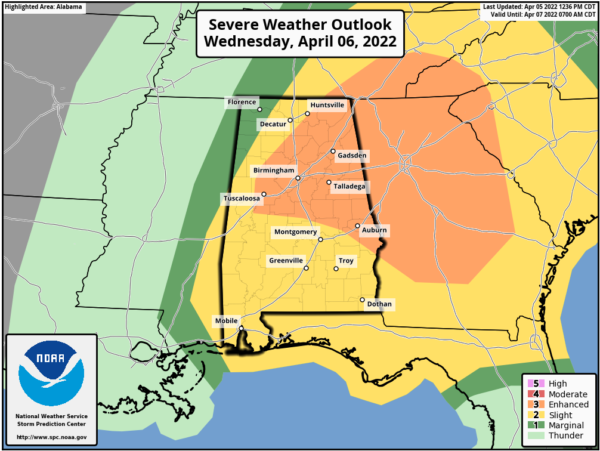 The storms will likely enter the northwest corner of the state around 3:00… the line will be near I-59 (Tuscaloosa/Birmingham/Gadsden) around 6:00 p.m.. and then into East Alabama after 7:00 p.m. Be sure you have a way of hearing warnings if they are needed tomorrow evening.

Thursday and Friday will be dry with a big cooling trend… the high Thursday will be in the mid 60s, and on Friday most places across the northern half of the state won’t get out of the 50s with a very cool breeze. The northeast corner of the state could hold in the 40s all day.

LATE SEASON FROST/FREEZE THREAT: Lows will drop into the 30-38 degree range early Saturday morning over the northern half of Alabama with potential for frost in most places, and a freeze for colder spots. Sunday morning could be just a cold… growers need to monitor temperature forecasts this week. On the positive side, the weekend will feature lots of sunshine with a high in the mid 60s Saturday, and low to mid 70s Sunday.

NEXT WEEK: Forecast confidence is not especially high… the latest model guidance suggests rain will return to the state late Monday into Tuesday and Wednesday; the latter half of the week looks warm and dry. See the Weather Xtreme video for maps, graphics, and more details. 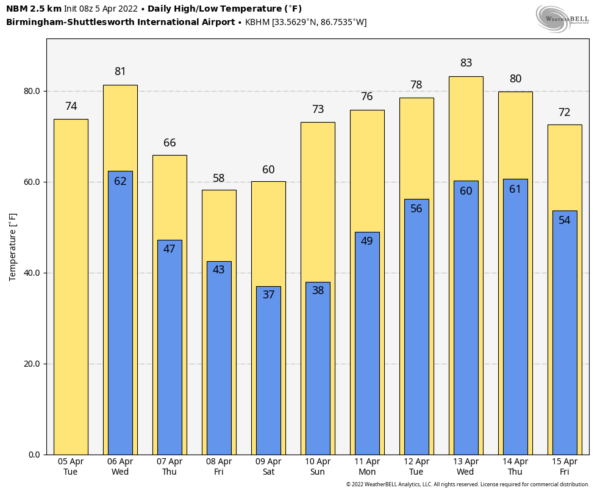 ON THIS DATE IN 1936: Approximately 454 people were killed in the second-deadliest tornado outbreak ever in U.S. More than 12 twisters struck Arkansas to South Carolina. An estimated F5 tornado cut a path 400 yards wide through the residential section of Tupelo, Mississippi. At least 216 people were killed, and 700 were injured. The tornado had a 15-mile long path and did $3 million in damage. One of the survivors in Tupelo was a baby of an economically strapped family who had an infant they’d recently named Elvis Aaron Presley. Gainesville, Georgia had at least 203 fatalities and 934 injuries from an estimated F4 tornado that occurred early the following morning.

In Alabama, four people were killed by a tornado in Red Bay (Franklin County) during this outbreak.

Look for the next Weather Xtreme video here by