RADAR CHECK: Showers and strong thunderstorms are active early this morning, especially over the eastern half of the state. We will maintain the chance of showers and thunderstorms through the day today, but it won’t be an all-day kind of rain, and you might see the sun break out at times. SPC has defined a “slight risk” (level 2/5) of severe storms for parts of Central and East Alabama today, with a “marginal risk” for much of the rest of the state. 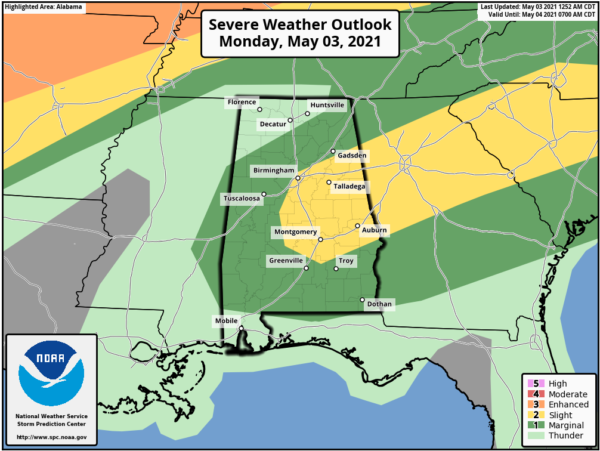 The main threat with the heavier thunderstorms today will come from small hail and strong, gusty winds. The high this afternoon will be in the low 80s.

TOMORROW: We have a more significant severe weather threat tomorrow; much of the state is in an “enhanced risk” (level 3/5), which extends as far south as Jackson, Greenville, and Auburn. 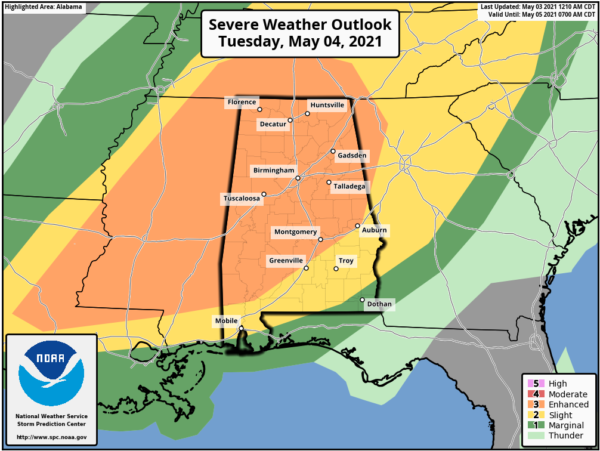 The air will become very unstable tomorrow afternoon across Alabama, and with an approaching upper trough and cold front numerous showers and storms will form by mid to late afternoon, continuing tomorrow night. These storms will be capable of producing large hail, damaging winds, and a few tornadoes. The main window for severe thunderstorms tomorrow will come from roughly 3:00 p.m. until 11:00 p.m.

Rain amounts between now and late tomorrow night will be in the 2-3 inch range for much of the state… a few isolated flooding issues could develop where heavier thunderstorms develop.

WEDNESDAY THROUGH FRIDAY: Lingering showers should end early in the day Wednesday, followed by afternoon clearing as drier air returns. The weather should remain dry for most of Alabama through Friday with highs in the low to mid 70s.

THE ALABAMA WEEKEND: Saturday will be dry and pleasant… with a good supply of sunshine the high will be close to 80. Clouds increase Sunday, and we will bring in a chance of showers and thunderstorms by afternoon. Sunday’s high will be in the low 80s.

NEXT WEEK: A stalled surface front will keep a chance of rain or thunderstorms in the forecast Monday and Tuesday, followed by trend toward drier weather over the latter half of the week. See the Weather Xtreme video for maps, graphics, and more details. 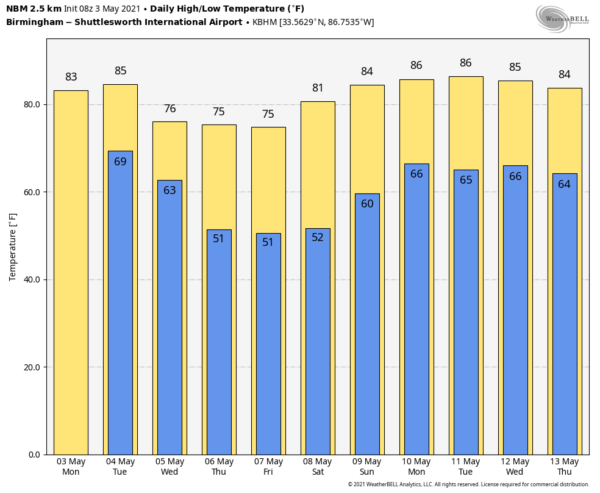 ON THIS DATE IN 1999: There were 63 tornadoes in Oklahoma, making this the worst outbreak ever to strike the state. In Central Oklahoma alone, eight individual supercell thunderstorms produced 57 tornadoes. Bridge Creek, Moore and southern parts of the Oklahoma City Metro area were hit the hardest. When it was near Moore, Oklahoma, a truck-mounted Doppler radar measured a wind speed of 318 mph, the highest ever observed in a tornado. Forecasters at the Storm Prediction Center in Norman, OK were faced with the unprecedented situation of a major tornado on the ground threatening their location. As a major F5 tornado was approaching the Oklahoma City metro area from the southwest, the SPC notified its backup, the Air Force Weather Agency at Offutt AFB in Omaha, Nebraska that they might have to assume operational responsibility if the tornado approached Norman. The storm remained several miles west of the facility but was visible from the SPC roof. Damage from this single tornado was around one billion dollars, making it the most costly tornado in history.