MOSTLY DRY TODAY: We will forecast a mix of sun and clouds across Alabama today with a high around 70 degrees. A few sprinkles are possible across the Tennessee Valley of North Alabama, but most of the state will be dry.

To the west, an organized MCS (Mesoscale Convective System) will form this afternoon and tonight… that will roll into Alabama late tonight after midnight.

SATURDAY’S SEVERE WEATHER THREAT: We will have two rounds of thunderstorms across Alabama tomorrow, and those storms could be strong to severe. SPC has most of Alabama south of the Tennessee River in a “slight risk” (level 2/5) of severe thunderstorms tomorrow… there is a “marginal risk” (level 1/5) for the far northern part of the state. 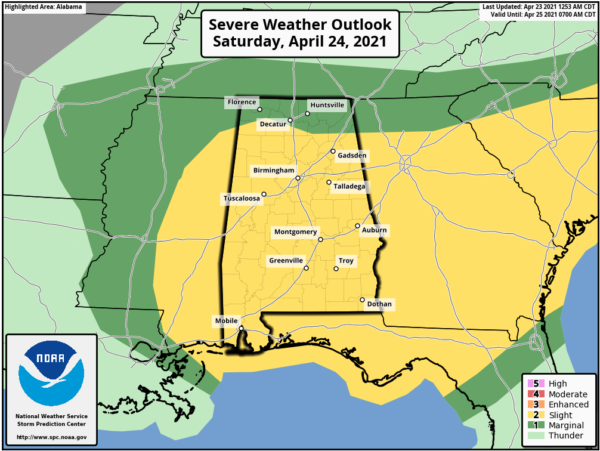 ROUND ONE: A widespread area of rain and thunderstorms will move through the state from about midnight tonight through 10:00 a.m. tomorrow. The rain could be heavy at times, and some flooding is possible. In addition, heavier thunderstorms will be capable of producing strong winds and some hail. An isolated tornado or two is possible, mainly over the southern half of the state where there will be some surface based instability. There will most likely be a lull in the activity by late morning as the mass of storms moves east of the state.

ROUND TWO: The air becomes very unstable by afternoon… we might even see some sunshine breaking through the clouds. But, additional showers and storms will likely form in this environment ahead of a cold front, and they could be strong to severe. The greatest concern with the afternoon activity will be large hail due to cold air aloft and strong updrafts within the thunderstorms. In addition, storms tomorrow afternoon could produce strong straight line winds. We don’t expect a tornado threat since wind profiles become unidirectional.

As always, be sure you can hear severe weather warnings if they are needed, and pay attention to severe thunderstorm warnings.

Storms should end over the northern half of the state by 6:00 p.m… and over South Alabama by midnight. The sky will clear tomorrow night as dry air returns to the state. Sunday will be a nice day, with ample sunshine along with highs in the mid 70s.

NEXT WEEK: Monday and Tuesday will be warm and dry with a good supply of sunshine both days… the high Monday will be close to 80, followed by mid 80s Tuesday. Showers and storms return in the Wednesday-Thursday time frame; there could be some risk of strong to severe thunderstorms with this system, but it is too early to be specific. See the Weather Xtreme video for maps, graphics, and more details. 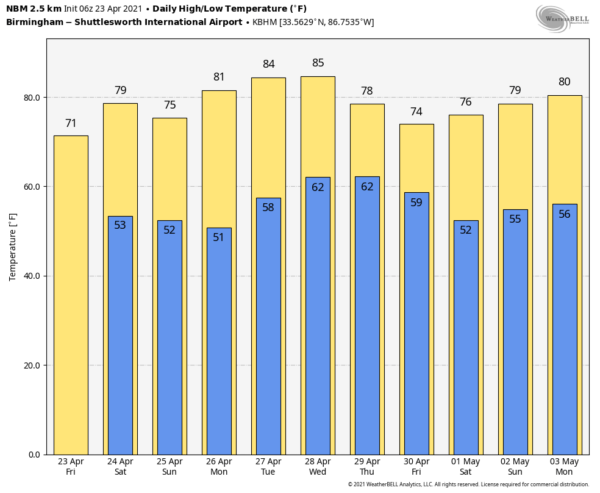 FOOTBALL WEATHER: Jacksonville State will host Davidson tomorrow at 1:00 p.m. in the first round of the FCS playoffs. A passing shower or storm likely during the game; storms in the area could be strong to severe with large hail being the main threat. Temperatures will be in the low 70s.

RACE WEEKEND: Rain and thunderstorms are likely at the Talladega Superspeedway tomorrow morning. There will be a break in the rain during the midday hours, but more storms will develop during the afternoon. Sunday will be a dry, pleasant day for running of the Geico 500 with a high in the mid 70s.

ON THIS DATE IN 1999: a horrific hailstorm moved southeast from Pennsylvania across Garrett County, Maryland and into the Eastern Panhandle of West Virginia. It had weakened some as it crossed Garrett County and the Allegany Front, but as it passed east of Keyser, West Virginia, hail began to increase in size once again. By the time it reached Capon Bridge in eastern Hampshire County, West Virginia, the size of the hail had grown from golf balls to baseballs. As it moved into Frederick County, VA, the hail storm continued to grow dropping golf ball size hail in a swath now reaching from the north of Winchester, south to Stephen City (about 10 miles).