BLUE SKY: The sky is clear all across Alabama this afternoon with temperatures mostly in the mid to upper 60s… the average high for Birmingham on March 29 is 70. Tonight will be clear and cool with a low in the 40s.

Clouds will increase tomorrow with a warmer afternoon… temperatures will reach the upper 70s in most places. A few showers are possible across Alabama tomorrow night ahead of a cold front.

That front will bring a band of showers and thunderstorms Wednesday; SPC maintains a “marginal risk” (level 1/5) for most of the state. 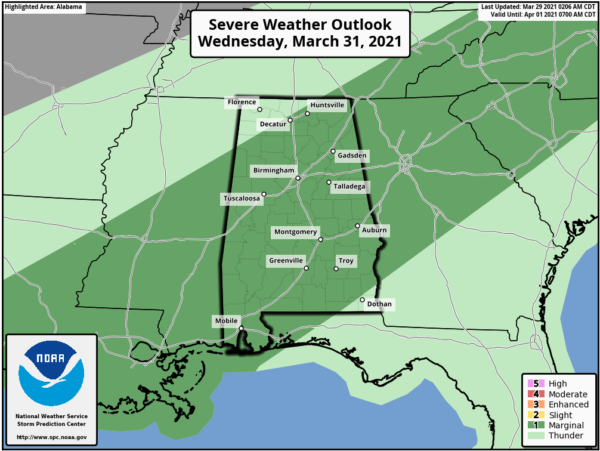 Thunderstorms on Wednesday will be capable of producing hail and strong, gusty winds. The chance of a tornado is low, but not zero. The main line of storms will enter Northwest Alabama around 7am Wednesday…. it should be around I-59 (Tuscaloosa/Birmingham/Anniston) around 1:00 p.m.. and near Montgomery by 4:00 p.m. Rain amounts of around one inch can be expected.

SUB-FREEZING MORNINGS AHEAD: The sky will clear Wednesday night as drier, colder air rolls into the state. Thursday will be sunny with a cold morning… we will be around freezing to start the day, followed by a high in the mid to upper 50s. The coldest morning will come early Friday when temperatures drop into the 25-32 degree range over the northern half of the state. Some frost is likely down into South Alabama. The day Friday will be sunny with a high in the upper 50s.

The weekend will stay dry with sunny days, fair nights, and a warming trend. We reach the 65-70 degree range Saturday, followed by low 70s Sunday.

NEXT WEEK: The warming trend continues… a good chance we rise into the low 80s by Wednesday. The first half of the week will be dry… showers and storms return late Thursday into Friday. See the Weather Xtreme video for maps, graphics, and more details. 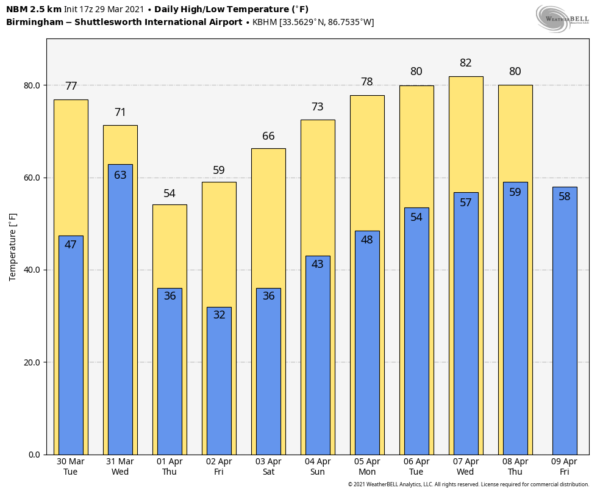 THURSDAY’S TORNADOES: NWS Birmingham has identified ten tornadoes from last Thursday’s severe weather event, including an EF-3 that was down for 50.36 miles from near West Blocton in Bibb County to Camp Winnataska in St. Clair County. This is the one that produced extensive damage in places like Helena, Pelham, Eagle Point, and Shoal Creek. The Ohatchee-Wellington tornado in Calhoun County was rated EF-2; it was on the ground for 24 miles and was responsible for five fatalities.

ON THIS DATE IN 1942: A slow-moving low-pressure system brought 11.5 inches of snow to the nation’s capital on March 29, 1942. It still stands as the highest March snowfall on record in Washington, D.C. on a single calendar day. Also, Baltimore, Maryland recorded an imposing total of 21.9 inches of snow on the same day. On the flip side, eight days later, the temperature in D.C. soared to 92 degrees on April 6, 1942, and it remains the highest temperature on record for April 6.