COMPLEX PATTERN THROUGH EARLY NEXT WEEK: A complex winter pattern continues for the southern U.S. through early next week, with the polar vortex over Canada, and an active southern branch of the jet stream below it. Bitterly cold Arctic air persists over the northern half of the U.S… Dickinson, ND reports -20F at 5:00 a.m. with a wind chill index of -39F.

But, for Alabama today that cold air stays just to the north, and we expect a high between 65 and 70 degrees this afternoon with a mix of sun and clouds. Most of the state will be dry, although a few isolated showers are possible over the southern counties.

RAIN RETURNS: Rain becomes widespread across Alabama tomorrow ahead of the Arctic front over Tennessee. Some thunder is possible, but severe storms are not forecast as the better shear values are in the cold air north of the front. Some lingering rain is possible tomorrow night and Friday, especially over the southern 2/3 of the state. The high tomorrow will be in the low 60s, but Friday will be colder with temperatures in the upper 30s over the Tennessee Valley, 40s for North/Central Alabama, and 50s to the south.

TO THE NORTH: An ice storm warning is in effect for parts of Arkansas, West Tennessee, and much of Kentucky as freezing rain is expected to bring a coating of ice that will create major travel impact and possible power outages. 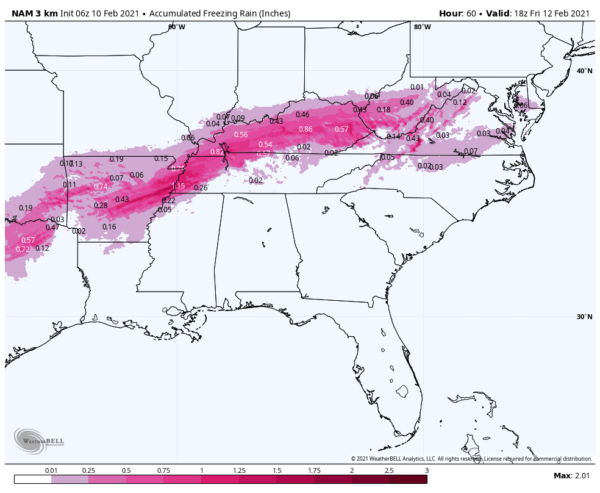 THE ALABAMA WEEKEND: It will be close call when it comes freezing rain potential over far North Alabama Saturday morning. It is not totally out of the question, but for now we will side with the warmer thermal values from the European global model, and it looks like most all of the state will just see a cold rain at times with temperatures in the 30s and 40s. Sunday looks cold and dry with some sun possible; most communities across North/Central Alabama will see a high in the 40s as the really cold air remains parked just north of here.

The bottom line is that for now we are not expecting any ice issues for Alabama through the weekend, but as noted this is a complex pattern and the forecast is always subject to change.

NEXT WEEK: The next wave brings more precipitation to Alabama Monday night into early Tuesday. Again, this will be a very close call for freezing rain, but at the moment it looks like mostly a cold rain for our state. And, yet another wave arrives Thursday and Thursday night… simply too early to make a call on that one. See the Weather Xtreme video for maps, graphics, and more details.

ON THIS DATE IN 1973: While North Alabama was dry, a major snow event unfolded for the southern half of the state, especially the southeast counties. Parts of Southeast Alabama had one foot of snow… even Mobile had accumulating snow. Parts of Georgia and South Carolina had almost two feet.

ON THIS DATE IN 1981: A morning tornado at Bay Minette struck the local middle school. The school’s gymnasium was severely damaged, and 62 people were hurt, 44 of which were students.

WEATHER BRAINS: Don’t forget you can listen to our weekly 90 minute show anytime on your favorite podcast app. This is the show all about weather featuring many familiar voices, including our meteorologists here at ABC 33/40.n