The calendar has turned to March and the start of meteorological spring (which was March 1, a convenient day for weather peeps to divide the calendar for calculation purposes) is clearly apparent as a cold end to February (remember than thunder-sleet last week?) quickly melted away under the warm sunshine! We’ve got more of this to come in the next few days, but is it here to stay?

Rest of the work week

Let’s start with the short-term, which is a continuation of the past couple of glorious days, despite a weak cool front moving in on Thursday. That front will be dry – and to be perfectly honest, cloud-free – and have little effect on the temperatures. Overnight lows will continue to moderate as dewpoints slowly creep up. Look for mid 40s Thursday morning and mid 70s in the afternoon with light wind shifting to the north. Thursday night will be a few degrees warmer, thanks mainly to the arrival of some high clouds late in the night. Those high clouds will partially filter the sunshine on Friday and are a harbinger of things to come. However, it will still be warm and dry to end the week as high pressure rebuilds to our east, bringing back the south wind.

Those clouds on Friday will thicken heading into the weekend. Dewpoints continue to rise as southerly flow becomes deeply established Saturday. Wind gusts could top 30 mph and a few stray showers are possible towards the end of the day as a cold front approaches. Look for temps to again reach well into the 70s after only bottoming out in the mid 50s Saturday morning.

It looks like showers will become more scattered Saturday night with very mild conditions – 60s all night long. As the front gets much closer to the region Sunday, we’ll definitely see an uptick in rain chances. In fact, with dewpoints likely near 60 degrees and a front not far off, scattered thunderstorms are also looking like a decent bet. If you need some outdoor time this weekend to spring clean, Saturday is your best choice, though don’t overlook that wind. We’ll border on #SkirtAlert criteria and the Trash Can Meter will be well into the “Can done turnt over” range!

The cold front will move into the Mid-South Sunday overnight, so expect higher chances of thunderstorms, heavy rain, and potentially a few strong storms with very warm temperatures. The Storm Prediction Center has issued a Slight Risk of severe storms for Sunday night over AR right up to the Memphis metro. Worth watching, but not overly concerning at this point.

Start of next week

The cold front is currently forecast to move through the Memphis area by both the American and European models on Monday morning. That could still obviously change, but for now, that’s our best guess. It will likely be accompanied by thunderstorms, a few of which could be strong given the energetic wind field and favorable moisture profile. The main question mark lies in the degree of instability, which is always a question this time of year it seems. The timing of the front (morning) favors lower storm fuel. If it were to be delayed and we got to the 70s again Monday for instance, I’d be a bit more concerned.

Once the front moves through, rain looks to stick around Monday with a bit cooler temperatures. We cold see temperatures dropping from the 60s in the morning to the 50s in the afternoon. Behind the front, a cooler airmass moves in, but compared to late February, it will be manageable. Look for partly sunny skies Tuesday and Wednesday and highs in the 50s with lows dipping into the 30s. The overall pattern still favors slightly wetter than average for next week, so I’m not convinced rain chances don’t return by mid to late next week.

What season are we in? 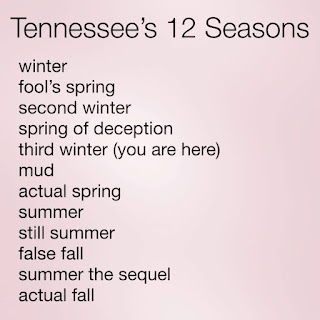 So are we done with winter? On the above (very accurate, tbh) list, I’d put this week of 70s at “spring of deception.” I guess it depends on how you define winter. I do think we’ve probably seen the last of our chances of impactful winter weather (thank goodness!). That doesn’t mean we can’t see a quick shot of winter shenanigans mixing in behind a potent cold front for another couple weeks, but it’s doubtful. Freezing temperatures behind us? We’re likely not quite there yet.

The average date in the city for the last freeze in the spring is March 18 – still more than two weeks away. It’s later than that in outlying areas, and that is just the average. We certainly have had some very cold mornings around Easter before, even when it falls in early April. I would not start going crazy with spring planting yet, but in a couple of weeks, we should be getting close!

—-
Follow MWN on Facebook and Twitter for routine updates and the latest info!
Complete MWN Forecast: MemphisWeather.net on the mobile web or via the MWN mobile app
Download our free iPhone or Android apps, featuring SW+ Alerts severe weather notifications!