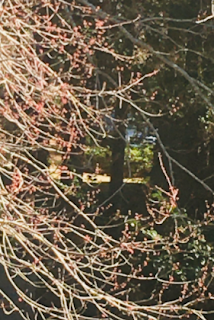 Those little red dots on the maple tree…

…is Spring peaking through!

2 days ago they weren’t there.

Now they are growing fast.

Actually check the  maps below out.

Not much snow anywhere. 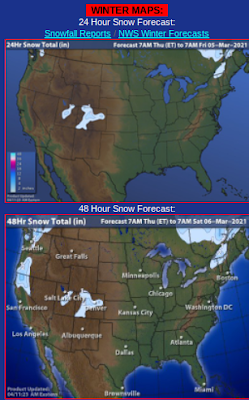 Mike does winter too…

..but soon he will be oh so tropical.

As for me in Raleigh….

A possible chance of wicked weather …

Mike is watching from Tampa…

… models paint a bullseye there today! 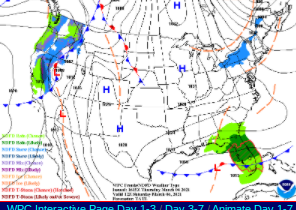 What the models give they also take away!

As for the Hurricane Season I really don’t want to go there yet. Trying to talk tropical in March is like screaming into the wind except for with those totally tropically obsessed. March Madness is the topic in the Carolinas and a good part of the world that was deprived of their favorite sports addiction last year by Covid and currently it looks as if this might happen one way or the other. Brackets are bigger right now than tropical speculation. As for the NHC wanting to change the date of the Hurricane Season possibly to sometime in May, I will talk on this later. I do agree with something Rob has said from www.crownweather.com on his emails he sends out to his subscribers, he’s very chatty on the subject so if you are interested get a subscription from him he is well worth it and during hurricane season he goes into great detail on different areas not usually mentioned by many online who talk this model vs that model; he does talk models but he’s way better than your average model chaser there is nothing average about him. He’s good and yes I agree in ways, except to say people like dates so they can gear up their coverage and get good ratings by hyping the coming Hurricane Season but in reality hurricanes happen often many times before June and after November and they have for years. Christopher Columbus who knew weather as it relates to his voyages that were timed carefully complained that he experienced a tropical system in I believe February. Google it, it’s true though tropical like systems form but are not named because it’s too early or too late so treated as a regular Coastal Low often.

These days the NHC seems hot to trot on naming anything that spins, so it’s only logical they would expand their coverage beyond the old fashioned deadlines. Time will tell. I’ll talk on it another day.

Today I’m knee deep in chores on my to do list and not much going on weather wise in my world. But I’ll leave some information below with a link to a good site you may want to save. My local “Spectrum News” did a segment on sharks off the Carolina coast and put this site up to show the location of shark sightings. In truth this is common especially in years when the water warms up early and I watch it to watch what the water temperatures are and what the patterns are and of course what might happen early this coming hurricane season. I also love going to Myrtle Beach where I watch the sunrise, walk on the beach, sometimes find a shark tooth and then go watch the sun set over Broadway at the Beach’s lagoon. Hope to go there soon! 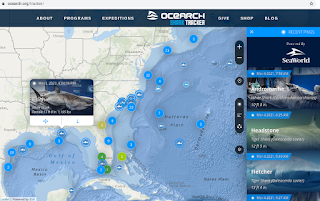 A good site shown above and linked to below is about tracking sharks or perhaps it’s a useful site depending on how much you are at your local beach or you just find sharks fascinating or are bored with a lack of snow storms or hurricanes to track. Note how many sharks there are currently off the Carolina coastline and yes you can click on the number and it tells you the type of shark that’s touring your beaches; if you have never been to Myrtle Beach or the beaches nearby you don’t know the joy of searching the shoreline for shark teeth. It’s a thing there and I’ve picked up several myself that I keep in a little box but I promised one to a little guy so next trip down to Miami I must remember to take one with me! For now I’m dreaming of Myrtle Beach which has somehow become my local MB vs the one down in Florida. Actually my favorite beach is the southern end of Pawley’s Island that has inched it’s way above a few beaches down in the Florida Keys. Happy Shark Hunting!

You’d dream of Myrtle Beach too if you knew it the way I do! Check out the images below of both the sunrise and a hand full of shark teeth and you will find there’s more to do there than simply golf! By the way it’s not easy to find a hand worth of teeth, but you never know. Those people stooped over ignoring the waves and the sky are looking for shark teeth, trust me it becomes more obsessive than looking for shells! 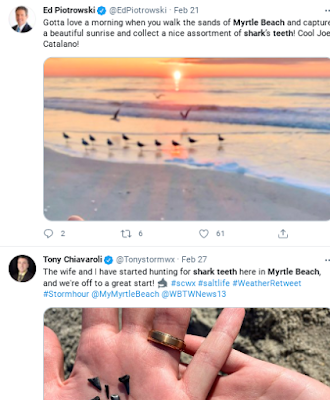 ..or just enjoy the sunrise!

Ps I warn you it’s not easy to find them.

Make sure u go to Margaritaville and get a drink …

…and watch the sunset!

Oh and there’s always a hurricane at Margaritaville.

You can drink one or watch one 😉