**No afternoon Weather Xtreme video today; I am on the road to a weather conference at Mississippi State University**

SEVERE CLEAR: The sky is sunny across Alabama this afternoon with temperatures generally in the 60s. Tonight will be clear and cold for early April with a low between 35 and 45 degrees for most communities.

STORMS RETURN: The next weather system will bring rain and thunderstorms to the state Tuesday and Tuesday night. Global models continue to suggest this feature will have strong wind fields and a pretty decent amount of surface based instability, meaning we will have some risk of strong to severe thunderstorms. SPC has parts of Alabama in a severe weather threat in their “Day 5” outlook, mainly from Birmingham south and west… but this will likely be expanded to cover much of the state in future outlooks. It looks like a situation where damaging winds and a few tornadoes will be possible, but it is still too early to be really specific on the magnitude of the threat, or the timing.

Then, on Wednesday, a cold front will sweep through the state, bringing the threat of a line of storms with strong gusty winds. SPC has much of the state in a severe weather threat in their (Day 6) outlook for this event. Rain amounts will be in the 2-3 inch range for most of the state Tuesday and Wednesday, and some flooding problems could develop. 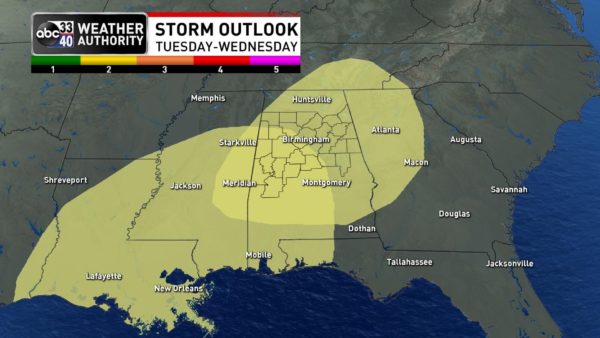 Drier air air returns Thursday, and temperatures will likely be well below average by Friday and Saturday (April 8/9). We could have the potential for a late season frost/freeze threat by Saturday morning April 9. 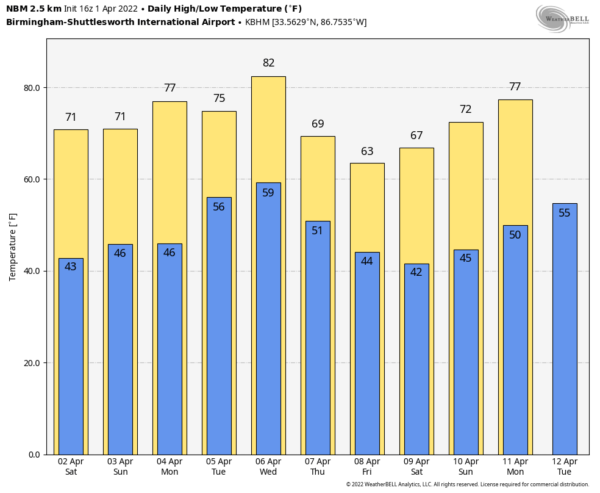 ON THIS DATE IN 1960: The first weather satellite, TIROS 1 (Television and Infra-Red Observation Satellite) began sending pictures back to Earth. The TIROS series would have little benefit to operational weather forecasters because the image quality was low and inconsistent. The most critical understanding achieved from the new technology was the discovery of the high degree of organization of large-scale weather systems, a fact never apparent from ground and aircraft observations

ON THIS DATE IN 1981: A high end F3 tornado tore through Hurtsboro, in Russell County, killing 2 people and injuring 23. The tornado devastated Hurtsboro’s business district and much of the residential area. Eight of the injured were admitted to the hospitals. Damage was estimated at $8.5 million will about 80 percent of the property in the city damaged or destroyed. Twenty-five homes, 8 mobile homes and 25 businesses were destroyed.