A sea of moisture.

A tropical stream of moisture.

She crossed over at the exact best spot.

…and kept on going!

What other records does she want to break? 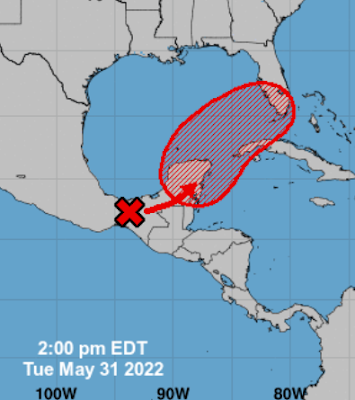 Things to consider regarding the red suspect area of development, current at 70% chances, that will most likely develop at least into a Tropical Depression and possibly TS Alex. X Agatha is easy to find, to her NE there is another mid level sort of circle over the Yucatan. 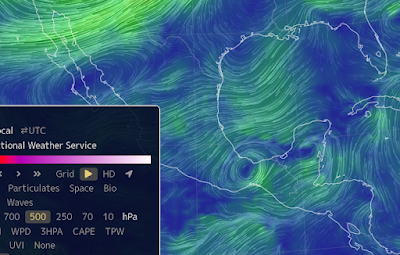 This image shows the 2 areas well. 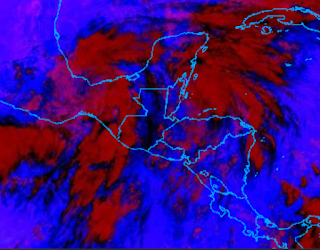 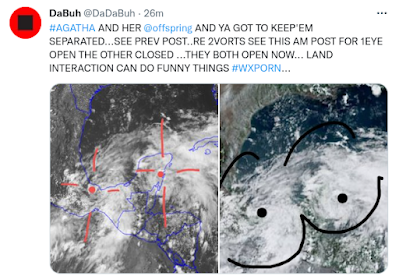 Dabuh has a way with words and um images…..

…we’ve discussed this all day online.

Things to consider now and always!

1. You need a center of circulation for a cyclone to form. Think of it this way. You know you have those days where you are all over the place, start 3 projects, don’t get any finished and you feel stressed and annoyed and that makes it even messier. Currently X-Agatha mingling and competing with another area I have pointed out today often online.

2. Models way before a system has formed a center spit out different solutions that we try to make sense of and in this case it’s kind of clear what the problem is. The EURO catches one “center” closer to where Agatha emerges and the track it takes is further to the North crossing Florida at Rush Hour on the Beeline Expressway from Tampa to Daytona. The GFS may be latching on to the smaller vort to the right that has been there for a while (consistency is everything) seen easily in Dabuh’s Weather Porn.  No I don’t think he’s making Tee Shirts with that image……..see Mike for Tee Shirts.

3. Water temperature is everything and can make or break a developing cyclone. It can crawl along, coughing as if it’s out of gas or it can ramp up suddenly like a sexy red sport car if it travels over the Loop Current.  This year’s Loop Current is especially troublesome and one reason we do believe that combined with a strong La Nina that favors a very busy Hurricane Season in the Atlantic that we are a bit more concerned than usual for most of the cities around the Loop Current … Florida and Gulf of Mexico. And, what forms near Florida and travels across the Loop Current doesn’t stay in Florida, case in point being Hurricane Katrina. With regard to this little piggy…. IF it takes a track over the Loop Current (more like the EURO was suggesting) it would be stronger. Further South and East it would be weaker as the GFS suggested. Recently, the EURO decided to perhaps consider what the GFS has been selling and after possibly seeing the Dabuh’s graphics it may have had a second thought. But again … LOCATION matters. The formation of the center is the location the better models will run off of and give us better data. When the models begin to finally agree, and they will, then we will have a Cone and a solid idea where it’s going. Til then some of us are laying low resting… such as Mike 🙂 immortalized now in this image. 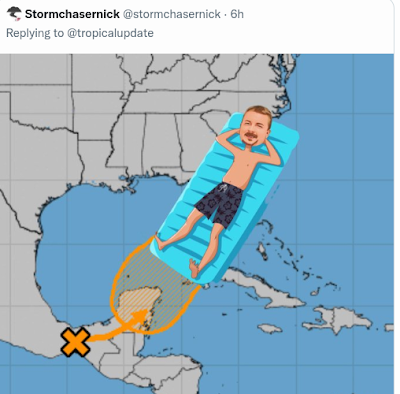 NOW THAT’S A CONE TO REMEMBER!!

4. Rule 4 is “Garbage in … Garbage out” and any computer programmer will tell you that as well as possibly try printing out their own tee shirt of Dabuh’s masterpiece with little Xs and Ox. Babyboomers will definitely understand that, sorry Millenials…

5. Shear…. This actually links to timing, as shear changes in real time so once this forms we have to see if shear is light (enhancing development) or strong (inhibiting development).

6. Wild Cards ..such as MJO that most everyone loves to talk about except for Jim Williams who is not a fan.

7. SAL. SAL moves the same way and same direction tropical waves move. Currently there is an opening, a window of opportunity for development. Where SAL goes  provides a clue where the waves will also go and when there’s an opening… as SAL begins to lose it’s grip on the tropics… that’s where the big Westbound African Waves will go … usually. 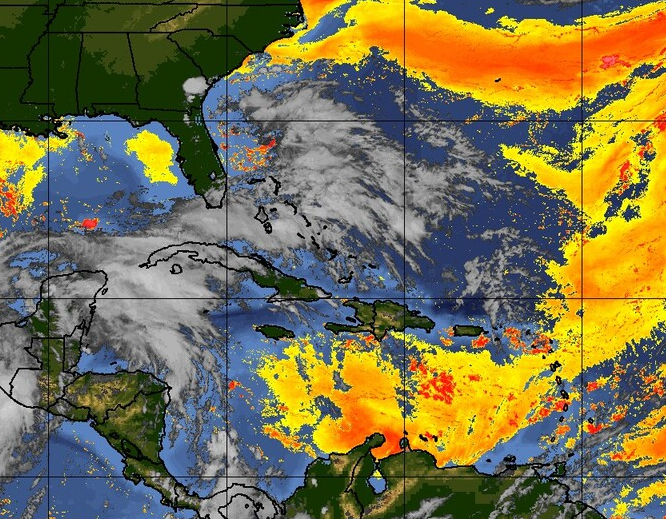 8.  It’s frustrating that we cannot be exact at this point as much of South Florida has been swamped with flooding rains daily and it needs another 8 to 10 inches of rain from a Tropical Depression or TS like a hole in the head to quote an old saying. When it rains it pours and this is the Rainy Season, Monsoon Season in South Florida . The forecast for the next 7 days shows South Florida swamped with heavy rain and it may end up looking much like the swamp that it is so don’t say I didn’t warn ya. Yes I said swamped twice because I cannot emphasize the problem enough.  Welcome to Florida to all the New Yorkers who recently moved there. 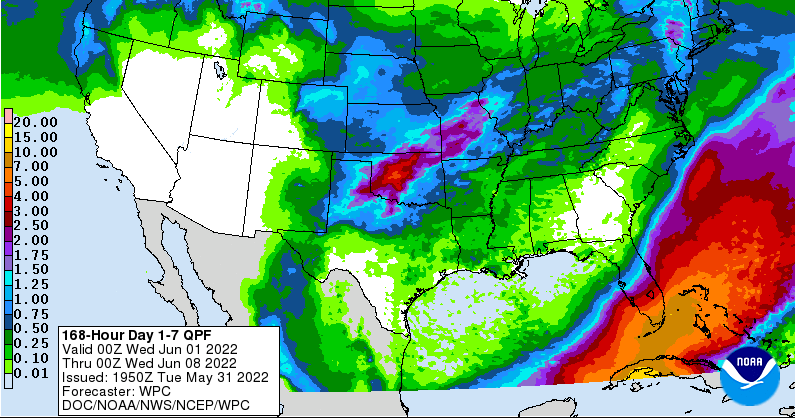 Looks a bit like a Red Moby Dick doesn’t it?

On a personal level I’ve sort of resolved my Gmail issues (thanks for the prayers) and I’m currently lying in the bed under the fan typing on my laptop trying to hide from the heat and trying to plot my escape from Raleigh where it  is forecast to be way too hot all week. Doubt I’ll leave but I’m kind of in a pretend vacation state of mind.  I told my husband to pick up dinner and surprise me! I’ll provide the drinks 😉

Much love, prayers for patience as I do believe the 2022 Hurricane Season is going to have way too many hurricanes and tricks up it’s sleeve so order Happy Campers (herbal pills from Health Food Store)  or stock up the ice chest with your favorite beer and continue to figure out how to deal with Hurricane Season being Hurricane Strong and prepared. If you were a scout you’d know that… no badges here, no tee shirts just a song or two to lighten the mood. Oh speaking of ice… Mike has a deal with 30% for generators from one of his sponsors. No more ice when the power goes out …

South Florida most likely will deal with SOMETHING a bit more tropical than just the regular May Monsoons sooner rather than later.