RADAR CHECK: It is a cold, windy day across Alabama with numerous showers moving northward ahead of a deep, cold core upper low pushing into the state from the west. Temperatures are in the 40s, and some small hail has been observed with the showers today due to the cold air aloft.

Dynamic cooling associated with the upper low will likely change the rain over to snow across far North Alabama tonight, generally north of U.S. 278 (north of a line from Hamilton to Cullman to Gadsden). Some light accumulation is likely where heavier snow showers develop; grassy areas could get white. But, major impacts are not expected due to a relatively warm ground, and surface temperatures just above freezing. A few isolated slick spots on bridges can’t be totally ruled out, however. 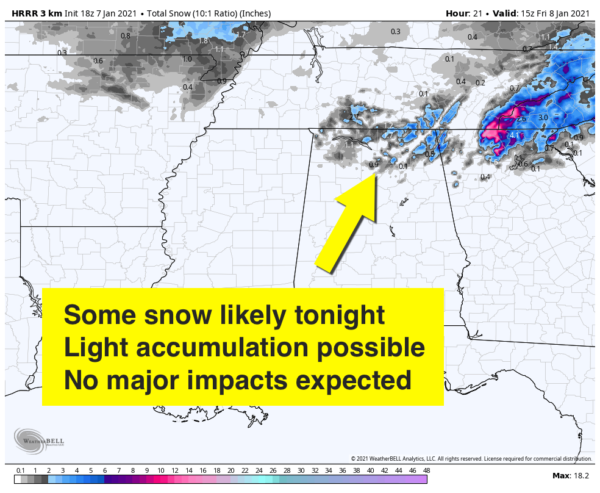 Some lingering drizzle, or a few snow flurries, are possible over North Alabama tomorrow morning, otherwise the day tomorrow will be mostly cloudy and cold with a high between 40 and 45 degrees… communities up in the Tennessee Valley will likely hold in the 30s all day.

THE ALABAMA WEEKEND: The weather will be dry and cold Saturday and Sunday; partly sunny days, mostly fair nights. Highs in the 45-50 degree range, with lows in the mid to upper 20s.

MONDAY: The next system comes along in this active winter pattern, and it has potential to bring winter weather problems to parts of the Deep South. For now, using global model ensemble output, the best chance of accumulating snow in Alabama seems to be over the far northern and western counties. Parts of Mississippi and Tennessee will likely have a chance of snow as well, but it remains too early for a specific forecast. Most of Alabama, however, will have a cold rain. 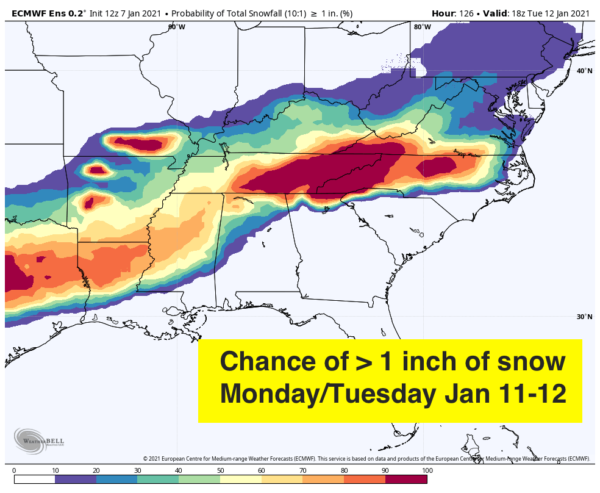 The rest of the week looks dry with a slow warming trend; temperatures reach the 50s over the latter half of the week. See the Weather Xtreme video for maps, graphics, and more details.

ON THIS DATE IN 1988: A low pressure system developed over the northwestern Gulf of Mexico and moved across the northern Gulf over the next few days. Moisture spread over a shallow cold air mass bringing an historic winter storm to North Alabama. Huntsville’s total of 9.6? inches of snow was the second-highest snowfall on record at the time.

ON THIS DATE IN 1989: Empty foundations are all that remain of four homes on the southwest end of Allendale, Illinois, after an F4 tornado ripped through. The tornado was extremely rare due to its strength and the fact that it occurred so far north during the middle of meteorological winter.