WET AT TIMES: A disturbance will bring some rain to Alabama over the next 48 hours. While a few sprinkles are possible today, most of the daytime hours will be dry… clouds will increase with a high in the upper 60s. Rain is likely at times tonight and tomorrow morning; heaviest rain will come over Southwest Alabama where a flash flood watch remains in effect for Mobile and Washington counties. A few strong storms are possible there as well.

But, for the northern half of Alabama, rain amounts will be light, generally under a quarter of an inch. And, for North/Central Alabama most of the light rain will be over by noon tomorrow. There will be some potential for rain late tomorrow and tomorrow night over the southern third of the state.

Tomorrow will be cloudy and cool with a high only in the 62-66 degree range… the average high for Birmingham on April 17 is 76. Sunday will be drier as the sky becomes partly sunny. Temperatures remain below average with a high in the upper 60s.

NEXT WEEK: The weather looks quiet for much of the week. A cold front will pass through Tuesday night in mostly dry fashion, although it might squeeze out a few raindrops over the Tennessee Valley of far North Alabama. Very cool air late April will drop into Alabama Wednesday… temperatures will struggle to get out of the 50s over the northern third of the state.

Thursday morning will be cold; most communities will see a low between 38 and 42 degrees, but for some of the colder valleys mid 30s are possible with a touch of light frost. A warming trend begins Thursday afternoon, and the next chance of rain will come late Friday or Saturday (April 23-24). See the Weather Xtreme video for maps, graphics, and more details. 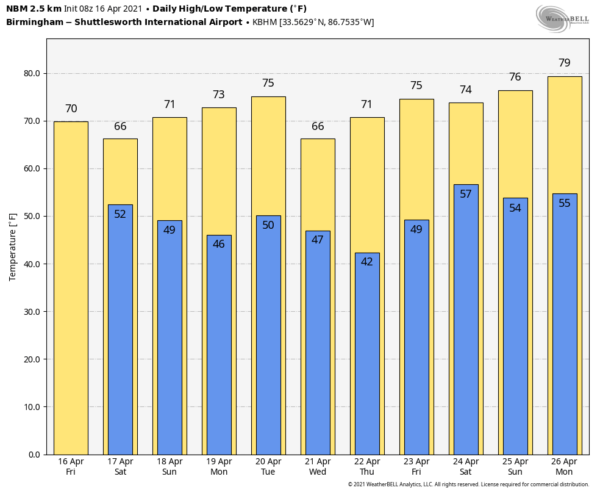 ON THIS DATE IN 1851: “The Lighthouse Storm” of 1851 struck New England on this date. Heavy gales and high seas pounded the coasts of New Hampshire and eastern Massachusetts. The storm arrived at the time of a full moon, and high tide was producing unusually high storm tides. The storm was so named because it destroyed the lighthouse at Cohasset, Massachusetts. Two assistant lighthouse keepers were killed there when the structure was swept away by the storm tide.