SUNNY FRIDAY: Temperatures rebounded nicely across Alabama today; after lows in the 20s, we are seeing temperatures in the 50s this afternoon with a sunny sky. Tonight will be cold again with a fair sky; we drop into the 25-32 degree range early tomorrow.

THE WEEKEND: Clouds will increase across the state tomorrow, but the day will be dry with a high in the low to mid 50s. We expect periods of rain tomorrow night into Sunday morning as an upper trough passes through; rain amounts should be generally under 1/2 inch, and by Sunday afternoon the best chance of showers will shift into the southern half of the state. Sunday’s high will be in the upper 50s.

CHRISTMAS WEEK: The weather will be dry Monday through Wednesday with pleasant afternoons; highs will be in the 57-61 degree range. Clouds will increase Wednesday, and a cold front will bring rain to the state Wednesday night into Thursday morning. Much colder air rolls into the state Thursday; new model data suggests temperatures will fall into the 30s with a brisk north wind. And yes, there is some chance we could see some light snow or snow flurries in the cold air following the cold front Thursday, but for now accumulating snow seems unlikely. Then, Christmas Day will be dry but very cold; the low Friday morning will be in the 15-25 degree range, with a high around 40 degrees with a good supply of sunshine. 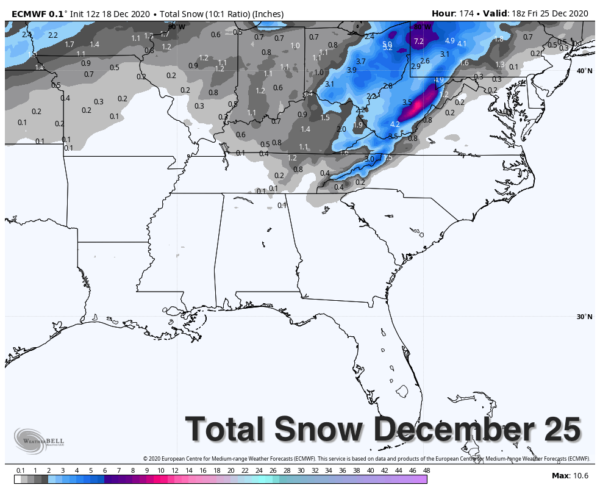 Look like this will be our coldest Christmas Day since 2010, when the high in Birmingham was 39. On December 25, temperatures in Birmingham have remained below 40 degrees only 11 times since 1900.

ON THIS DATE IN 1944: Typhoon Cobra, also known as the Typhoon of 1944 or Halsey’s Typhoon (named after Admiral William “Bull” Halsey), was the United States Navy designation for a tropical cyclone that struck the Task Force 38 in the during World War II in the Pacific. The typhoon was first observed on December 17 as it surprised a fleet of ships in the open waters of the western Pacific Ocean. Sustained winds associated with the storm were up to 100 mph with gusts to 140 mph. On December 18, the small but violent typhoon hit the Task Force while many of the ships were attempting to refuel. Due to the extreme seas and winds, three destroyers capsized and went down with practically all hands, while a cruiser, five aircraft carriers, and three destroyers suffered serious damage. Approximately 790 officers and men were lost or killed with another 80 injured.

Look for my next Weather Xtreme video here by 7:00 a.m. Monday… enjoy the weekend!