RADAR CHECK: Not much on radar across Alabama this afternoon; we are seeing more clouds than sun on satellite images and temperatures are in the mid 60s for most places, about ten degrees below average for April 16.

Rain will move into the state tonight… heaviest rain will fall over the southwest counties, where a flash flood watch is in effect for Mobile, Baldwin, and Washington counties. For the rest of the state, rain tonight will be light, with amounts generally under 1/4″.

THE ALABAMA WEEKEND: We will keep the chance of some rain going through tomorrow morning; the rain should end by midday for the northern 2/3 of the state. Rain could linger into tomorrow night over the southern counties… otherwise tomorrow will be cloudy and cool with a high only in the low to mid 60s. The sky becomes partly sunny Sunday as drier air creeps into the state; the high Sunday will be in the upper 60s.

NEXT WEEK: For now the week looks pretty quiet. A cold front could squeeze out a little light rain over the Tennessee Valley Tuesday night, and noticeably cooler air rolls into the state Wednesday following the frontal passage. Temperatures will drop into the low 40s early Thursday, and some of the traditionally colder spots could reach the mid 30s over the northern half of the state with some risk of scattered light frost. The next chance of rain will likely come around Saturday April 24… See the Weather Xtreme video for maps, graphics, and more details. 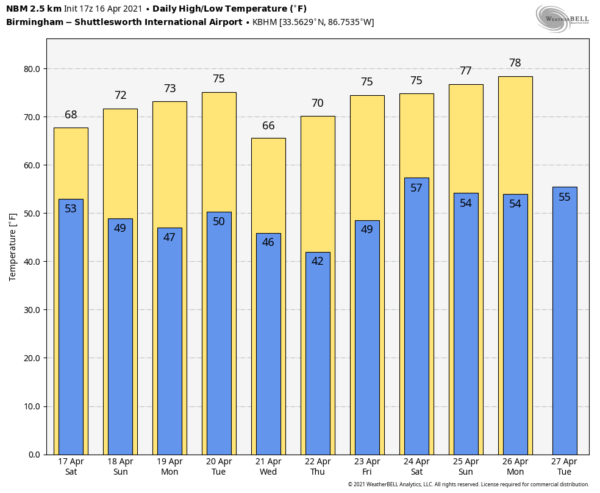 ON THIS DATE IN 1851: “The Lighthouse Storm” of 1851 struck New England on this date. Heavy gales and high seas pounded the coasts of New Hampshire and eastern Massachusetts. The storm arrived at the time of a full moon, and high tide was producing unusually high storm tides. The storm was so named because it destroyed the lighthouse at Cohasset, Massachusetts. Two assistant lighthouse keepers were killed there when the structure was swept away by the storm tide.

Look for my next Weather Xtreme video by 6:00 a.m. Monday… enjoy the weekend!