FREEZING FOG AGAIN: Again this morning “freezing fog” has formed over parts of North/Central Alabama… this is simply fog that forms with surface temperatures below freezing. It can lead to rime ice collecting on exposed surfaces, and can lead to slick spots on bridges and overpasses. A freezing fog advisory is in effect for areas along and north of I-59; temperatures will be above freezing by 8:30-9:00. 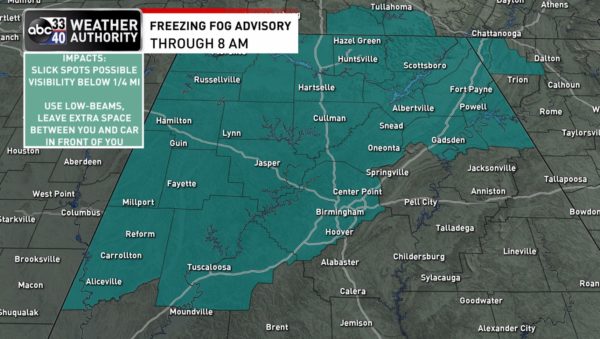 Look for a nice warm-up today… after the cold start we expect a high between 55 and 59 degrees this afternoon with a partly to mostly sunny sky. Clouds return quickly tonight, however, ahead of a cold front, and a few showers are possible as it moves through. Moisture will be limited, and rain amounts will be light and spotty.

TOMORROW AND THE WEEKEND: Colder air returns to the state. Look for a mix of sun and clouds each day; the high tomorrow will be in the upper 40s, followed by low to mid 40s Saturday. Then, on Sunday, the high will be close to 50 as a warming trend begins. The weather will be generally dry on these three days, although a few snow flurries are not out of the question for the northern quarter of the state tomorrow night into Saturday morning. No accumulation or impact is expected. Early morning lows over the weekend will be in the 28-32 degree range.

NEXT WEEK: Highs will be in the 50s most of the week; the weather looks dry Monday through Wednesday, but rain will likely return at some point Thursday or Friday as a storm system lifts out of the Southwest U.S. Remains to be seen how much rain we see, but it will be too warm for any winter weather mischief. See the Weather Xtreme video for maps, graphics, and more details.

GRAUPEL: Many communities saw graupel yesterday; some some it is a new term, but that precipitation type has been around forever. Graupel is a type of frozen precipitation that is also referred to as snow grains. It forms when snowflakes fall through a layer of supercooled water (water that remains liquid in a below-freezing environment), and those supercooled droplets coat the snowflakes with a layer of ice in a process known as riming. Graupel pellets are white, roundish, soft and spongy, and are easily crushed, bearing a resemblance to Dippin Dots.