While western Washington residents were amazed by the extreme weather of December 21, including snow, heavy rain, flooding, record temperatures and more, another extreme event struck the eastern slopes of the Cascades near Leavenworth, resulting in very strong winds, downed trees, and power outages for over a thousand customers.  The picture below provides a sample of the bedlam. The cause of the eastern Washington destruction? The same as in the west. A very strong cold front.

The eastern slopes of the Cascades have been the scene of extraordinarily powerful downslope windstorms on several occasions as strong westerly (from the west) flow accelerated down into the Columbia Basin.  A famous event occurred in 1974 when a number of train cars were derailed and fell into the Columbia River near Vantage. 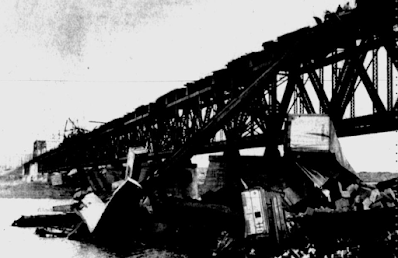 On Monday evening, strong winds from the west followed the passage of the powerful cold front, with a large pressure difference (gradient) developing over the Cascades (see surface weather map at sea level pressure, winds, and temperature). 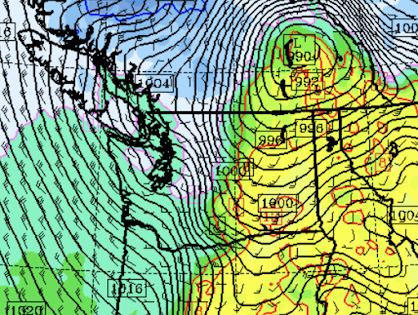 A map of observed maximum wind gusts on Monday around Leavenworth (red oval) on Monday shows a 52 mph gust just east of town, 79 mph at Alpental Summit, and 100 mph at Mission Ridge ski area.  Clearly, the observing network is not dense enough to spotlight all the strong wind areas. 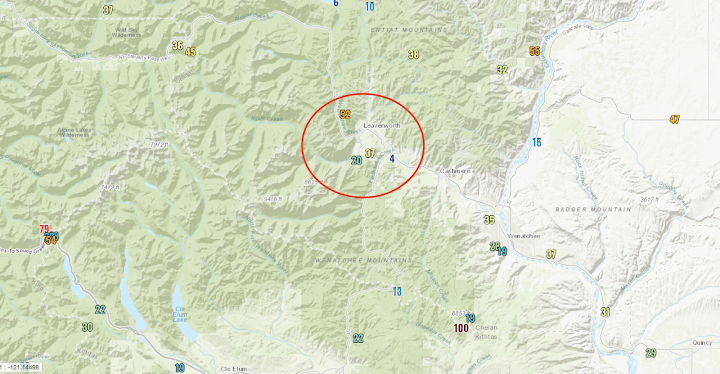 The Mission Ridge Summit (6730 ft) winds are shown in more detail below, with the shading indicating the range of winds at any time.  100 mph is evident, as is the extreme gustiness of the wind speeds.  Strongest winds were from the northwest (270 indicates winds from from the west). 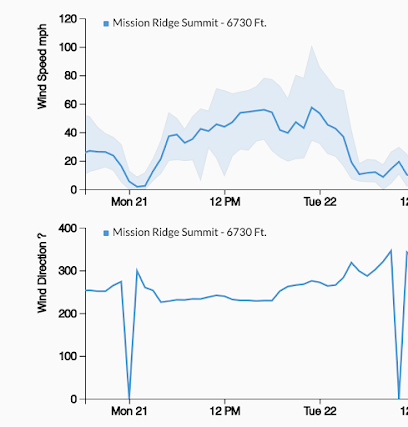 The UW high resolution model  maximum gust forecast (in knots) for 10 PM Monday shows how structured and localized the strong winds were. Powerful winds  (blue, orange and red colors).west of Leavenworth where the terrain descends downward quickly.  Since the graphics shown are from an 18-h forecast, it was clear that some warning could have been given.

You will also  notice a large area of strong winds near Vantage (blue colors) and mega winds around the summit of Mount Rainier.

The complex wind patterns around the Northwest make the meteorology challenging but our high-resolution models give us a powerful tool for providing localized warnings.