NICE WINTER AFTERNOON: With a partly sunny sky, temperatures are mostly in the 50s across Alabama this afternoon… a few spots in West Alabama have reached 60 degrees. Clouds will thicken across the state ahead of approaching storm system; tonight’s low will be in the mid to upper 30s.

Rain will move into West Alabama during the midday hours tomorrow, and that rain will be widespread across the state late in the day and tomorrow night. This will be a good soaking with totals of 1-2 inches likely. A few strong storms are possible near the Gulf Coast; SPC maintains a “marginal risk” (level 1/5) of severe thunderstorms along the Florida coast from Perdido Key to Sarasota.

SNOW POTENTIAL SUNDAY: The overall thinking for Sunday hasn’t changed. As colder air drops into Alabama, rain will change to light snow Sunday. The heaviest snow will most likely be north of Alabama over Tennessee, where a winter storm watch is in effect. Some light accumulation is possible across North Alabama, generally north of a line from Sulligent to Roanoke. Amounts will be generally under one inch on grassy areas… isolated heavier amounts are possible over the Tennessee Valley, and parts of Northeast Alabama (especially across higher terrain).

In fact, NWS Huntsville just issued a winter storm watch for Jackson and DeKalb counties in Northeast Alabama for potential of 1-3″ of snow there. 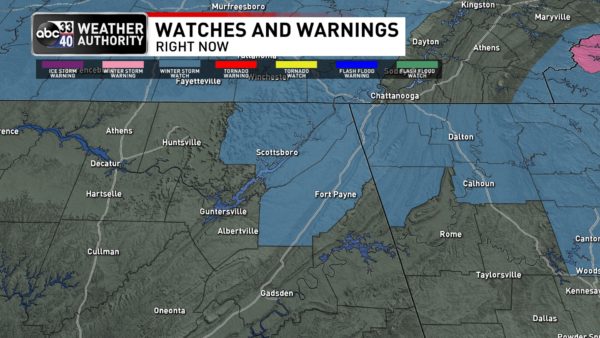 Temperatures are forecast to be above freezing Sunday afternoon (mid 30s) as the snow falls, and travel impact in Alabama isn’t expected as the roads will be just wet. However, some patchy “black ice” is possible on bridges Sunday night as temperatures drop below freezing and the sky clears. 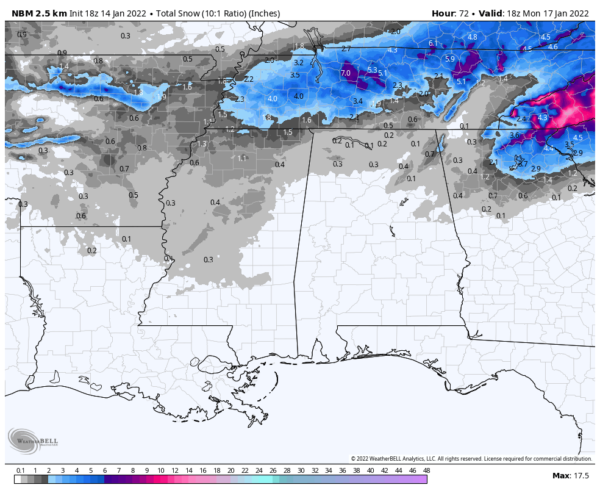 This system will be a high impact winter storm for parts of the Carolinas, Northeast Georgia, Virginia, and West Virginia where significant amounts of snow and ice are expected. Be aware of that if you are traveling.

And, of course, forecast changes are possible right up until the start of the event, so be watching for weather updates over the weekend.

NEXT WEEK: Look for dry weather Monday and Tuesday with a warming trend. A cold front will bring a chance of rain showers Wednesday afternoon and Wednesday night, then a shot of cold air rolls into the state Thursday and Friday. The pattern favors below average temperatures here for the rest of January… See the Weather Xtreme video for maps, graphics, and more details. 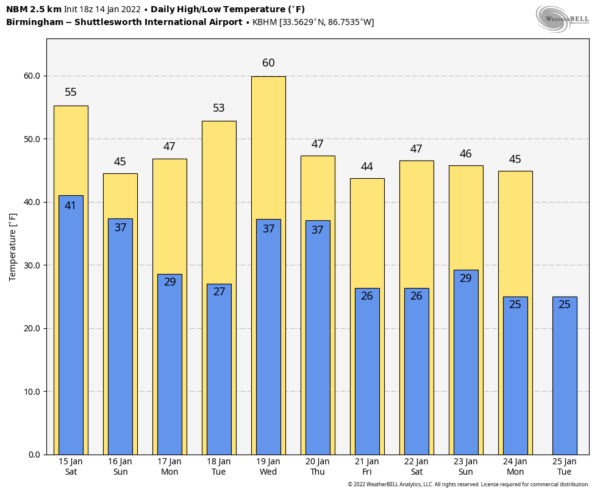 ON THIS DATE IN 1963: Birmingham dropped to 13 degrees as a cold wave was underway across the Deep South.