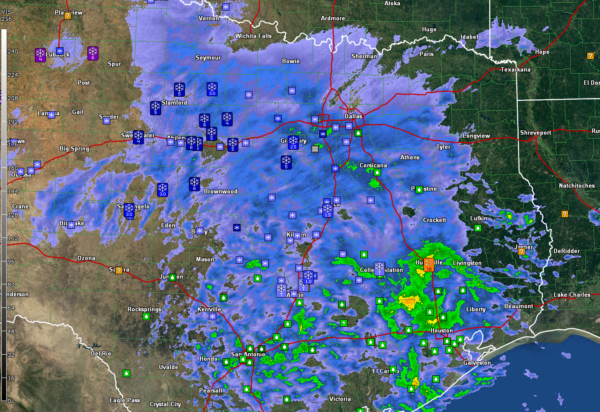 Heavy snow has been falling across parts of West Texas this morning as an upper-level disturbance sweeps southeastward into the area. The core of the upper disturbance is near San Angelo now.

The system has been overperforming so far.

1 to 2 inches was reported in the areas around Amarillo in the Texas Panhandle on the northern fringe of the precipitation shield this morning.

The snow has been heavier further south toward Lubbock. 3-9 inches of snow has fallen across a wide area around Lubbock this morning as the system has been moving a little slower than anticipated. 9 inches was reported near Denver City, in Yoakum County, northeast of Hobbs, NM. Lubbock has picked up around 4 inches, which is half of their annual average snowfall total.

The heaviest precipitation is now in the Dallas/Fort Worth area.
…Heavy snow at Fort Worth now.
…Rain and snow at Dallas that will be changing to all snow shortly
…Up to one inch is expected in the Fort Worth and Dallas areas, with 1-2 inches in the areas just to the south
…Just southwest of the Metroplex, 5 inches at Chalk Mountain in Erath County
…2.5 inches on the ground at Granbury southwest of Fort Worth

Closer to Austin, the precipitation is falling as snow in Waco, Austin, and Killeen.
…Snow covered roads in Williamson County near Hutto
…Some amounts less than 0.5 inch near and west of Austin
…Near Waco, Woodway has picked up 1.5 inches in just 2 hours

The rain/snow line is about 70 miles northwest of Houston.
…Snow is falling in Bryan, TX now
It is sleeting in Huntsville, TX now

The precipitation will spread into the rest of northeast Texas, northern Louisiana, northern and Central Mississippi, and northwestern Alabama later today, tonight, and Monday morning.

In Alabama, the system will arrive after midnight tonight. Our forecast thinking remains the same for our state. Precipitation will likely begin as snow or sleet before sunrise on Monday morning across our western and northwest counties, then gradually mix with rain, becoming all rain towards noon on Monday as temperatures rise across the area. 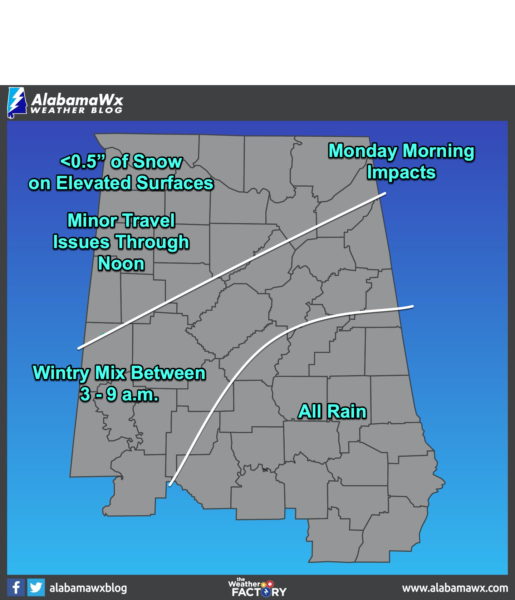 Impact Areas:
A trace to one-half inch of accumulated winter precipitation is possible along and northwest of a line from Vernon (Lamar County) to Jasper (Walker County) to Fort Payne (DeKalb County). Some locally higher amounts will occur in higher elevations of North and Northeast Alabama.

Areas with the best potential for accumulating wintry precipitation and potential impacts include Marion County, Winston County, Lamar County along with most of Fayette County and portions of Northwest Pickens County and the northwest half of Walker County up into the Tennessee Valley Counties, including Colbert, Lauderdale, Franklin, Cullman, Limestone, Lawrence, Madison, Jackson, Marshall, and DeKalb.

Minor travel impacts will be felt across Northwest and North Alabama where mostly snow falls and those half-inch snow accumulations occur.