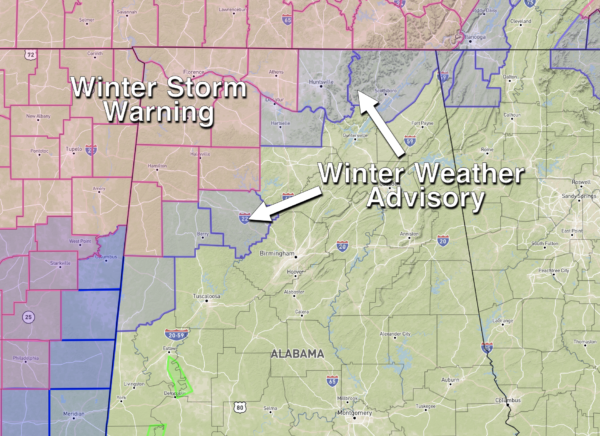 A large area of snow and sleet is moving into Northwest Alabama, and will continue tonight. Snow amounts could exceed three inches around Florence and Muscle Shoals… amounts of 1-2″ are possible down to places like Hamilton and Haleyville. A “wintry mix” is possible across the winter weather advisory area for a few hours, but precipitation there should change to rain later tonight as warmer air creeps northward.

Road conditions will deteriorate across the winter storm warning area over the next few hours as snow and sleet will increase in intensity.

To the south, a cold, soaking rain is likely for places like Birmingham, Tuscaloosa, Anniston, Gadsden, and Montgomery tonight. Rain amounts of 1-2 inches are likely. And, for far South Alabama, severe thunderstorms could become an issue tonight. SPC maintains a “slight risk” (level 2/5) for Mobile and Baldwin counties… with a “marginal risk” (level 1/5) up to U.S. 84. Storms over the southern part of the state tonight could produce hail and strong winds, and an isolated tornado or two is not out of the question. 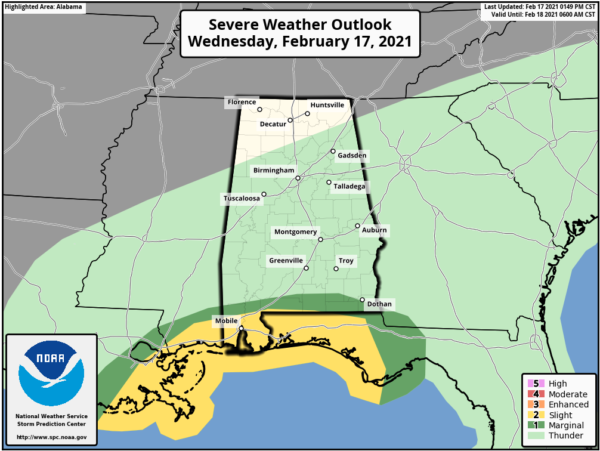 Severe storms remain possible tomorrow morning over the southeast corner of Alabama, but the threat should be over there by noon.

TOMORROW: The day will be cloudy and cold with scattered light rain or snow flurries; temperatures will hold in the 30s over the northern third of the state, with 40s for Central Alabama, and 50s to the south. Flurries remain possible tomorrow night as another shot of colder air moves in.

FRIDAY AND THE WEEKEND: Friday will be dry… the sky becomes partly sunny by afternoon. Temperatures will be similar to what we expect Thursday, about 15-20 degrees below average for mid-february in Alabama. With a clear sky, we project a low in the 18-25 degree range Saturday morning. Then, a deserved warming trend begins as temperatures rise into the low 50s Saturday, and low 60s Sunday with a good supply of sunshine both days.

NEXT WEEK: A Pacific cold front will bring a few showers Monday… otherwise the rest of the week looks dry and very pleasant with highs generally in the 60s. See the Weather Xtreme video for maps, graphics, and more details.

ON THIS DATE IN 1958: From the 14th through the 17th, one of the most significant snowstorms of the mid 20th century struck the northeastern U.S. The storm produced 30 inches of snow in the interior of New England, including more than 19 inches in 24 hours at the Boston Airport. The same storm produced up to three feet of snow in the Middle Atlantic Coast Region, with 14 inches at Washington D.C., and 15.5 inches in Baltimore, Maryland. The storm resulted in 43 deaths and 500 million dollars damage over the Middle Atlantic Coast States.