HOT: Temperatures are mostly in the 91 to 98 degree range across Alabama this afternoon with a mostly sunny, hazy sky. Dewpoints remain in the 70s, and the heat index is over 100 in most places. A heat advisory is in effect for most of the state, and cooling showers are very hard to find on radar. Isolated showers will end this evening, and tonight will be mostly fair with a low in the 70s. 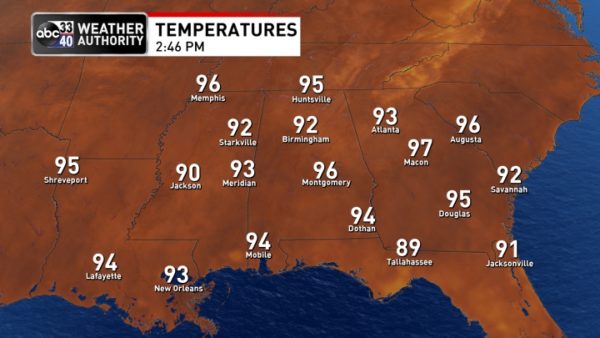 REST OF THE WEEK: Heat levels won’t change much through Friday, with partly sunny days and fair nights. There is always some risk of a pop-up afternoon storm in this kine of pattern; higher odds of any one location seeing a shower will be Wednesday and Thursday (25-35 percent) as the air aloft will be slightly colder on those two days, making the air a bit more unstable. But, the overall pattern won’t change much with the strong upper high overhead.

THE ALABAMA WEEKEND: Temperatures will likely back off a few degrees over the weekend, with highs between 90 and 94 Saturday and Sunday. The sky will be mostly sunny both days, and showers will be very hard to find, most likely.

NEXT WEEK: The summer pattern will hold with the upper high over the southern U.S. Look for partly sunny, hot, hazy days with just widely scattered afternoon storms around. Highs will remain in the 90s, and it is likely that temperatures will remain above average through the rest of June. See the Weather Xtreme video for maps, graphics, and more details. 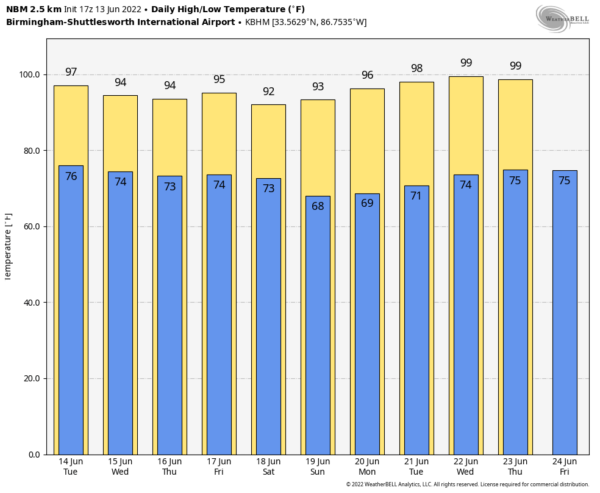 TROPICS: A broad area of disturbed weather is located over the southwestern Caribbean Sea, associated with a surface trough of low pressure. Some slow development is possible, and a tropical depression could form by late this week if the system remains over water. The disturbance is expected to move northwestward near the coasts of Nicaragua and Honduras during that time. Regardless of development, this system could produce periods of heavy rainfall across portions of eastern Nicaragua and eastern Honduras late this week. NHC gives the system a 40 percent chance of development over the next five days.

If anything does form in this region, it most likely will wind up in the far Southwest Gulf of Mexico, then moving into Mexico well south of Texas. The northern Gulf Coast (places like Gulf Shores, Destin, and Panama City Beach) should not have any tropical trouble through the next seven days.

ON THIS DATE IN 1972: Severe weather conditions over the Yucatan peninsula in Mexico begin to converge and form a tropical depression that would become Hurricane Agnes over the next two weeks. This hurricane affected most of the eastern United States with the Northeast being the hardest hit area with heavy rainfall.

ON THIS DATE IN 1976: A deadly tornado moved across parts of the southwestern Chicago, Illinois suburbs killing three people and injured 23 others. The tornado, with winds over 200 mph moved from Lemont to Downers Grove causing $13 million in damage when 87 homes were destroyed, and another 90 were damaged. The tornado passed over the Argonne National Laboratory, peeling part of a roof of the building housing a nuclear reactor.