Our hearts are heavy tonight as we see pictures and video of damage coming out of northeast Texas and southeastern Oklahoma tonight from destructive tornadoes this afternoon and evening.

Perhaps the hardest hit is Idabel, Oklahoma, which took a direct hit from a strong tornado. There is significant damage including homes, businesses, churches, and a country club that were damaged or destroyed. A weather station in Idabel recorded a wind gust to 108 mph.

This is Trinty Baptist Church in Idabel OK tonight @vondcastor: 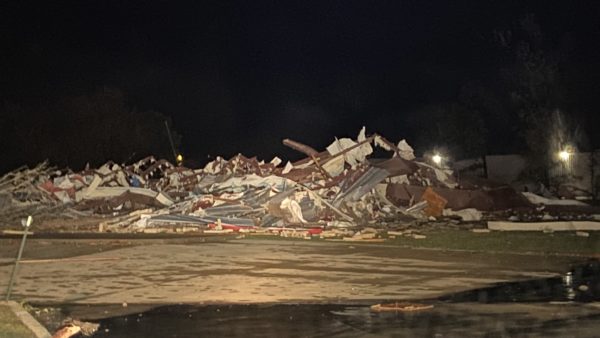 There was extensive damage to homes just west of Paris, TX from a tornado. Another tornado passed just west of Sulphur Spring, TX also along I-30.

The town of Hughes Spring in Cass County, Texas has significant damage inside their city limits.

I-30 Eastbound is partially open now in the New Boston, TX area after being blocked by trees in that area from a tornado that crossed the highway earlier this evening. There is lots of damage in the New Boston area. There are a couple of shots of a big tornado on the ground near New Boston at the time. 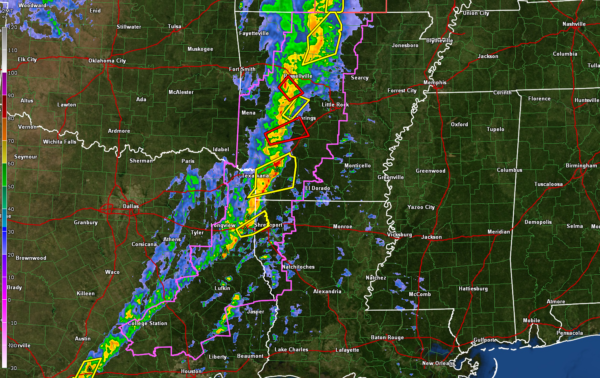 The good news is that things are transitioning to more of a wind damage threat as the discrete storms evolve into a squall line, as we expected. Just 2 tornado warnings now, which is the least number in quite some time. Our line of storms extends now from Northwest Arkansas near Russellville to the southwest of Hot Springs to Texarkana, to Longview, back to the College Station area. There is a possible tornado approaching Russellville and another heading toward Greenwood. Another is moving toward Malvern and Lake Hamilton and Hot Springs. Both of the storms are looking less impressive on radar but still could produce a tornado.

The squall line will continue to push eastward along I-20 overnight. It should reach Shreveport around 10 p.m., Monroe about 1 a.m., Jackson around 5:30 a.m. and into West Alabama around Sumter County around 9-10 p.m. and Birmingham shortly after noon.

The line will weaken slowly overnight and severe weather is not expected in North or Central Alabama tomorrow. There is a small chance of severe weather in Southwest Alabama.