MILD NOVEMBER WEATHER: Most of Alabama will stay dry today; with a mix of sun and clouds we project a high between 75 and 78 degrees for most communities this afternoon. The average high for Birmingham on November 9 is 68.

Moisture levels will increase over the next 48 hours, and we will bring in a chance of showers tomorrow afternoon. Showers will remain possible tomorrow night and Wednesday ahead of a cold front. A few isolated thunderstorms are possible as well, but no severe storms are expected. Rain amounts will be generally in the 1/2 inch range before drier air returns Wednesday night. Highs hold in the mid to upper 70s tomorrow and Wednesday.

Then, Thursday and Friday will feature a good supply of sunshine both days with lower humidity levels and cooler nights. While highs will remain in the 70s, morning lows will drop into the upper 40s and low 50s by Friday.

THE ALABAMA WEEKEND: There is great uncertainty in the forecast for the weekend as model diverge significantly with Tropical Storm Eta. For now we will leave the weekend generally dry, with just an outside risk of a shower Sunday. But, understand the forecast could change dramatically in the days ahead. Highs will hold in the 70s.

NEXT WEEK: With the model struggles it will be hard to be specific with the weather situation next week, but the pattern favors some potential for highs to drop into the 60s by mid-week, with lows in the 40s. See the Weather Xtreme video for maps, graphics, and more details.

TROPICAL STORM ETA: Eta is in the Southeast Gulf of Mexico this morning with sustained winds of 65 mph. It could become a minimal hurricane tomorrow and Wednesday, before weakening again later in the week. Steering currents collapse, and the system will meander around the southern or eastern Gulf of Mexico for most of the week. 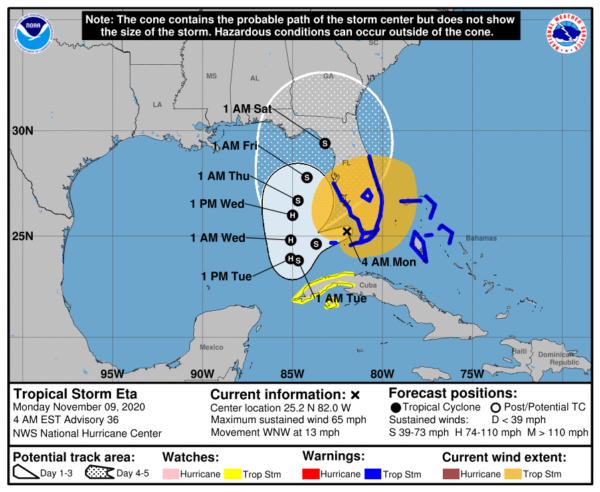 We need to point out there is major model divergence on the future of ETA. The American global model (the GFS) ultimately pushes it to the west, and the north, while the European model (ECMWF) moves the system toward North Florida, north of Tampa, late in the week. The NHC track could change significantly as we get better clarity in coming days. It is still really too early to know what, if any, impact Eta will have on Alabama and the Central Gulf Coast. If there is a direct impact, it will involve rain, and most likely not wind.

Elsewhere in the tropics, Showers and thunderstorms associated with a non-tropical low pressure system located several hundred miles southwest of the
Azores continue to get gradually better organized. Further development is expected, and a tropical or subtropical storm will likely form during the next few days while the system moves eastward or east-northeastward over the northeastern Atlantic Ocean. This one is no threat to the U.S.

And, A tropical wave is forecast to move over the central Caribbean Sea, where an area of low pressure could form in a couple of days. Environmental conditions are forecast to be conducive for development, and a tropical depression could form late this week or over the weekend while the system moves slowly westward. Too early to know if this will impact the Gulf of Mexico or the U.S.

ON THIS DATE IN 1926: An estimated F3 to F4 tornado tore through La Plata, Maryland, killing 14 individuals at a small school. This storm caused 17 deaths and injured 65 others.